The opening scene is one of them tours of force that you gotta be impressed by. For a good ten minutes or more, there is no dialogue, no narration, no explanation. Just my man Charles the Mechanic, spying on a guy, then going into the guy’s apartment, fucking with his teabags, putting explosives in his books, etc. Setting things up. Then blowing things up. All in a day’s work when you are a mechanic who doesn’t fix cars. 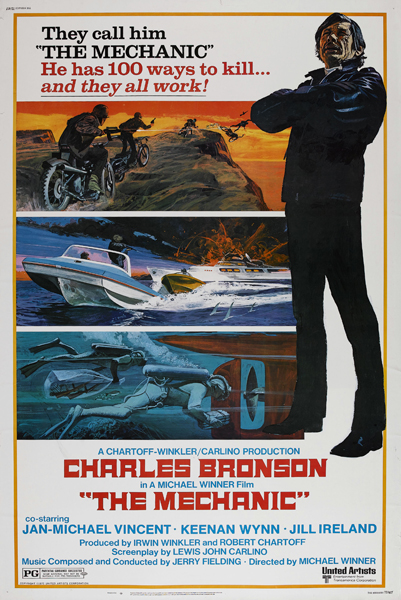 Then we follow Charles back to his home. Not the ratty apartment he spied from, but a nice place with lots of fancy crap including Hieronymous Bosch’s The Garden of Earthly Delights hanging on the wall. They never say it’s the original, but why would this guy have a reprint? I’m guessing he stole the original and replaced it with a fake. Good job, Charles.

As the story unfolds, Charles gets more jobs, and we get to watch him do his thing. This is not a guy who settles for just shooting a guy or poisoning him or something. If he takes the job, you bet it’s gonna be fun to watch. He nearly gives an old man a heart attack, shooting at him but pretending he’s shooting at somebody behind him who’s also shooting at him. This is all fine and dandy but after he kills the guy, he makes the mistake of hanging around his spoiled blond bitch of a son, Jan Michael Vincent. And it seems like he actually likes the kid. He starts bringing him along on jobs, showing him the tricks of the trade.

In this movie Charles Bronson is just Charles Bronson. Don’t bother trying to pretend he’s some new character, what’s the point? But they do give him one tiny little thing: he carries around a ball of wax that he likes to squeeze in one hand. Makes him think, or relieves stress or something. Also he brings Jan Michael to a wax museum to look at dummies of famous tyrants and philosophize about death and murder. That made me think of House of Wax, a great 3-D Vincent Price movie where Bronson played Igor back when he was still Charles Buchinsky.

The directionist is Michael Winner, the Brit who later directed Bronson in The Stone Killer and the Death Wish series. The combination of Winner and Bronson is great. The whole thing is very artfully put together with lots of quiet moments that build to the exciting assassination sequences which inevitably involve a boat blowing up or one of those shots where a car drives off a cliff and you get to watch it fall and fall and bounce and flip and roll and break apart into a thousand pieces. And you think man, that must’ve been cool to watch in person. I’m glad they filmed it so I could watch too. You don’t get one of those badass funk rock scores you sometimes got in the ’70s, but instead a kind of Bernard Herrmann-like orchestral deal, which maybe works even better for this kind of thing.

And wait until you see the motorcycle scene.

There’s a trailer on the DVD which seems to indicate that the movie was re-released as Killer of Killers after the success of Death Wish, with the tagline “He kills the people you wish you could kill.” They act like he’s just some dude that goes out and kills mobsters. But don’t worry. He’s not a vigilante or a crook who suddenly grows a set of morals. They don’t try to justify what he does. He’s just a regular asshole doing an asshole job.

This is grade A badass Cinema. I wish they still made ’em like this.

Charles Bronson Jan-Michael Vincent Michael Winner
This entry was posted on Sunday, July 18th, 2004 at 6:09 pm and is filed under Action, Reviews. You can follow any responses to this entry through the RSS 2.0 feed. You can skip to the end and leave a response. Pinging is currently not allowed.

3 Responses to “The Mechanic”