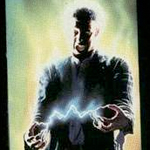 One thing I had no memory of: the first 20 minutes take place in the 1950s. A young couple, Brian (Brian Bremer, SILENT NIGHT, DEADLY NIGHT 5) and Peggy Bell (Stacy Edwards, THE BLING RING [Sofia Coppola version]), who could almost be the parents from BACK TO THE FUTURE, have volunteered for an experiment where they will try to survive a nuclear blast protected by a bunker and a radiation immunization. (TIP: Do not fucking take that gig, I don’t care if you’re trying to fund EL MARIACHI!) After surviving the test they’re lionized as American heroes in a news reel, declared radiation free and “the world’s first nuclear family.”

But behind the scenes we see the panic when it’s discovered that Mrs. Dale is pregnant. Because they had alot of time down there, it is pointed out. A big table full of men in uniforms (one of whom is Dick Butkus I believe) discuss whether or not she’ll have an abortion. In a nicely paranoid touch the final decision falls to a man whose face is always hidden in shadow, even at meetings. It seems like even if you ran into this guy in town or at the grocery store the light would always fall on him in such a way that his face is completely in the dark. His face is made up of the opposite of the contents of the briefcase in PULP FICTION.

(If his identity was later revealed, which I’m guessing it was, I didn’t follow it. So until someone explains it to me I’m gonna assume it was Breathless Mahoney in disguise.) 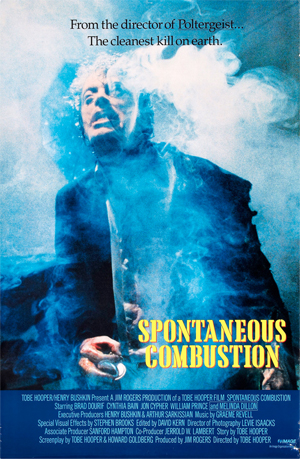 The men decide sure lady, we will allow you to give birth. And she does. But immediately after the proud parents get to hold their baby for the first time they both burst into flames and are completely barbecued. Which is a bummer. This could really be a PR nightmare.

A scientist who studies the charred corpses seems downright delighted to be witnessing a rare case of “SHC – spontaneous human combustion.” He pokes into one of the burnt up heads and pulls out a tiny, shrunken skull. This must be a thing that supposedly happens in supposed cases of this phenomenon, but it goes unexplained here. Strictly for the SHC buffs, I guess. This one is for the fans, by the fans.

That whole section is actually pretty slick filmmaking from Hooper. But most of the movie is about that baby, Sam, now grown up into Brad Dourif. He’s working at a college, unaware of his unusual background. Like his peers, he’s preoccupied with protesting a nearby nuclear power plant that goes online tonight at midnight. He’s about to go online too, he just doesn’t know it.

There has been a rash of people dying alone in fires. Sam is freaked out because he knows these people. In fact, he had very recent arguments with every one of them. A series of people he gets heated with end up getting… heated. Oh shit! He realizes he’s a firestarter, but with no control over his powers at all. Sometimes his hand just turns into a torch. As the mess he’s in gets worse, he turns into a worse mess, his body kind of doing a poor man’s THE FLY, physically falling apart as his powers develop. And Dourif starts to get more into his wheelhouse, being a sweaty, yelling weirdo instead of the weinery milquetoast he started out as. When he’s limping around, moving weird, made up to be skeletal, he hints at the Hitchhiker/Chop Top type of character that can often steal a good Tobe Hooper film. Which, unfortunately, this is not.

By the way, don’t you think that even if “Spontaneous Combustion” wasn’t already a phrase that meant “people exploding,” that it would be a good name for a dance squad or a cappella group?

Like the great Hooper movies, this is kind of a slow descent from normal-ish life to feverish, gibberish-spewing madness. Like LIFEFORCE, it’s a story that devolves into a bunch of super powers and energy blasts. Toward the end it starts to unspool a conspiracy around Sam, including that his girlfriend Lisa (Cynthia Bain, PUMPKINHEAD) also has powers and was deliberately set up with him to look after him. He finds himself drawn to a strange mansion with checkerboard floors (possibly Twin Peaks influenced visuals I suspect) where a crazy old man (William Prince, NETWORK, THE JERICHO MILE, THE GAUNTLET), playing I-don’t-know-which character from the opening sequence (I’m guessing either the shrunken skull scientist or the shadow face guy), is thrilled to see him and considers him his son because it was his experiment. All this weirdness piqued my interest a little, as did the people-on-fire effects, but I had so completely lost investment in the story that I wasn’t really clear what the fuck was going on and didn’t feel much urge to figure it out.

It should be pointed out that, as far as alleged strange phenomenon go, people suddenly catching on fire for unexplained reasons is not one of the more cinematic ones. It’s just over too quick. I guess Hooper and his co-writer Howard Goldberg show some imagination in trying to come up with a cause for such a thing to happen, but not enough to make this exciting.

Hooper is a strange case. He directed a couple of my absolute favorite movies of all time, and a couple other ones that are good or interesting. That’s not even including his disputed direction of POLTERGEIST, one of the few ghost movies I can fully embrace and pretty much universally considered a classic by people on either side of the would/wouldn’t watch a movie with ‘CHAIN SAW’ in the title dividing line. And yet most of his filmography is just sloppy, lifeless stuff that you would never think came from a great director. This one is at least weird enough to be of some note, but it still fits into that last unfortunate category.

I didn’t even think about this until looking at his filmography right now, but SPONTANEOUS COMBUSTION is incredibly depressing when you consider that it’s his follow up to THE TEXAS CHAINSAW MASSACRE 2, which I consider an out-and-out masterpiece. This is only four years and three TV episodes (including the pilot of Freddy’s Nightmares) later, yet Hooper seems to be running out of creative energy and almost entirely spent of storytelling prowess. This kicked off a period of working on TV (including some pretty good shows, like Nowhere Man) and occasionally showing sparks of inspiration. Like I thought TOOLBOX MURDERS was pretty good, 14 years later. But never anything approaching TEXAS CHAIN SAW good. That Tobe Hooper I don’t expect to see again.

You never know, though. If people can just spontaneously combust for no reason then maybe Hooper could make a great movie out of nowhere. That certainly would light my fire.

Brad Dourif Brian Bremer Cynthia Bain Dick Butkus Stacy Edwards Tobe Hooper
This entry was posted on Thursday, September 15th, 2016 at 1:14 pm and is filed under Horror, Reviews, Science Fiction and Space Shit. You can follow any responses to this entry through the RSS 2.0 feed. You can skip to the end and leave a response. Pinging is currently not allowed.