First and best is a goofy comedy called DEATH CHEATERS. The title daredevils are played by the mustached John Hargreaves and the bearded Grant Page. Page seems kind of like the sidekick here, but in reality he was and is one of Australia’s top stuntmen. He was the movie’s stunt coordinator and had already done the same for Trenchard-Smith’s THE MAN FROM HONG KONG. He even did the hang gliding for that one as you can guess when you see him do the same in this one. Later he would be the stunt coordinator for MAD MAX 1 and 3. He seems like a goofy kind of Jim Henson creative countercultural type in this, so it never occurred to me that he’s the crazy bastard stalking Stacy Keach in the excellent ROAD GAMES. 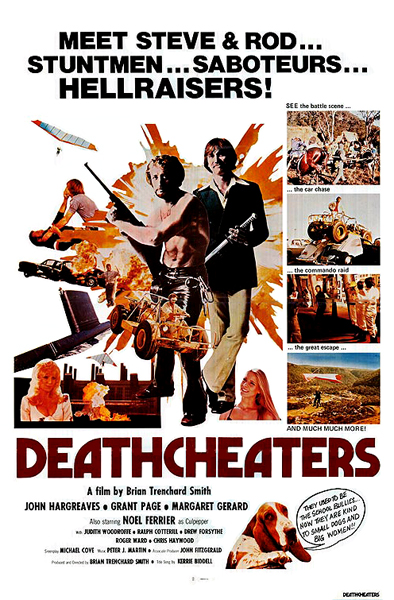 Anyway they’re playing a couple of stunt men who we learn from flashbacks were war buddies who once did all kinds of dirty special ops deeds, but vowed never to kill again. The stunt life is fun but isn’t quite enough death cheating to satisfy their adrenaline habits, and the local cops take advantage of that, strategically letting them know about crimes in progress so they’ll get involved. For example a cop chases some bank robbers right past their filming location, knowing they won’t be able to resist joining the chase. They use their weird all-terrain vehicle (a camera truck?) to catch up and throw a frozen lamb chop through the thieves’ windshield.

Eventually they get hired for a “freelance job” from a mysterious secret agency. They have to sneak into a base in the Phillipines and steal some documents. Along the way there is some hang gliding, submarining, dangling from heights and bombing lots of shit. Also the guy with the mustache has to placate his wife and the guy with the beard tries to get laid. This could still be a serious plot for a movie, but it goes for comedy. Some of it (the crazy German movie director in a beret) is embarrassingly broad, but most of it’s okay. Page especially has a good deadpan line delivery, and spends alot of the movie talking to his basset hound like it’s a person. I’m not sure why but the style of humor sometimes reminded me of The Monkees minus the laugh track.

STUNT ROCK has more of a following due to a DVD release and some screenings in Austin, L.A. and here in Seattle. Page returns, this time playing himself. He leaves Australia to work on a cop show in Hollywood and while he’s there he hooks up with his (not in real life) cousin, who plays in a cheesy wizard-themed rock band called Sorcery. A good chunk of the movie is concert footage of these guys. They have a dude dressed as Merlin who fights against their singer, holding a crystal. They also do various Alice Cooper/Kiss type shit with people being executed on stage and what not. Off stage they like to do magic tricks and escape-artistry. They have the type of hair and clothes that only a rock band would ever wear, but they’re huge nerds. They even have a keyboard player who always wears a hood and has a distorted voice. You know these fuckin guys play Dungeons and Dragons. 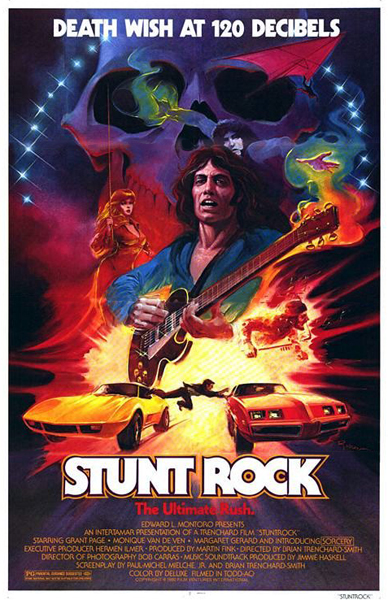 Page hangs out with the band and also tries to teach his co-star and a journalist about stunts. It keeps cutting to stunt footage from other movies including DEATH CHEATERS. The end.

It’s an undeniably weird mix of ingredients. Rock + magic + stunts = what the hell. So that’s the reason for the cult following. And it’s interesting to watch Page, more of a cool celebrity dude in this one (no basset hound), talk about his work and why he does it. Parts of it are like a documentary. DEATH CHEATERS acts like a stuntman’s life is all fun and games, just a couple buddies who like to jump off of shit and throw each other through tables. This one has a little bit about how they get treated bad by directors and don’t get the credit they deserve since they’re doubles.

So this is a unique movie, totally worth watching, but I gotta admit it didn’t live up to my hopes, because a friend of mine has a STUNT ROCK poster that gave me the wrong idea. Above a cool painting of the band it says DEATH WISH AT 120 DECIBELS! That means “Grant Page is crazy, he must have a death wish!” but unfortunately I took it to mean “this movie is like the movie DEATH WISH! Only with guitars!” I thought it was a rock band who also work as stunt drivers. But maybe their bassist or road manager or somebody gets shot in a drug deal gone bad. So the rest of the band goes after the drug gang, or maybe the whole cartel. Maybe they plan their tour dates around the locations of the people they gotta get revenge on, moving their way up the pyramid. And they also do side wheelies and motorcycle jumps. Their tour bus probaly flies off a cliff and blows up. Then there’s a big concert at the end.

Well, there’s plenty of concert in this one, in fact way too much concert. Just no revenge.

On Youtube I saw Brian Trenchard-Smith introducing the movie in L.A. He’s real self-deprecating and laughs about the movie but I was still kind of put off by what seemed to me like smarmy laughter from the audience. I mean, the guy’s standing right there, his movie is entertaining you, you don’t have to act like you’re above everything. I say honor what is awesome in the movie, or be disappointed that it’s not awesome enough, but don’t give me that “ha ha, so bad it’s good” shit. Anyway, I learned that

There are alot more heavy stunt movies I should get into, particularly in the area of car movies. But as not-great as these two are there is definitely an appeal to movies where the stunt people are the stars. That’s part of what I liked so much about DEATH PROOF. You got this character you’re enjoying watching and then you know it’s not fake, it really is the same person sliding down a rope or hanging on a ledge or whatever. These two have already blurred together, but I believe it was STUNT ROCK where Page talks to a woman by suspending himself in mid-air outside of the tall building where she lives. Obviously it’s fantasy that he would do something like that in his every day life, but there is a reality there because you know he’s really doing it for this movie.

But for my tastes I’d prefer to see those skills used in a serious action or revenge type plot. DEATH CHEATERS has a lighthearted adventure plot, STUNT ROCK has a lighthearted, uh, well, no plot. And the rock band is funny for a minute but I don’t really want to sit through all that. So like alot of cult movies I gotta admit I appreciate these more for the idea of the movie than for the actual movie. The fact that they exist is more interesting than actually sitting and watching them (especially with STUNT ROCK). But it’s the thought that counts I guess.

Australian cinema Brian Trenchard-Smith Grant Page John Hargreaves stuntsploitation
This entry was posted on Wednesday, April 15th, 2009 at 12:56 am and is filed under Action, Music, Reviews. You can follow any responses to this entry through the RSS 2.0 feed. You can skip to the end and leave a response. Pinging is currently not allowed.

12 Responses to “Deathcheaters and Stunt Rock”