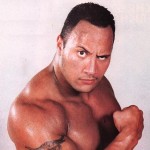 Holy shit, how are you reading this with your eyes closed? I didn’t say you could open them. This is weird. Well, I’m not sure exactly what to say about these amazing powers of yours, so instead I will ignore them and just go ahead and review the movie. Even if you don’t close your eyes, if you make a list of everything you expect to happen in a movie like this, you’d probaly get to cross off everything on the list.

You got the visionary coach who talks The Man into supporting his program. The higher-ups who don’t believe in him at first but are ultimately won over. The disastrous first game where they lose and want to give up. The lovable fat kid who needs to learn to believe in himself. The guy who is too much of a fuckup so they don’t let him on the team but he shows up anyway and proves himself. The part where the coach is too much of an asshole and disillusions the team. The parts where the program gets shut down and the coach has to figure out how to bring it back from the dead. The fights with loved ones who at the end silently show that they’ve changed their minds by showing up to watch the game. And it goes without saying that you have the tense clock-beating come-from-behind-at-the-last-possible-second victory against a bitter rival. And the explanations at the end of what happened to each character (although in this case The Rock narrates it instead of it being written on the screen). And there’s an insipid score that redundantly tells you how triumphant and heartwarming this all is. Now THIS is a movie that could’ve used a soundtrack by RZA.

But one unexpected thing does happen during the end credits: they start showing footage of the 1993 TV documentary that the movie is based on, and you realize that they weren’t lying about this being a true story. Maybe they just chose the clips well, but you see these scenes and exact dialogue that seemed corny and cliche in the movie, and it turns out that they really happened in real life, and there’s footage to prove it. Even the boy-faced token white kid who I assumed was a Hollywood invention turns out to be a real guy, who really looks like that, and really gets emotional talking about how the football team improved his relationship with his mom. The real coach doesn’t look much like The Rock (he’s a white dude with a mustache) but he has a similar tough-guy motivational speaker vibe and makes the exact same speeches that The Rock made.

So why the fuck make a movie based on a movie? This documentary already exists, apparently, put it out on DVD and I’m sure we’ll all enjoy it more than the fake re-enactment. Well, there’s exactly one reason to make this movie: The Rock. To showcase The Rock, and to inspire The Rock.

Apparently they’ve been trying to make this movie for years, at various times starring Bruce Willis, Nic Cage or Sylvester Stallone. And I like all those guys but I can’t imagine any of them pulling it of like The Rock. This is a guy who sweats positivity. Now days most of our heroes are cynical tough guys with a pessimistic view of the world. And I’m not complaining. But here is a good old fashioned “believe in yourself” cornball hero, the Mr. T type of hero who is gonna come in and save the community center and get the kids off the street and help an old lady carry her groceries home. It used to be that was expected of heroes, so you saw it too much and it was phony. But now it’s kind of a risk to play a character like that. Luckily, The Rock is exactly the guy to make it believable. I have read that the movie is very personal to The Rock because he got into alot of trouble with the law when he was a teen and he feels that his high school football team is what turned him around.

But I don’t think you’d need to know that about The Rock to see that he really believes in what this movie is saying, it’s not just a job to him.
At his side you also have the rapper Xzibit as the assistant coach. Although he is best known to America for facilitating the pimping of rides (and to me for providing vehicles to Ice Cube in XxX STATE OF THE UNION) this is another tough cookie who came from a violent background and he is very believable in the role. He doesn’t get a huge amount of dialogue though (they even cut out some of what you see in the trailer) but he looks good at The Rock’s side.

Speaking of looking good, I don’t want to sound gay, but it’s 2006 so who gives a fuck if I sound gay. The Rock is the best dressed former wrestler of all time. I’m not criticizing any other former wrestlers, but the world of wrestling has its own sense of fashion that looks silly to the outside world (just like funk music, Serenity, anime, or the evil clowns with the giant pants) and most of the guys retain some of that when they move on. But not The Rock. There aren’t very many musclemen that can not look ridiculous in a suit or a nice shirt, but The Rock pulls it off with class. He’s like George Clooney crossed with He-Man.

Anyway, that’s not important, and neither is this movie. Of course I like the message, and it’s always moving to see two rival gangbangers working together and becoming bros. It’s just like that part in INDEPENDENCE DAY where the Israelis and Palestinians work together to fight the aliens, except not stupid. But the one and only unique ingredient in this movie is The Rock. And it proves that The Rock is a winner.

You can do it, The Rock. I believe in you. You’re good in crappy action movies, as the hero or the villain. You’re good at comedy, like that role in BE COOL. Now you’re good in a serious drama that means something to you personally. I think you’ve gone through the 36 chambers of Shaolin now, you’ve proven your skills. Now it’s time to live up to your potential. It’s time to start making truly good movies. Even great ones. Go the George Clooney route, figure you have enough money and now only do roles you really believe in. Some of them should be action movies though, because you’re good at that. Just make sure they’re topnotch.

When you die, do you want people to say, “THE RUNDOWN was surprisingly good, he was great in it, although I hate Sean William Scott”? Or do you want them to list off their ten favorites from the long line of classics you did?

You can do it Dwayne. Believe in yourself and knock us on our asses.

The Rock Xzibit
This entry was posted on Friday, September 15th, 2006 at 11:48 pm and is filed under Crime, Drama, Reviews, Sport. You can follow any responses to this entry through the RSS 2.0 feed. You can skip to the end and leave a response. Pinging is currently not allowed.