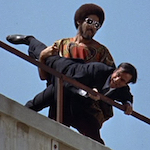 And fortunately that’s not too exaggerated an image of Samson (Rockne Tarkington, THE GREAT WHITE HOPE, BEWARE! THE BLOB, DEATH BEFORE DISHONOR), though unfortunately he never walks around town with his lion companion, Hudu. The cat stays at the bar that Samson owns and operates, laying on a table near the stage for the topless dancers. But Samson does take the big-ass wooden staff with the lion head carved at the top everywhere he goes, as well as using it to knock out troublemakers at the bar.

Like the guys in THREE THE HARD WAY he doesn’t have an official crimefighting job or anything. He’s just a bar owner who looks good in dashikis and jewelry and seems to have become the king of the neighborhood.

Locals say he “keeps the honkies off the street,” and he threatens a smack dealer trying to sell in his neighborhood, then tries to get help for him. He doesn’t have the superhuman strength of the Biblical/mythical Samson, but he’s a guy who gets jumped alot and always comes out on top. One attacker approaches him in an alley by pretending to be a panhandler. When Samson is through beating the shit out of him he gives him some change. “There’s the quarter you asked for.” 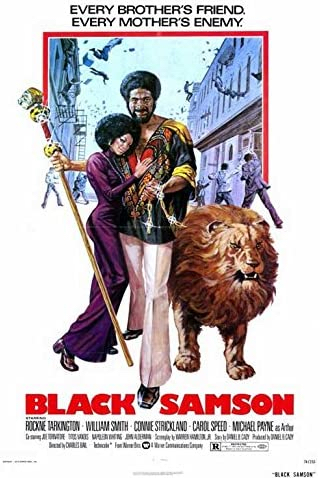 But there’s a mobster, Giussepe Nappa (Titos Vandis, THE EXORCIST), who wants to do business in Samson’s neighborhood, and thinks he can just pay him off. He sends his nephew Johnny (William Smith, ANY WHICH WAY YOU CAN), and Samson turns him down. As usual, Smith does way more with the role than whoever else might’ve gotten the role. When Samson shuts him down he’s able to laugh it off in a friendly way, seeming like maybe he’s not gonna be straight up evil. But when he’s in all white company he casually throws the n-word around – I believe he does that in 7 or 8 different scenes – and later he returns to the club to threaten Samson’s girlfriend Leslie (Carol Speed between DYNAMITE BROTHERS and ABBY). So the rage boils over and melts off the reasonable guy facade pretty quick, but he’s just a little more layered than the one-dimensional white bad guy you expect in these movies.

When the uncle sends a lawyer type (John Alderman, THE STUNT MAN) to make Samson another peaceful offer, Samson hangs the guy over a ledge like Suge Knight did to Vanilla Ice. So finally the boss is like Fine, Johnny. Try it your way. Part of his way is sending his girlfriend Tina (Connie Strickland, ACT OF VENGEANCE) undercover to try out as a dancer at Samson’s. She does it but pisses off Johnny by honestly telling him that Samson and Leslie are nice people. She tells him “He treats her like a queen,” with an implication that Johnny doesn’t do the same for her. He seems surprised and then one scene later he’s slapping and threatening her. Later, in a car, he makes her say “Johnny Napa is a sweet guy,” gives her a kiss, and throws her out the door into an intersection, prompting an offscreen voice to say, “Jesus Christ, did you see that shit? Somebody just dumped ‘er!”

(That’s not the only funny ADR line. Some guy that almost gets hit during a car chase grumbles “God damn Mario Andretti!”)

Samson is cool enough to visit Tina in the hospital, and when she confesses what she was up to he says he knows. (He’s like Blade. Way ahead of you.) She gets knocked around, but it’s kind of a better role than Speed gets. Leslie doesn’t seem to be based on Delilah – she arguably betrays him, but only trying to help. Her part is to do all the melodramatic crying and asking “Are you trying to be some kind of martyr?” and stuff. 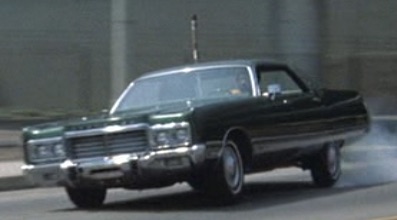 THREE THE HARD WAY was better in that it never bothered with that kind of “It’s too dangerous to be the type of character everybody came to this movie to see!” shit, and also because it had all the crazy Stunts Unlimited action scenes. BLACK SAMSON – with stunt coordinators Eddy Donno (BIG BAD MAMA, THE HITCHER, INVADERS FROM MARS, double for John Belushi in THE BLUES BROTHERS) and Ernest Robinson (CLEOPATRA JONES, HOOPER, double for Richard Pryor and Philip Michael Thomas) – doesn’t go nearly as hard, but it does have a fight break out in a funeral home and knock over some coffins, and there are some decent car chases. The best part about that is that Samson brings his staff with him and it’s so big it pokes out of the sunroof looking like a giant antenna.

The climax is really cool and mythic. Johnny and the boys show up in the neighborhood and suddenly the locals – like, all of the locals, it seems like – come out onto the roofs, windows and fire escapes of the buildings. I wondered if this inspired a similar scene in THE METEOR MAN, but then it gets cooler: they’re chanting “Samson!” and throwing garbage down into the street. And they brought a whole lot of stuff up there! They’re just raining junk and furniture and entire doors and mattresses and shit onto them. The music stays upbeat even though the mobsters shoot several innocent people.

When Samson walks out into the street and holds up his staff, it all stops and turns quiet, and he gets to have a duel with Johnny, who starts yelling about “your people” and his favorite word staring with the letter ’n’. And they actually get to have a gladiator style duel. It’s a really cool ending except that Hudu never shows up, never eats Johnny’s face off or anything.

I guess the Biblical Samson tamed a lion with his bare hands – that lion never ate anybody. But that shouldn’t matter since this doesn’t follow other famous aspects of the Biblical story like the long hair that gives him strength, or defeating the Philistines with the jawbone of a donkey. Unless that was one of the things somebody threw off the building, maybe.

BLACK SAMSON was directed by veteran stuntman Charles Bail (CLEOPATRA JONES AND THE CASINO OF GOLD, THE GUMBALL RALLY, STREET CORNER JUSTICE) around the same time he was stunt coordinator on FREEBIE AND THE BEAN. It was written by Daniel Cady (GARDEN OF THE DEAD, KISS OF THE TARANTULA) and Warren Hamilton Jr. (later a sound editor on multiple movies by John Carpenter, Joe Dante, Tim Burton and others). It’s the only movie with a score by New Orleans legend Allen Toussaint, so it has a pretty good theme song.

Like many movies of the genre, this makes you watch some gross racism and misogyny without necessarily commenting on real societal problems (since the racist guy’s already a bad guy for being a mobster). It’s not a movie with much depth, but it has a cool hero with unique Afrocentric style, and a well-played, hissable villain who gets a good comeuppance. So it delivers on the badass wish fulfillment of a guy who looks like that kicking ass, which was the arrangement, after all. I enjoyed it.

Allen Toussaint blaxploitation Carol Speed Charles Bail Connie Strickland Daniel Cady Eddy Donno Ernest Robinson John Alderman Rockne Tarkington Tito Vandis Warren Hamilton Jr. William Smith
This entry was posted on Tuesday, August 4th, 2020 at 12:45 pm and is filed under Action, Reviews. You can follow any responses to this entry through the RSS 2.0 feed. You can skip to the end and leave a response. Pinging is currently not allowed.

One Response to “Black Samson”