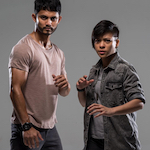 And one of them asks, “You want to avenge your sister, don’t you?”

It takes a bit to piece it together. The woman who lost the opening fight to dirty tricks was Hassan’s sister Zain (Fify Azmi). Don’t worry, she’s still alive. But she’s in deep shit with crime lord Raja (Dain Said) because she bet money she didn’t have on herself.

Hassan wants Zain and their dad Munas (Hilal Azman) to move out of the projects to live with him, but Zain won’t even speak to him, still pissed that he left her behind eight years ago. He goes to Raja, who he knows from his fighting days, to ask for a break. He turns almost boyish as he says, “Um, Mr. Raja, I come with a humble request.”

Even after rejection and getting jumped by a dozen thugs, Hassan thinks Zain and Raja can work something out. But things escalate. Before long he and Zain are both back in the ring, fighting together. As much as WIRA is pleasingly based in familiar action conventions, that one simple thing is pretty original; I can’t off the top of my head think of another action movie with a formidable brother and sister fighting team. It’s always the brother rescuing the kidnapped sister or killing the guys who killed the sister.

It’s a different bickering partners dynamic than you usually get. He’s the smartass, but also the nice one. She’s the hothead. When they reunite for the first time she pins his head to the wall with her knee. And of course it’s different from other male-female teams because there’s no need to address any possible romantic or sexual tension.

They also get to fight against an evil brother-sister team, not always male-male female-female, either. And they’re really good fights, both in the ring and out.

In the current ante-upping of martial arts movies, THE RAID is still one of the things different filmmakers and regions aspire to. For example, I’ve seen BUY BUST called a “filipino RAID” and JAILBREAK a “Cambodian RAID,” in which case it’s fair to say WIRA is a Malaysian RAID. It’s not a similar, bottled-in premise, but there’s an unmistakable influence in the fast, relentless battles, quickly, brutally hitting and kicking and machete-chopping through waves of attackers, sometimes in hallways.

Or maybe we can’t even call it an influence, because Mad Dog himself, Yayan Ruhian, is credited as pangarah aksi lasak – “extreme action director,” according to Google translate. He also appears in the movie, not just in a cameo, but the perfect-for-him role of Raja’s right hand man Ifrit. When I saw THE RAID, a hyped up stranger sitting next to me turned to me and said “I can’t wait to see him [Rama] fight the little guy [Mad Dog]!” One of Raja’s young henchmen fulfills the role of my friend there: “What if one day Hassan meets Ifrit in the ring? Who do you think would win?” he asks a co-worker who knows them both. “It’s the battle between a legendary fighter and Mr. Raja’s mysterious chief of security. Who would win?” And like the guy in the theater he excitedly punches the air as he imagines it.

Hassan’s first fight is a long take in a warehouse, down stairs and across a cat walk, with most of his energy spent dodging and blocking swings and letting his attackers wear themselves out. He seems unimpressed, a little amused, and I like that the most painful hit is self-inflicted, when he intentionally drops down onto a pile of bags of fertilizer or something. He lays there for a second and grunts when he gets up.

There’s a really good variety of action because there’s a big fight in the ring and then on their walk home they already get jumped and end up in a huge fight in a moving bus. That scene is reminiscent of THE VILLAINESS – we can see at times that it’s not an actual moving bus, but some sort of green screen situation allowing for amazing camera moves going in and out and around the vehicle. But also it’s really well choreographed and performed brutality inside this confined space.

I love when a movie acknowledges that guns exist but has the characters deliberately not use them. In this fight Hassan takes a hand gun from somebody, pulls the clip out, fires the bullet in the chamber into the air, then throws the gun as a projectile.

I’m also a sucker for an action hero who sincerely believes in redemption. Not just for himself, but also for the young henchman who he embarrasses by asking about his family. He makes it clear he knows the guy’s mom and guilts him about his sister who died of an overdose. Later, while acknowledging that they’re about to fight, he apologizes for having brought up the sister. Then, after winning the fight, he apologizes again, to make it clear he was being sincere. And he gets through.

There’s also some themes of class solidarity and some good family melodrama (I like the introduction of his dad’s machete that holds sentimental value), enough humanity to act as fuel for the intense, ambitious action sequences that take up most of the movie.

Of course that Legendary Fighter vs. Mr. Raja’s Mysterious Chief of Security fight does take place, and man does it deliver. If there’s any complaint about it it’s that it’s too much like the all-time-classic Mad Dog fight in THE RAID – it has a similar sense of the villain being excited by the challenge. He puts weapons down at the beginning. After much fighting, he gives Hassan two knives which he says are sharper than the machete he’s using. Then he puts down one of his own knives. Handicapping.

It also recaptures THE RAID’s feeling of complete exhaustion between the fighters. The bulk of it is between the two men, after Zain has been left unconscious or dead. They completely wear each other out, and it builds to one those joyously over-the-top moments where the two power up a real fight-ender of a punch at the same time and nail each other simultaneously. RESERVOIR DOGS knockout, almost. But Ifrit remains barely aware and struggles to get to his feet. ** FAVORITE PART SPOILER ** As he tentatively wobbles across the room, Ifrit hears the gasp of Zain sputtering back to consciousness. And he freezes, like, You’ve got to be fucking kidding me. More?

Like WOLF WARRIOR II, WIRA has a mid-credits epilogue that seems to set up another chapter, comic book movie style. Zain joins the military to learn discipline like her brother did – it’s a Muslim country, so she has to cover her cool short hair with the Boz-cut stripes in the side – and learns to fly jets. She’s in a cafeteria exchanging cold looks with some other soldiers, with dramatic reveals of the names on their uniforms. At first I thought it was a cliffhanger I didn’t understand, but IMDb research indicates these characters might be the heroes of PASKAL: THE MOVIE, a 2018 smash hit by the same director, Adrian Teh. PASKAL is based on a true story about an elite unit of the Royal Malaysian Navy, and also has Azreen in it, but not playing Hassan. I hope this is just a cute little crossover, because if we see Zain again who wants it to be in a war movie? Not I. In the ring and on the streets (or buses), not in the skies.

If you have access to this one it’s a must-see in my opinion.

Adrian Teh Fify Azmi Hairul Azreen Yayan Ruhian
This entry was posted on Wednesday, August 5th, 2020 at 10:47 am and is filed under Action, Martial Arts, Reviews. You can follow any responses to this entry through the RSS 2.0 feed. You can skip to the end and leave a response. Pinging is currently not allowed.