FREEBIE AND THE BEAN is an early example of the buddy cop movie, but it seems like it was made after that was a long-established genre, and by a director who got bored and tried to subvert it at every possible turn. The director in question is Richard Rush in 1974, before he did THE STUNT MAN. The story seems fairly by-the-numbers after we’ve seen so many other movies of this type, but that doesn’t prevent the whole thing from seeming really fuckin odd, sometimes in ways that it’s hard to put your finger on.

The first shot in THE STUNT MAN was a dog licking its own balls, this one starts on a cat snooping around a curb where a fat movie-mobster puts his garbage cans. A car pulls up and two men get out and steal the garbage. One can they put in the back seat of the car, the other they pour into their trunk.

It’s the titular buddy cop team, and they’re looking for evidence to put this guy away. Freebie is James Caan, a tough cop willing to go a little to the dark side because he’s angry about working so hard for so little money. The Bean is Alan Arkin, who whines even more than Freebie does and is having marital troubles and what not. Together they’re a team of shat-upon detectives. They get no respect. 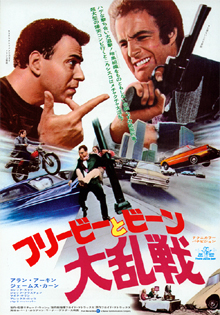 But to be fair their boss has every reason to hate them – in fact should honestly hate them way more than he does. He gets mad when they total three police cars in two days, but he should probly’ve fired them a long time ago for the tremendous amount of damage they’ve done both in physical property and human life. They are some really, really shitty cops, although arguably pretty good drivers considering the extreme circumstances they drive under.

There are some crazy chases in the movie, with a major emphasis on cars smashing into other cars or knocking over things in or around their path. In one scene they launch their car off an overpass into the side of an apartment building, then calmly climb out as an elderly couple lay in bed watching them like they’re TV. Most of the comedy in the movie is a little too broad and wacky for my tastes, partly because of the whimsical score by Dominic Frontiere. But I like how Freebie calls for a tow truck and takes a moment to check the number on the front door so he can tell them it’s on the third floor.

Another good stunt sequence is a big motorcycle chase where Freebie drives over a bunch of gridlocked cars, through a crowded park, etc. There’s alot of attention to detail and timing, like the excellent shot from inside their car where they pull up to a hotel just as a guy is thrown through the lobby window. Or when they get in a smash-up battle with another vehicle and their car backs up and makes tracks across its own hood.

What makes the movie unique is the way Rush seems to throw in some weird detail or staging for practically every scene. For example there’s one where Freebie and Bean are in the chief’s office having a word with him. We’ve seen that scene a hundred million times in movies and TV shows so instead of having them just sitting there like normal people Rush for some reason has them leaning in uncomfortably close, invading the chief’s private space. And the chief is shaving the whole time.

Sometimes it’s subtler than that, there’ll be something weird in the background, like a shot where they’re talking and way off in the distance there’s one woman standing there looking at them. Or there’s a fight and shootout that happens in a dentist’s office, with one of them laying on top of a guy that was in the chair having a procedure done. Freebie and the Bean are never gonna just have a shootout in a warehouse or shipyard like your standard issue movie cops. With them it’s gonna be something strange like a fist fight with a transvestite in a women’s bathroom.

(There’s also a great scene where they stop and adjust their clothing and weaponry and talk over their plan before rushing a guy in a men’s room.)

There’s a chase through a restaurant and into the kitchen, similar to the one in THE MAN FROM HONG KONG. In one part they come smashing through a window and knock over some old ladies at a table. If you watch closely there’s a grey-haired lady in a fur coat with her back to the camera. When she’s knocked over her wig falls off and it’s clearly a man underneath. Because of the strangeness of the movie I honestly don’t know whether it was a screwup that they left in there or if it was an intentional gag that a man was in drag at the restaurant but got outed by this chase. Either one would fit with the movie.

I didn’t get this until just now, but the reason he’s called Freebie must be because he abuses his power as a cop to get people to give him shit he can’t afford (for example a suit coat that he and his obvious stunt double wear throughout the movie). And the reason he’s called The Bean, I think, is racism. At one point Freebie does his Bean imitation with a thick accent, I thought that was kind of weird. Later he starts calling him racial slurs, and you realize that Alan Arkin is supposed to be Mexican. Stranger still, we later meet his wife, a hot Latina played by Valerie Harper.

It didn’t occur to me when I watched BAD BOYS 2 but that movie is almost like an update of FREEBIE AND THE BEAN. Both are about two sort of shitty cops who never shut their fucking yaps and are constantly bickering at each other and it’s clearly supposed to be alot funnier than it actually is. Both buddy teams are involved in wreckless vehicular mayhem that causes massive property damage and endangers hundreds of innocent lives, played for wackiness. In fact, Freebie even shoots innocent bystanders on accident and they make a joke out of it. The scuffle in the dentist’s office leaves a woman with a bullet wound in the hip. Afterwards Freebie complains “I can’t hit nothin today,” and the Bean says “Oh, don’t feel too bad. You hit a nurse.” And she’s never mentioned again.

And like BAD BOYS 2 and other Michael Bay joints this one has alot of racist and homophobic joking around. It’s okay that he calls him a “spic” because he really loves him, you know. They also have a BAD BOYS style approach to family disputes, as Bean decides his wife is cheating with a neighbor so he threatens to kill the guy’s dogs, then angrily interrogates her. The difference though is that as he unloads every piece of evidence he has on her it turns out that there are logical explanations for everything and she actually is innocent. In BAD BOYS he’d be right and it would be to show how awesome he is – “ha ha bitch, he caught you!” – but here it turns out he’s a paranoid dipshit who owes his lady a huge apology. (Otherwise he could always replace her with Sandy Duncan.)

According to Rush on the STUNT MAN dvd, Stanley Kubrick called FREEBIE AND THE BEAN the best movie of 1974. That would mean he liked it better than THE GODFATHER PART II, CHINATOWN, THE CONVERSATION, THE TEXAS CHAIN SAW MASSACRE and even HERBIE RIDES AGAIN. I’m gonna assume he hadn’t seen MR. MAJESTYK or BLACKBELT JONES yet because it seems too riduclous that he would choose it over one of those.

Anyway I don’t agree with Mr. Kubrick on that one, but FREEBIE AND THE BEAN is definitely a distinctive movie with alot of good spectacle, worth your time in my opinion. For years it wasn’t on DVD but was finally made available a few months ago through the Warner Archive.

Alan Arkin James Caan Richard Rush Valerie Harper
This entry was posted on Monday, May 16th, 2011 at 11:03 am and is filed under Action, Crime, Reviews. You can follow any responses to this entry through the RSS 2.0 feed. You can skip to the end and leave a response. Pinging is currently not allowed.

20 Responses to “Freebie and the Bean”