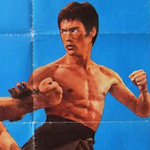 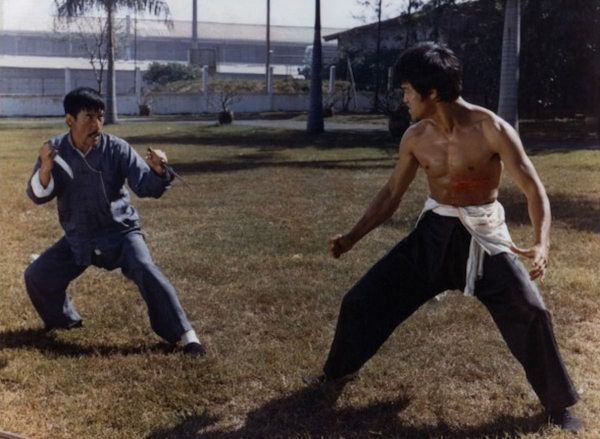 In his first starring role, Bruce plays a Chinese immigrant in Thailand who tries to stand up for the rights of his fellow workers at an ice factory. The boss is actually a drug trafficker and tries to corrupt him, but it doesn’t take. There’s a crazy scene where Lee fights a bunch of dobermans, and two where he kicks people through walls (once leaving a Looney Tunes-style body-shaped hole!), but my favorite badass maneuver is a small gesture when he’s storming the boss’s mansion. Outnumbered and surrounded in enemy territory, he shows his complete lack of concern by casually munching on a chip. (It was a great year for badass chewing – Dirty Harry also foiled a bank robbery while finishing his hot dog.)

Bruce plays Chen Zhen, a fictional character avenging the death of the real historical figure Huo Yuanjia. Taking place during Japanese control of Shanghai, it deals largely with tensions between the two nationalities, including a classic scene where Chen Zhen goes alone to a karate dojo and beats up every last person there. Convinced that the karate school poisoned his master, he camps out at his grave like a crazy person and, wearing a variety of disguises, goes after each of the conspirators. His representation as a superman standing up for his people is so important that there are two iconic scenes where he wrecks degrading anti-Chinese signs, and it ends on a freeze frame of a defiant flying kick in the face of martyrdom.

Chen Zhen was later played by Jet Li in the excellent remake Fist of Legend (1994) and by Donnie Yen in Legend of the Fist: The Return of Chen Zhen (2010).

My personal favorite Lee film is the only one he completed as director. Lee plays country boy Tang Lung, whose uncle sends him to Rome to help a family friend deal with the mafia trying to take over his restaurant. The staff don’t take him seriously (largely because he has to use the toilet a lot!) but when they see how well he beats up gangsters they agree to his plan to teach them kung fu.

Eventually it comes to one of the greatest one-on-one fights in cinema history, against the American karate champion Colt, played by Lee’s student Chuck Norris in his first credited movie appearance. He’s a cocky hired thug with barely any dialogue, and during this duel in the Colosseum he falls victim to a dismissive gesture for the ages when Tang Lung tears out a clump of his thick chest hair and blows it like dandelion seeds. It’s an incredibly detailed chess match of a fight with Tang Lung using the set moves of traditional kung fu until he decides he needs a different approach, and begins to dismantle Colt one body part at a time. I love the non-verbal communication like the “don’t try it” head shake he gives right before the conclusion.

Lee was seriously striving for excellence as a director – unusual for Hong Kong filmmakers of the time, he insisted on seeing the dailies in color, and worked closely with composer Joseph Koo – even playing some percussion! – rather than using library music. Because he disliked the way westerners were dubbed in most Hong Kong movies, he did some of those voices himself. And his script for the climactic duel was reportedly 20 pages long, precisely describing each shot and move. Therefore I believe Way of the Dragon is the purest expression of Bruce Lee on film. 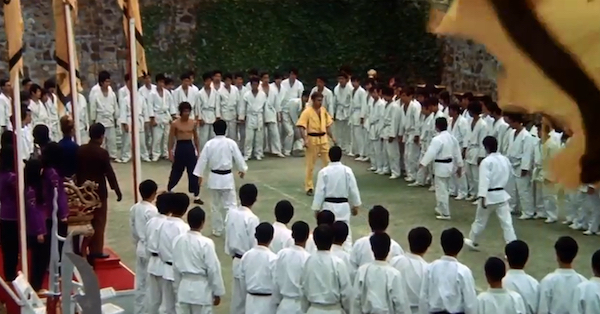 The one that made Lee a posthumous international superstar is the most American of them – it’s in English, he beats up entire armies like an unarmed Rambo, he shares his screen time with John Saxon and Jim Kelly. But it’s also Lee at his physical peak, clearly knowing the spotlight is on him, primed and ready to send it crying home to mama. Seemingly inspired by James Bond as much as martial arts movies, it nevertheless cemented the timeless format of the underground fight tournament movie, and boasts a particularly colorful villain (with interchangeable weaponized prosthetic hands like an action figure) and a funky score by Lalo Schifrin. 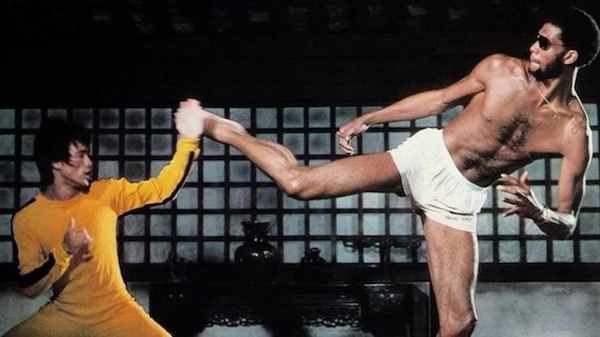 This posthumous production is the one that I’m only counting as half a film. Though it contains one of the best and most iconic fights of Lee’s career – the yellow-and-black jump-suited duel with Kareem Abdul Jabbar – it’s also a tasteless exploitation of his death and a bastardization of the movie he was trying to make. Lee’s story about a retired champion forced by gangsters to battle martial arts masters through five levels of a pagoda was abandoned in favor of one about a movie star who fakes his death after gangsters attempt to assassinate him on set. Footage of Lee’s real fans mourning his real death is crassly used as part of the fictional story.

For a truer Game of Death experience I recommend the documentary Bruce Lee: A Warrior’s Journey, released separately as well as in the extras of some editions of Enter the Dragon. It tells the story of Lee’s unfinished passion project and uses his notes and storyboards to re-edit all the completed footage (the climax of the movie) as originally intended.* 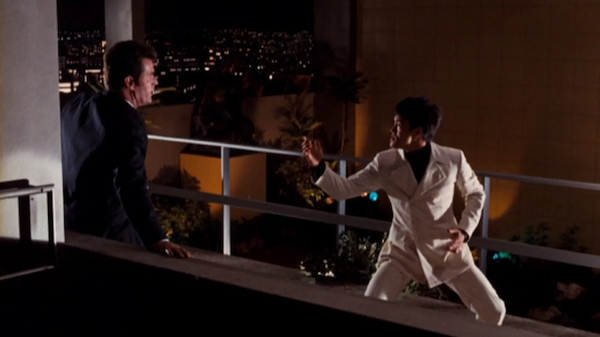 Those who hated seeing the fictional Bruce Lee taken down by Brad Pitt in Once Upon a Time… In Hollywood might not want to see the real Lee playing a character who loses a fight to James Garner. But (much like Norris in Way of the Dragon) Lee makes a big impression in a few scenes as a henchman in this hippie-era take on the works of Raymond Chandler. 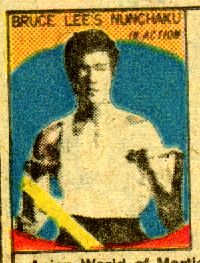 It’s a small filmography to represent such a huge life. Born in San Francisco but raised in Kowloon, Lee came back to the States as a teenager. In Seattle he studied acting and philosophy, fell in love, started a family and a kung fu school. In the Bay Area he continued his teaching and both promoted and challenged Chinese traditions. In Hollywood he made a mark as an actor, trainer and guru. But racism blocked him from the leading man and creator roles he knew he could excel at, and he had to return to the Hong Kong film industry to get that opportunity. Then Hollywood listened, and Enter the Dragon made him a global superstar… but only after his death.

Though Lee’s excellence inspired and created opportunities for many, it’s only very recently that we’re starting to see more than a handful of mainstream American movies with Asian leads. So in addition to all those other things I listed in the first paragraph, Bruce Lee is a quintessential story of America’s promise and unending struggle for improvement.

If you’re going through the box set, I also have more in-depth reviews of all of them:

THE WAY OF THE DRAGON

GAME OF DEATH II (not mentioned in the column, but included in the box set)

MARLOWE (not included in the box set, but mentioned in the column)

Bruce Bruce Lee Profiles in Badass
This entry was posted on Tuesday, July 14th, 2020 at 11:50 am and is filed under Blog Post (short for weblog). You can follow any responses to this entry through the RSS 2.0 feed. You can skip to the end and leave a response. Pinging is currently not allowed.