Actually that’s complete bullshit, I just made that up. That woulda been cool though. Anyway anything you need to know about why Bruce Lee is such an icon is in this movie: the arrogant persona (his character is actually kind of a dick), the perfect physique, the powerful moves, the cool nunchucks, the occasional philosophy, the greatest theme song of all time (thank you Lalo Schifrin). But everybody knows that. I’m not telling you anything you don’t know if I talk about that. So let’s give some credit to the rest of the movie. For example, co-star John Saxon. 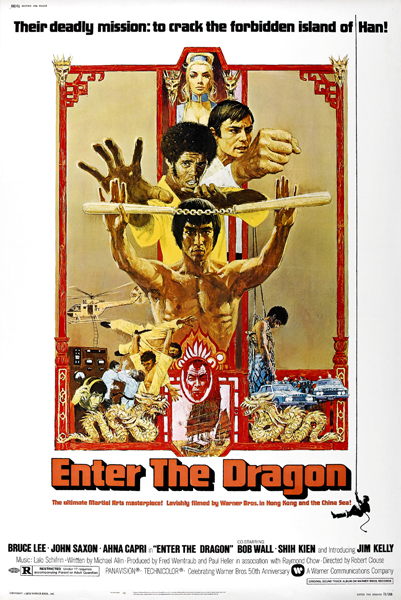 Now right now I gotta apologize to John Saxon. More than once in other reviews I used him as an example of a certain type of action direction. I said that in this movie, they pulled the camera back to show everything Bruce was doing, and pushed it in to hide what John was not doing. Maybe I imagined it, maybe it just looks that way on the pan and scan tv version. But seeing the widescreen version I see that John Saxon (or stunt double) does do some good kicks and punches and crap. What I said was true to a certain extent but not as bad as I remembered it. And most of all I should acknowledge that Mr. Saxon did fine and apparently has a blackbelt in karate even though he was hired for his acting, which he has a brown belt in.

Even not counting Bruce there’s a real good cast. Sammo Hung is in there (fighting Bruce in the opening scene and doing amazing fat man handsprings), Bolo “Chinese Hercules” Yeung is in there as the imaginatively named henchman character Bolo, and of course you got Jim “Blackbelt Jones” Kelly and John Saxon as Bruce’s fellow good guy competitors. Jim and John both get flashbacks to explain why they’re on this island, and that makes me root for them. John owes a bunch of money to some mafia types, he’s only got 63 bucks in the bank and he needs to win the competition to get the money. Jim was about to go anyway but some fuckin pigs started harassing him, so he beat the shit out of them and stole their car. So it’s probaly best he’s on an island somewhere for a while. (Although he ends up staying there longer than you would wish. Spoiler.)

Bruce tops them all though because he has a landmark three motives for this movie. I can’t think of another kung fu movie that has to give three different motives. #1, he is sent on a mission to restore the honor of the Shaolin Temple, because this former shaolin monk Han is going around being an asshole, giving the Temple a bad name. #2, some british dudes want to send him there on a secret agent type mission to prove that Han is responsible for all these girls who keep turning up dead. It seems like Bruce lucked out getting sent on a secret agent mission to do something he was about to do anyway. And then he finds out #3, Han’s henchmen killed his sister. Or at least cornered her so she killed herself.

At the beginning we see that Bruce is from Shaolin, which I figure means he’s a monk. But he doesn’t seem like a monk because he wears a suit and tie sometimes, he goes on secret agent missions, he suggests killing the villain with a gun, and he even gambles. (It’s cool gambling though, he wins a hundred bucks on a praying mantis fight.) In comparison to Han though, he’s pretty straight laced. That fucker is no monk. He has a self sufficient island fortress with its own harem, heroin production plant, grape-feeding, and more. He not only wears a suit like Bruce does, he also has a collection of metal prosthetic hands. Some are like regular hands but one of them has fur on it and another one is like a bird talon. And one like Wolverine from the x-man movies. I figure if he was a monk he wouldn’t even get one prosthetic hand because you’re supposed to be humble and not own stuff, are you? But definitely not a variety of styles.

The writer of the movie (some gwilo named Michael Allin who later wrote TRUCK TURNER) admits he didn’t know shit about martial arts or kung fu movies, but that helps I think because it’s weird seeing a kung fu movie that thinks it’s supposed to be a James Bond or a Flint movie. You got this crazy island and a weird villain (“straight out of a comic book” says Jim Kelly) and a bunch of deadly killer babes and a gimmicky end scene. Bruce sneaks around a secret fortress at night, but he’s so good at it that he gets bored and yawns. This movie also takes the one-man-against-many cliche to the highest possible level. There is literally dozens of dudes swarming down the hallway toward Bruce and for him dispatching them is about as hard as swatting a bunch of ping pong balls with a tennis racket.

I mentioned Flint a minute ago and that reminds me, James Coburn was one of Bruce Lee’s celebrity students. He tried to help Bruce develop american projects like the one that became Kung Fu and the one that became CIRCLE OF IRON. There’s a documentary on the ENTER THE DRAGON dvd that has footage from Bruce’s funeral here in Seattle. And James Coburn and Steve McQueen were two of the pallbearers. Can you imagine that? James Coburn and Steven McQueen were both learning kung fu from this guy. Of course it’s a real bummer he had such a young death by misadventure but especially if you figure he coulda made a kung fu movie with him, Coburn and Steve McfuckingQueen. The Great Escape 2, maybe.

One of these days I’m gonna do a thorough study of the works of Robert Clouse. This guy directed all across the spectrum of martial arts because he did everything from this to BLACKBELT JONES to GYMKATA and CHINA O’BRIEN. Also THE BIG BRAWL with Jackie Chan which alot of people say is bad but I liked it years ago. Partly due to Lalo Schifrin’s funky theme song though.

In the end though I gotta wonder, what the fuck happened to John Saxon’s character, Roper? He gives Bruce a thumbs up but here he is with no tournament and no money. Did he get killed when he came back? Did he just stay on the island? Maybe he stole some of Han’s artifacts, sold them on ’70s ebay, and paid the guys back. I don’t know but I hope some day they make a sequel to explain it. Dear America, we plan to make a sequel to Enter the Dragon, but since Bruce Lee is dead it will be only about John Saxon’s character. Thank you for your understanding. It is mainly for Vern, he requested this. Your friend, international co-production. I’m sure that would go over well.

Bolo Yeung Bruce Lee international co-productions Jim Kelly John Saxon Robert Clouse Sammo Hung
This entry was posted on Friday, June 24th, 2005 at 12:15 pm and is filed under Martial Arts, Reviews. You can follow any responses to this entry through the RSS 2.0 feed. You can skip to the end and leave a response. Pinging is currently not allowed.

49 Responses to “Enter the Dragon”