The Big Boss (aka Fists of Fury)

THE BIG BOSS would be a good one to watch on Labor Day, because it’s a scathing indictment of corruption within the Chinese ice industry. About time somebody blew the lid off that shit. Cheng (Bruce M.F. Lee) gets a job loading big blocks of ice, which the workers don’t realize have bags of coke inside (even though they saw one of the bags when one of the blocks broke open. But this was a more naive time). The foremen are extra-abusive, slapping people around and shit. To be frankly honest I think these particular workers are a bunch of whiners who don’t seem to work very hard, but they’re right to stand up for their rights when a co-worker gets hit or goes missing.

Unfortunately Cheng can’t really do anything because you know how it is when you wear one of those medallions that reminds you you promised your late mother never to fight again. In one frustrating scene Cheng just stands around watching while a whole bunch of union-smasher types beat the hell out of his colleagues. They all think he’s an asshole for not helping, but luckily some dumb sucker accidentally tears off his medallion, and Cheng is unleashed. There’s a real good overhead shot showing him kicking out a circle of thugs that surround him. One guy he kicks so fast I had to rewind it to make sure the guy didn’t just keel over from unrelated health issues. 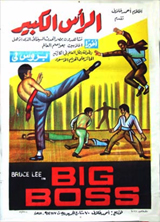 Cheng proves to be such a threat that management gives in and makes him foreman. He tries to change things from the inside, but this movie recognizes the universal truth that the little guy can complain and complain about the bosses and then turn just like them as soon as he gets the chance. The manager invites Cheng to dinner, gets him drunk, gets him laid. His friends are waiting for him to come back with news  about the search for their missing buddies, but nobody sees him until the next morning when the girl he likes spots him stumbling out of a whorehouse. Whoops. So much for being the cool foreman that everybody likes.

Still, he tries to get to the bottom of it. When he goes to the Big Boss’s mansion there’s a really weird fight with the guard dogs, a bunch of dobermans (dobermen?). Cheng keeps super-jumping over these dogs, and the dogs keep jumping at him. But I don’t know man, it sure looks alot like somebody throwing dogs in the air. Not trying to make any accusations, but I believe there is a possibility of dogthrowing in this production. Anyway, then he comes in and the boss welcomes him as a guest. No “Sorry about my dogs attacking you” or “jesus, why’d you kick my dogs?” or anything. Like it never happened.

You might find this surprising to hear, but the fights are real good. No nunchakas yet, just fists (of fury), feet (of outrage) and knives (of profound disappointment). It’s all pretty down to earth except that he takes on 10-15 guys at a time and does those jumps (he leaps a tall fence without even a running start). One of my favorite moves is when he kicks a guy through a wall and uses the hole it creates to exit the building. For some reason his opponents use the door, even though it would be more direct to just follow him. I think they don’t want to lend credibility to his kicks by using his hole as a portal.

Oh man, there’s another part where he kicks a guy through a wall and the hole it makes is human-shaped, like in a cartoon. You may be thinking wait a minute Vern, why did you say it was “all pretty down to earth” then? Well, because these are all things Bruce could and did do all the time in real life. He was Bruce Lee, remember.

Definitely the most classic badass moment in the movie is when he invades The Big Boss’s property for the final showdown. While all the bodyguards surround him and get ready to stab him he stands casually munching on some chips. And after he takes out the first couple guys he eats another one. This was the same year as DIRTY HARRY, so I think it’s a coincidence, it’s not one copying the other. It was the times we were livin in, man. Future-iconic-action-hero-munches-casually-on-food-while-doing-badass-shit was just in the air in 1971. In fact, I think the whole planet was vibrating with badass because how else did DIRTY HARRY, THE BIG BOSS, GET CARTER, THE FRENCH CONNECTION, BILLY JACK, DUEL, SWEET SWEETBACK’S BADASSSSS SONG, THEY CALL ME TRINITY, VANISHING POINT and SHAFT all come out in the same year?

(geez, do they ever make that many good movies in a year anymore? There was also A CLOCKWORK ORANGE, TWO-LANE BLACKTOP, WILLY WONKA, THX 1138, TWITCH OF THE DEATH NERVE, STRAW DOGS, OMEGA MAN, PLAY MISTY FOR ME, THE BIG DOLL HOUSE, MCCABE & MRS. MILLER, THE LAST PICTURE SHOW, KLUTE, HAROLD AND MAUDE, DIAMONDS ARE FOREVER, THE ABOMINABLE DR. PHIBES… so many movies people still watch all the time. I’m not sure 2005 even has that many movies that people still watch.)

The Big Boss is a real dick. He pretends to care about the workers when actually he’s having some of them taken out and frozen in ice blocks, which in my opinion is not a good business practice and should be against O.S.H.A. rules. He tells the workers to be frugal and save their money, but meanwhile he’s got girls feeding him and massaging his back during meetings, he lives in this big mansion, and those dogs that jump so high it looks exactly like somebody picked them up and threw them as high as they could into the air can’t come cheap. His “Just how evil is he moment?” is when he’s smoking and he burns a girl with the ashes and then he blames her and calls her an idiot.

I was really surprised that this guy knew how to fight. He seems like the type of villain that should be filing his nails while henchmen do the dirty work. But he gives Cheng a good duel. Maybe he moved up the totem pole the same way Cheng did, by beating up 10 or 15 guys at a time. 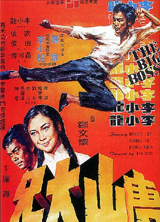 THE BIG BOSS is thought of as the first Bruce Lee movie, because it’s his first adult starring vehicle. But actually he had been in all kinds of movies as a kid. In fact his Chinese name “Lee Jun Fan” translates literally to “Chinese Kurt Russell.” Still, this is a cruder movie than his other ones, he was just figuring out how to completely reinvent the martial arts movie and turn the whole thing on its head and change the world forever, etc.

Some of you rascals have already been tearing THE BIG BOSS a new one in the comments for my previous review, pre-rebutting this review while I was still writing it. Well I disagree. It may be sloppy in some ways and get some unintentional laughs, but it’s a template for the kind of formula martial arts movies I enjoy, movies that take place in the modern world, and have a regular guy who happens to be good at martial arts who is pushed into a corner where he must fight a bunch of mean bastards and make things right. It’s that type of movie but with a much more impressive physical specimen than usual. Not to be controversial but in my opinion Bruce Lee was really good at kung fu and shit. It’s always enjoyable to watch him.

And I like the sentiments behind it. While certain more polished Lee vehicles (I’m looking at you, FIST OF FURY) are based on bullshit nationalistic themes, this one has the universally admirable working-man-vs.-asshole-boss story at its heart. You could watch a movie about coal miners going on strike, or one about Bruce Lee kicking a rich guy’s dog in the mouth. Both are good but I prefer the second one. The kicking the dog one.

Bruce Bruce Lee
This entry was posted on Friday, April 16th, 2010 at 12:57 am and is filed under Martial Arts, Reviews. You can follow any responses to this entry through the RSS 2.0 feed. You can skip to the end and leave a response. Pinging is currently not allowed.

79 Responses to “The Big Boss (aka Fists of Fury)”