It actually has alot in common with ATOMIC BLONDE. A beautiful bisexual spy (well, assassin in this case) double and triple crosses her way through end-of-the-Cold-War European intrigue with a twisty plot and a couple of long, impressive fight sequences. Charlize and her action and David Leitch’s intoxicating colors and music are more my speed, but ANNA has the advantage of being real complicated without being hard to follow. It’s a satisfying tale.

Sasha Luss (the Russian model who played the blue-skinned mocap Princess Lihö-Minaa in Besson’s VALERIAN AND THE CITY OF A THOUSAND PLANETS) stars as Anna, a Russian student who gets recruited for a modeling gig and flown out to Paris, where she’s treated like a superstar. We watch her adapting to this new world, learning the job, getting a delightful girlfriend (Lera Abova) and trying to establish herself. It spends just enough time on that to really seem like a movie about modeling. And as we wonder when it will be revealed to her that this modeling agency is a front, suddenly she kills a guy and it skips back to show us that no, she’s the front – she was already working for the KGB and had to prove herself by becoming a model to start a relationship with this guy and record him admitting to selling weapons to rebels.

Now we see her adapting to that earlier gig, trying to win over skeptical boss Olga, who I didn’t recognize as Helen Mirren (SHADOWBOXER) until she took her glasses off. (Which is making me reconsider my opinions about Clark Kent’s ability to not be recognized as Superman.) Her FAST & FURIOUS son Luke Evans (NO ONE LIVES) plays Alex, who finds Anna living with an abusive junkie (Alexander Petrov), convinces her to work for him, and soon is fucking her. Anna is an aggressively sexual character, but always in a pro-active way – there are multiple scenes of her and another person suddenly giving in to temptation and frantically rolling around and tearing their clothes off. 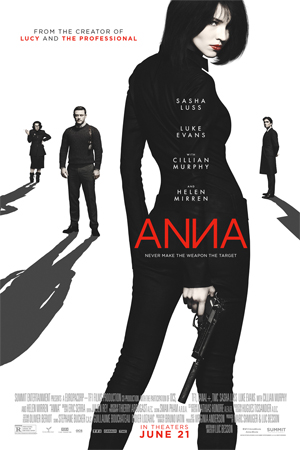 As I get older, and Besson gets older, and I become more aware of him marrying the 16 year old Diva Plavalaguna when he was in his 30s, it’s harder for me to look at Luss here without thinking how young she looks (at 27 she’s much older than I thought) and how gross it is if Besson’s lens is looking at her the way I suspect it is. And yet she’s a good character, projecting a strength far beyond just knowing how to elegantly aim a silenced pistol or flip around with guns, knives and dinner plates and kill like 15 or 20 mobsters in a restaurant. She projects an intelligence bright enough to shine through the blinding light of her surface. That’s something that didn’t come across in the skinny-super-model-kills-some-guys oriented trailer.

One notable scene is when Alex first approaches her and tries to convince her she has no choice but to become an agent. She knows she’s seen too much and that if she says no he’ll have to kill her. So she says, “I reject your offer,” and slashes her wrist. He has to give her a better argument to get her to cup the other hand over the wound. It’s fucked up but it’s a great way to establish her insistence on being in charge of her own destiny. The deal is to work for five years and then be a free woman. But she quickly figures out the promise was only made on the assumption she’d never survive that long. But she’ll figure something out.

She also meets a CIA handler (Cillian Murphy, RED EYE) and becomes a double agent. At least it seems like it, but things are complicated. It’s a little bit like WILD THINGS in that it keeps skipping back to events it skipped over that show us things are entirely different than they first seemed. I like when it returns to previous events that seemed casual at the time and now we know they’re set up and there’s agency dudes everywhere with headsets and binoculars watching and listening.

Besson’s got his usual skilled team around him – cinematographer Thierry Arbogast, composer Eric Serra, editor Julien Rey. Besson is the sole writer this time. The second unit director is Olivier Megaton (director of TRANSPORTER 3, COLOMBIANA, TAKEN 2 and TAKEN 3), with stunt and fight coordinator Alain Figlarz (SHEITAN, BABYLON A.D., LUCY). Obviously it’s not as impressive as VALERIAN, but it’s as well made as you’d expect from them.

I don’t know. People are complicated. They can be abusive to real women even though they’re worshipful of fictional ones. Besson should be held accountable for whatever he’s done, and I can’t blame anyone for wanting to dismiss female characters, no matter how empowering, for being created by a guy like that, or for doing double duty as fantasy objects for sleazy dudes. But I believe the heroines of his earlier, more popular movies wouldn’t have caught on the way they did if there wasn’t something more to them than fetish. The actors who play them bring a life to them that has value beyond the conception of the director. So I’m okay with ANNA. I hope somebody as good at filmmaking but better at humanity will see what Luss is capable of as an actress.

assassins Cillian Murphy Helen Mirren KGB Luc Besson Luke Evans models Olivier Megaton Sasha Luss
This entry was posted on Tuesday, November 5th, 2019 at 8:54 am and is filed under Action, Reviews, Thriller. You can follow any responses to this entry through the RSS 2.0 feed. You can skip to the end and leave a response. Pinging is currently not allowed.