The two killers have a strong attachment, they take care of each other, and they are lovers. And, uh, they’re played by Cuba Gooding, Jr. and Helen Mirren. Hahem. 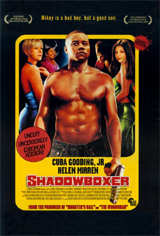 (See, you’re thinking “actually this sounds pretty generic” until I got to the part where the guy from BOAT TRIP is banging THE QUEEN.)

MIRREN: I’m so embarrassed. I was thinking about God today.
CUBA: Of course  you were. You’re dying, Rose.
MIRREN: (something something)
CUBA: It’s just cancer, Rose. It’s just cancer. (pause) Will you bathe me?

(CUT TO Helen Mirren sponging off Cuba Gooding in the bath tub.)

See, that’s the kind of party this is. At first it seems like Gooding and Mirren are lovers, until you find out she dated his dad and has taken care of him since he was 7. So maybe they’re just affectionate, I got the wrong idea. But then there’s a scene where they listen to Nas and striptease for each other (this is the first movie I’ve seen that has Academy Award winner Helen Mirren swinging on a stripper pole) and yep, turns out they’re lovers. More than once during this movie it turns out that they are lovers.

Stephen Dorff, the motherfucker that’s always tryin to ice skate uphill, plays the crime boss. I’m not even sure what line he’s in, just that he’s constantly having everybody killed for crossing him. We first meet him sticking a pool ball in a guy’s mouth and half a pool stick up the ass. The guy claimed to have fucked the boss’s wife, which is why he wanted her killed. Just in case this guy’s not lying. Just to be safe.

That’s how he is, he just kills everybody. The witnesses in the pool hall: killed. The people talking in the hallway while he’s fucking: killed. The guys he pays to guard his wife when he’s paying other guys to kill his wife: killed. Several other characters played by celebrities: killed. This is not a safe movie to be in.

One of the big motifs in the movie is ass. Gooding and Dorff both show their ass during sex scenes. Another guy bends over and presents his ass for Cuba-in-drag-pretending-to-be-a-prostitute. Three different heterosexual sex scenes are from behind. Ferlito fingers herself while staring at Gooding’s ass while he’s taking a shower. I guess this makes the movie stand out, it’s not a bad thing. It just loves asses. That and older ladies.

You know, ever since AMERICAN PIE you always hear about “MILFs,” which seems to be any naked girl above the age of 26. And now they’re always talking about “cougars,” which for some reason is a positive term for older ladies who partake in the younger men. Maybe this movie was meant to tap into the zeitgeist on that one. Cuba and Helen aren’t the only mismatched couple either, there’s also the sleazy doctor and nurse pair of Joseph Gordon-Levitt and Mo’Nique. You know what Mo’Nique’s character is named? Precious. Isn’t that a damn shame if this is the same Precious? Poor girl grew up to look just like her horrible mother. And now she’s stealing pills. Plus she walks in on her boyfriend going down on a patient, and he doesn’t even try “I slipped” or any of the obvious excuses.

It does kind of seem like the same world as PRECIOUS. The apartment where the young version of Cuba’s character Mikey was abused could be in the same building where  Precious was – same dingy walls and colorful lights. It has a similar disorienting feel because the violence is off screen (Daniels says on the commentary that he’s too disturbed to shoot men committing violence against women because his dad was abusive).

And like PRECIOUS it’s about this cycle. Mikey’s dad abused him, killed his mother. It seems like the movie might think Mikey and Rose’s relationship is romantic, but I think most of us will agree it’s abusive too. You can’t fuck somebody you’ve raised from the age of 7, come on lady. You know this rule. This is not an obscure one I’m pulling out of a hat. Mikey is basically turned into a killing robot. He does whatever Rose tells him, unquestioningly. The few times his emotions get to him he curls up like a baby. He only seems like an adult when he’s killing or exercising.

That’s one thing I should mention: whenever they need a transition they cut to him training on a punching bag. You get it? He’s the shadowboxer! You thought it would be some kind of corny metaphor, but it’s only a metaphor for him practicing boxing. He’s not a fighter or anything. But at the very end he takes on the bad guys using the power of punching. When people need punched, there’s only one man for the job: SHADOWBOXER.

In all fairness I must say that Gooding is good in this. He doesn’t talk much (IMDb says 37 lines total) and does no mugging. He’s 100% of the reason I never considered watching the movie before – a new DTV Cuba Gooding Jr. thriller seems to come out every month (LINEWATCH, THE DEVIL’S TOMB, HARDWIRED, etc.). I can’t think of an Oscar winner who ever fell off as hard as him before. He even replaced Eddie Murphy in a sequel to DADDY DAY CARE! How the fuck does  a man look himself in the mirror and take that job? Did they have to hide all his mirrors to get him to sign on?

The truth is that as ridiculous as SHADOWBOXER is his performance is good and it gave me some respect for him. But that doesn’t mean I don’t laugh when he’s disguised as a transvestite hooker and he executes his john but then he notices the blood splattered on a birthday card with little kid’s handwriting saying “I love you daddy” and then it cuts to him in his dress and makeup looking sad in the rain. Or when (ENDING SPOILER) he tells his adopted son that more bad people might come after them some day and the fresh-faced little boy says “We’ll kill ’em!” and Cuba’s overwrought face of torment seems to just barely hold in a scream of “NOOOO!!! THE CYCLE IS REPEATING ITSELF! HE IS ME!” Daniels knows how to get a really good performance out of him, but then sticks him in a context where it’s hard not to laugh.

There’s a funny making-of thing on the DVD. The producer, not amused, talks about his fight with Daniels over the zebra. Everybody thought it was not worth the expense to put a real zebra in the movie, but Daniels insisted on his vision. And he’s there to personally feed it a carrot when it arrives on set. Where in this movie could there be a zebra, you ask? I wasn’t sure either. Turns out they show it in front of Dorff’s house for about 2 seconds. I missed it the first time.

(Okay, admittedly that’s kind of cool that he has a zebra.)

I think Kent was right, this was a good idea to watch this, it makes me feel like I have a better grasp of where PRECIOUS is coming from. This poor guy is stuck on his bad childhood, and it’s probly therapeutic to make these movies. It’s not exploitation. I think he’s perpetuating the cycle of abuse through movies instead of putting it on the next generation. So that’s good. But just because he went through it doesn’t mean it’s always a good thing to put on screen. I hope he’ll get to a point where he can make movies that are meaningful to him without having to rub the world’s face in horribleness every time.

The movie seems very serious, and I don’t think I was supposed to be laughing. But the craziness that makes it laughable also makes it interesting. I’ve never seen a movie quite like this. I’ll give it that. I’ll remember this one. 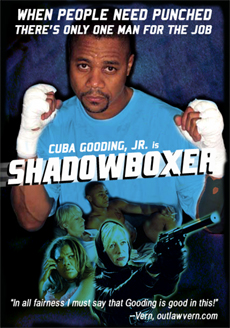 Cuba Gooding Jr. Helen Mirren Joseph Gordon-Levitt Lee Daniels Mo'Nique Stephen Dorff
This entry was posted on Thursday, February 18th, 2010 at 2:11 am and is filed under Crime, Drama, Reviews. You can follow any responses to this entry through the RSS 2.0 feed. You can skip to the end and leave a response. Pinging is currently not allowed.