7% on Rotten Tomatoes… that’s bad, right? I was kind of interested in this idea of Vin Diesel returning in a big sci-fi movie directed by the guy who did LA HAINE (you know, Kassovitz. Amelie’s boyfriend, later in MUNICH). But then there were all these stories about the studio cutting it to shreds, and then the reviews were CANNIBAL HOLOCAUST brutal, and even Kassovitz called it “pure violence and stupidity” before it was even released, pretty much signaling that he was so disappointed in the movie that he was willing to throw away any future chance at directing in Hollywood. I mean those are some pretty bad omens there in my opinion so I couldn’t work up the courage to pay money to see it in a theater. I remember even talking a buddy out of going to see it by describing how bad the buzz was. It was so bad it wasn’t even buzz, it was more of a whistle.

So I’m surprised to be sitting here telling you this, but this movie is actually kind of good. I mean, unlike Vin Diesel’s character, who does a flip on a snowmobile in one scene, the movie doesn’t stick the landing. The conclusion borders on silly, the storytelling becomes pretty muddled (possibly due in part to those studio cuts, I’m not sure) and I was not sure I really understood the point of how it ended up. But as a whole it’s so much better than I had been led to believe. Aside from some corny Riddick-style opening and closing narration Diesel is a cool action movie character inhabiting a fleshed out, believable world of chaos not too far in the future. 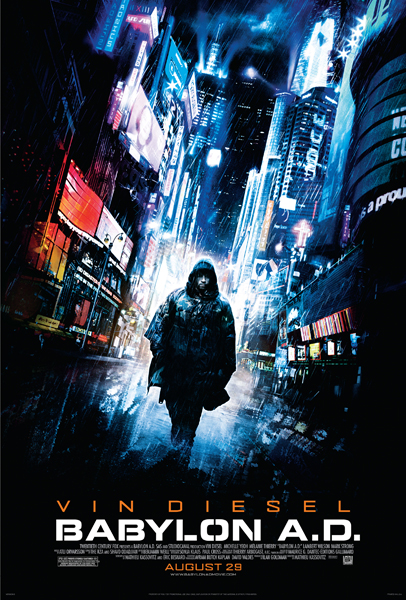 The movie opens with a pretty spectacular show-off camera move, zooming from space onto the earth, through the clouds, down to the United States, to the Northeast, to New York, to New York City, to a particular block, down onto the street, onto Vin Diesel who is kneeling on the ground, and into his face, into his eye, in which we see reflected a fiery explosion coming in his direction…

Man, I hope they got that explosion right on the first try, would’ve been a real pain in the ass to go all the way back up into space.

That was cool but the movie really got me with the more mundane scenery immediately following that. Diesel’s character Toorop wakes up, stumbles through his filthy New Serbia apartment in his boxers, swigging on bottled water as he glances out the window at refugees rioting for food. Later he goes down to beat up a dude for selling him a lemon of a handgun and to get himself some rabbit meat, which he butchers himself and fries up with some onions. When he hears someone at his door he plants his face right in his lunch – not sure if he’s protecting his food, his head, or both. (I like if it’s the head because usually in movies they act like wearing a vest protects the whole body.)

The movie is based on a book that I haven’t read. Maybe the hero is not supposed to be a Vin Diesel badass type, I’m not sure. I suspect Diesel is very protective of his persona and made sure to get it into this movie, and that that might be part of why Kassovitz was unhappy. But I think the two styles make for a good combination. When a paramilitary force comes to abduct him Toorop recognizes their leader’s voice, calls him by his first name, kills him, then pleads with the others to mind their own business since he was settling a personal score, and willingly goes with them. He just wants a moment to get his shit, including a winter jacket and the frying pan with the meat in it. Now that’s badass.

Meanwhile Kassovitz holds up his part of the bargain, giving the movie a more natural look and less bombastic feel than I expected based on those reviews. It mostly avoids that digital, artificial feel of so many modern sci-fi movies – it feels organic. And it’s not always trying to wow you like, say, a Jason Statham movie. It’s content to linger on interesting images like Toorop trying to light his cigarette while being transported in a car hanging from a helicopter’s magnet.

Toorop, a mercenary, is hired by an ugly Russian gangster who I did not recognize as Gerard Depardieu to smuggle a girl from Russia to New York. He doesn’t think it’s possible, the way borders are closed in this world, but Depardieu gets him a passport which is an implant he has to inject into his neck. In exchange he goes to a convent and picks up this girl and her adopted mother, played by Michelle Yeoh. Most of the movie is about the experience of transporting her, although things get a little weird once they get to New York and discover who exactly she is.

Along the way are some pretty inventive action setpieces. Admittedly these scenes tend to seem a little more cartoonish than the rest of the movie, but they’re alot of fun. One takes place in a dance club where people dance beneath a bloody cage match going on in a plexiglass cube suspended above. I would give the movie points just for including that concept at all, but then it finds a way to get Toorop locked inside the cage (therefore challenging a huge UFC dude to a duel) while Michelle Yeoh is below fighting DISTRICT B13’s David Belle and his parkour team. Yeoh plays a nun in this movie but does more fighting than she did as an ancient witch queen in THE MUMMY 3. I hope Vin Diesel calls up Rob Cohen and gives him some shit about that.

There’s also a pretty intense snowmobile chase, although I have to admit it seemed better after I watched the featurette about it and learned that all the flips and jumps were real and not effects. (Apparently there is some team called “Slednecks” who did them. And by the way, these guys call them “snowmobiles,” not “snow machines.” Sarah Palin was lying to us.)

I guess if you drop all the pins at the end it doesn’t count as good juggling. So you may disagree with calling this “kind of a good movie.” But the fact is that for most of the running time I found it enjoyable, and not even in the stupid sort of way I expected. It’s not CHILDREN OF MEN, but it’s above average intelligence for modern sci-fi, it’s more serious than most, but also more fun than many. It showcases Mr. Diesel’s particular talents well, it has some real nice production design (New York City of the future has a little BLADE RUNNER in it but more seems like it’s turning into Tokyo), a strong atmosphere of modern chaos, and even some of the more ludicrous FIFTH ELEMENTy ideas in the last stretch are kind of clever.

I mean, it doesn’t succeed in the end, but I don’t see how you get “terrible” out of watching this. So how do I explain the hatred toward this movie? Is it nothing but Diesel envy? Anti-Furyianism? To me BABYLON A.D. seems undeniably superior to many 2007 and 2008 action, sci-fi and adventure movies that were not reviewed with nearly as much venom, including HITMAN, ALIENS VS. PREDATOR: REQUIEM, GHOST RIDER, TRANSPORTER 3, THE MUMMY 3, 10,000 BC, and fucking DOOMSDAY. Even the god damn SPIRIT managed to eke out 15% on the Rotten Tomatoes.

But they reviewed the theatrical cut, which probaly made less sense than the ten minutes longer one on DVD. And even in this version it’s got a little bit of that SILENT HILL feel of suddenly starting to explain too much through dialogue when it’s time to wrap up. Poor Toorop, who has been pretty stoic throughout the movie, suddenly has to say the line, “You tried to corrupt mankind by creating a fake virgin birth.” Watching the extras I got confused when there was a whole featurette about the making of a chase scene I didn’t remember even seeing. Sure enough it’s included as a deleted scene. I have no idea why they cut it. When you’re almost to the end and Diesel narrates, “I thought I saved her…” I recommend going to the special features menu, watching the “Deleted Hummer sequence,” then going back to the last scene. Then the ending seems slightly less awkward.

When this came out in theaters it seemed like another nail in the coffin of Vin Diesel’s career outside of children’s movies. But actually now that I’ve seen it I think it might help him. I like him in this movie. Even if the movie’s a failure it’s nice to be able to like Vin Diesel for something he’s actually done instead of something he has the potential to do.

Michelle Yeoh Vin Diesel
This entry was posted on Tuesday, January 6th, 2009 at 5:23 pm and is filed under Reviews, Science Fiction and Space Shit. You can follow any responses to this entry through the RSS 2.0 feed. You can skip to the end and leave a response. Pinging is currently not allowed.