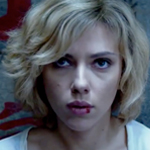 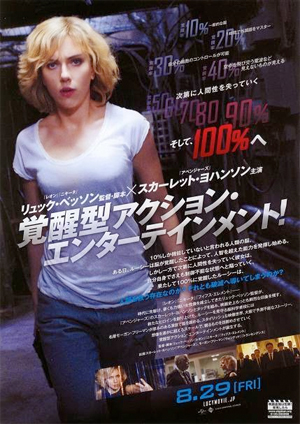 Then a run-in with one of these rapey guards that all action movie bad guys employ gets her kicked in the belly, the drug leaks into her, her mind begins to expand and she basically gets super powers. She starts to know all, remember all. She can teach herself languages. Then she can control airwaves, talk to people through their TVs. She can control her cells, morphing like Mystique. She can control others – slam them against walls or ceilings without touching them. She can bend all manners of reality. Basically, she’s Neo but in the real world instead of the Matrix and she chooses not to wear a trenchcoat because that’s not really her thing. She actually looks real good in just a white t-shirt.

Every single person I’ve seen or heard praise this has been sure to emphasize that they know it’s a dumb movie. I think probly the sole reason that disclaimer is necessary is that Besson bases the whole premise on the myth that people only use 10% of their brain capacity. We keep cutting to Professor Morgan Freeman (UNLEASHED) lecturing on the topic, and we get periodic onscreen updates of what percentage Lucy is currently at as her intelligence expands. Usually scenes like this suggest that the movie is science fictionalizing off of a current scientific theory. Not the case here, so you’re just gonna have to let that go like you maybe did with LIMITLESS‘s “you only use 20% of your brain,” if you saw that one.

Major Besson oversight: no parkour. It shoulda been once you get to 30% you are a parkour master.

Johansson, having just played an alien in UNDER THE SKIN, has her detached-super-being game up to speed. She squints curiously at the world and people around her, constantly noticing new things, but not really reacting to anything. She’s above reacting. I think my favorite scene is an emotional one, though: while forcing surgeons at gunpoint to remove the bag from her belly she calls her mom and tells her about what she can feel, what she can remember, detailed descriptions of things she experienced as a baby.

That’s almost like a Besson motif, calling your mom during an unbelievable situation. Bruce talks to his mom on the phone in THE FIFTH ELEMENT. But in that one it’s played as a joke, this one isn’t, and it’s very intense as it’s done mostly in one long closeup. She’s trying to make a very human connection just as she’s growing away from humanity.

The dangerous criminal underworld is in line with LEON or some of Besson’s work as an action producer. There’s a shootout in a fancy lobby like FIFTH ELEMENT and a rocket launcher like LEON or COLOMBIANA. But I think the most Bessonian element is how much it celebrates the beauty of Scarlett Johansson. His camera worships her like it did Milla Jovovich back when he was married to her. Back when she was his idea of “the perfect being.” He shows Johansson in a bra and in a see-through shirt, but it’s her face he’s in awe of. If science ever needs to re-create Johansson’s nose we have plenty of reference material here in long, hypnotic closeups.

What I didn’t expect was the playful use of stock footage, for example a quick cut to a mouse walking toward a trap as she first encounters the gangsters, or the sarcastic montage of exotic rituals and time lapse that represents the breadth of human achievement. It’s kind of a tongue-in-cheek pretentiousness that fits well with the all-encompassing-knowledge subject but never feels spastic like a quick-cutting son of NATURAL BORN KILLERS. I recognized some shots from SAMSARA in there, but he also has footage of a guy solving a Rubik’s cube. I wish Besson would’ve included a quick shot of Ruby Rhod in there, or The Transporter. Maybe from part 2 where he catches the car bomb on the crane, or part 1 where he slides around in the oil.

Speaking of Ruby Rhod, I saw this and HERCULES both on the opening weekend and realized they’re both by directors who did Chris Tucker movies. And both of these could stand to have Tucker in them. Maybe if it was him instead of Freeman then more people would be able to laugh off that 10% bullshit. Freeman just radiates credibility and authority and I can see why for some people it’s upsetting to see him saying this shit that will only lead to more knuckleheads around the world repeating this “fact” back and forth to impress each other. Freeman did make me laugh though with a hilariously over-friendly “Hi there!” when he calls Lucy on the phone during a dire situation.

Have you guys noticed that there are alot of movies now that start off unexpectedly in the ancient past? Examples include THE X-FILES: FIGHT THE FUTURE, PROMETHEUS, TRANSFORMERS PRESENTS AGE OF EXTINCTION, and I will not say whether or not it includes LUCY, I might’ve just brought it up apropos of nothing. You won’t really know until you see it. Anyway, I guess it’s kind of a cliche by now but I don’t give a shit, I always dig it. Definitely in this case the idea comes from 2001, and there are allusions to the monolith and shit too. Maybe a little obvious but still an odd fit for a summer b-movie, and I appreciate it.

It gets pretty strange at the end. In this age of movies that are always designed to set up franchises it’s refreshingly weird where she ends up, not something that would be easy to sequelize. But then again Besson had intended to make a sequel to THE FIFTH ELEMENT about Mr. Shadow, the evil talking asteroid, so who knows what he may or may not be up to.

I love that Scarlett Johansson has broken out in this way. Out of honesty I gotta admit that she just keeps getting hotter and I have a weakness for that. That could cloud my judgment. But she’s giving genuinely interesting performances and picking enjoyable movies. She went from shoe-horned in character in IRON MAN 2 to movie stealer in THE AVENGERS and WINTER SOLDIER, and she also keeps getting better at the posing with guns and staring and strutting menacingly and that type of shit that’s important to me. But the smaller projects she’s been involved with on the side – UNDER THE SKIN, HER, this – are a good indication that she will use her growing stardom for other greater goods.

So for God’s sake, I ask you again, give her the respect of spelling out her full name. It’s not that many syllables.

Besson has a fun approach to gender politics. Yes, he’s a horny motherfucker, but also his heroines are powerful. He’s done biopics of Joan of Arc and Aung San Suu Kyi, and also he has his action women. They’re mistreated by scumbag men, but they cannot be contained – not Nikita in a prison or an assassination agency, not Leloo in a glass box, not Lucy in 10% of her brain. She can’t be confined by reality! None of the men can handle her, not even the nice professor, whose life of research she immediately calls “rudimentary, but on the right track” and then he spends their whole relationship struggling to keep up with her. There’s a great moment where the male cop character points out that he’s useless, he has nothing to contribute to her mission. She basically tells him that his purpose is to be with her and look pretty. He’s the eye candy. The girlfriend.

That’s also a Besson thing I guess, for characters to recognize they don’t need to be in the movie anymore and opt out.

I’ll take a cue and acknowledge that I don’t need to continue this review anymore. But LUCY is a fun one, goofy crowdpleasing pulp with a healthy helping of strangeness and style. Keep on making ’em, Besson you weirdo.

Choi Min-sik Luc Besson Morgan Freeman Scarlett Johansson
This entry was posted on Thursday, July 31st, 2014 at 3:50 pm and is filed under Action, Crime, Reviews, Science Fiction and Space Shit. You can follow any responses to this entry through the RSS 2.0 feed. You can skip to the end and leave a response. Pinging is currently not allowed.