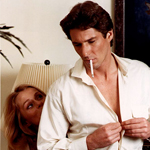 Young, slim, squinty-eyed dreamboat Richard Gere (a little after DAYS OF HEAVEN, a little before AN OFFICER AND A GENTLEMAN, way before FIRST KNIGHT) stars as Julian Kaye, L.A. gigolo. In his business there’s alot of ambiguously talking around things on account of the illegality. Lots of not stating what’s going on, or denying it – saying “you’ve heard wrong” or “you’re mistaken” when someone’s too direct or seems like trouble. So it’s interesting that he ends up suspected of a murder he didn’t do. We’re not sure at first if they really did hear wrong, really are mistaken, or if he’s just doing his usual shtick.

And the story is told with a Julian-esque indirectness. Despite a visit to his madam or manager or whatever Anne (Nina van Pallandt, THE SWORD AND THE SORCERER) in a mansion with gorgeous waterfront view and topless women sunbathing on the balcony I at times questioned whether he was even an American gigolo yet. Or was he telling the truth about being a limo driver with a side hustle translating for rich foreign women he meets in fancy hotels? Of course not, but Schrader confidently skips over much of the illegal activity, knowing we’ll catch on eventually. 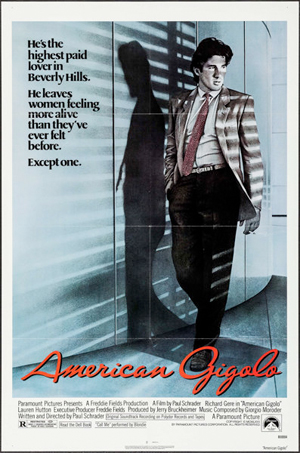 Same goes for the death. We saw Julian start a session with the deceased (Patricia Carr, receptionist, A STRANGER IS WATCHING), trying to please her despite the creepy presence of her asshole husband (Tom Stewart, The F.B.I., Cannon) directing him to be rough. But then we jumped to later, meeting with Leon (Bill Duke, who had only been in CAR WASH and some TV stuff, and still had hair), the pimp who set it up, kinda pissed off, but not talking much about what happened.

Julian has a nice place and an art collection, much of it still in boxes. Unsettled. In progress. Needs work. he sees himself as high class, great with dignified older ladies, seductively takes off his limo driver hat to get comfortable, speaks “five or six” languages, working on a sixth or seventh (Swedish). But he gets paid less than he wants, violates Anne’s trust by getting work from Leon, gigs he complains about because they involve men or “kink.” Like an actor saying they don’t want to do cheap horror movies anymore, but check out all the shit they got coming up according to IMDb.

There’s definitely a noir aspect to this movie, so of course you have to assume Michelle (Lauren Hutton, SOMEONE’S WATCHING ME!), the woman he approaches at a hotel, who starts pursuing him, who is unhappily married – to a Senator, in fact! – is gonna be some kind of femme fatale. But she turns out to be quite the opposite. (SPOILERS FOR 39 YEAR OLD MOVIE COMING UP.) When he becomes suspected of murder she has nothing to do with it. And he doesn’t ask for her help. But her husband (Brian Davies, CONVOY) finds out about Julian and assumes he’s trying some sort of blackmail scheme to force him to use his position as a senator to get him off.

Not true! When Julian eventually goes to prison he doesn’t say anything about Michelle. Not only is he not trying to use his association with her to prove his innocence, he’s trying to shield her from guilt by association with him! So he tells her not to visit him. But she, of her own volition, pays for his defense and tells the police about her relationship with him, finally providing the alibi he would not. She’s more like a… femme sauveuse? (A savior. I think the “femme” is redundant there because it’s the feminine spelling.)

Though it seems to have been filmed in ’79 (there’s a theater showing PHANTASM, and another scene that prominently features a poster and display for THE WARRIORS [very disrespectful of you to tag that, VGV])… 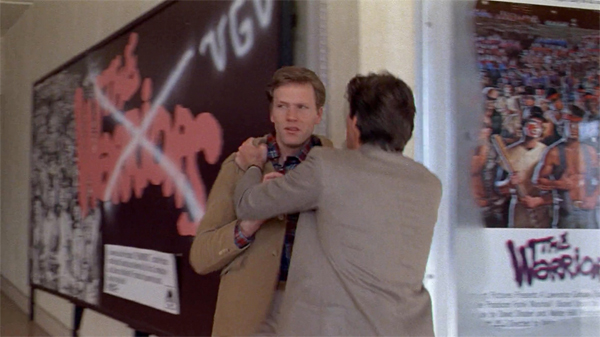 …it has so much of a vibe of what we think of as “the ‘80s.” In fact, some of that might even be creditable to the popularity of the film. Giorgio Armani providing Gere’s wardrobe “established the Armani brand, and not just for years to come, but forever,” according to Clothes On Film. GQ said that it “inspired a generation of men to adopt his silk, linen and Italian cotton suiting.” The Italian designer’s lighter, looser double-breasted suits soon became the epitome of cool on Miami Vice and “the look that dominated ‘80s business” according to Grailed. Real people were trying to get fashion tips from Julian just like Detective Sunday (Hector Elizondo, THE TAKING OF PELHAM ONE TWO THREE, PRETTY WOMAN) in the movie.

But maybe Schrader was just in the right place at the right time. He told GQ that when John Travolta was slated to star before quitting to do URBAN COWBOY, “his manager suggested Armani because he knew that he was on the verge of becoming big.” At any rate, scenes of Julian in his huge wardrobe choosing an outfit, pulling out drawers filled with neatly organized ties and shirts folded with their labels showing (and sniffing a bit of last night’s leftovers from the coke mirror), would fit right into a retrospective attack on ‘80s assholery like AMERICAN PSYCHO or THE WOLF OF WALL STREET, but here it was of-the-moment.

And so was the music. It followed MIDNIGHT EXPRESS as the second film score by Italian Donna Summer producer Giorgio Moroder, who would later be involved in such decade-defining soundtracks as FLASHDANCE, SCARFACE, the rock ’n roll version of METROPOLIS, and TOP GUN. I remember Blondie’s “Call Me” as a hit song from the time – never realized it was the theme song for this. It’s a fuckin great song, and most of the score is built around it. I guess it’s about calling Julian if you need a well-dressed male escort disguised as a limo driver who knows some Swedish. Or maybe it’s about the part where he writes his phone number on the forehead of the senate aid he catches following him.

It’s hard to picture Schrader, known for his strict Calvinist upbringing and characters isolated from society, being hip enough to suggest this groovy synth music. Maybe that was producer Jerry Bruckheimer, who was only on his sixth film, but the first in a partnership with Paramount Pictures that would include BEVERLY HILLS COP.

I don’t think Schrader sees Julian as a great guy, but he’s not that bad, or as bad as many of his anti-heroes, at least. Obviously he’s pretty vain. At times homophobic, but possibly out of denial. One sign of shitty character is when the police are questioning him and he brings up being hired by “Leon James, black guy.” It will turn out Leon is exactly the guy to blame, but at that point Julian has no suspicion of that, yet tries to drag him into it, and even mentions his race for no possible reason but to take advantage of racial inequality in the justice system. Not cool, Julian. Not cool.

But I think he’s sincere when he defends his illegal business of “giving women pleasure,” even if it sounds bad to claim “Some people are above the law.” He really does have a talent for making women feel wanted and satisfied, and it seems like some of these women wouldn’t get it otherwise. He’s livid when Mr. Rheiman interrupts his sweet talk to tell him to slap Mrs. Rheiman around.

So he’s not unsympathetic as he gets more desperate to (rightly) save his ass. He sees a guy leaving his parking garage who you just know from looking at him has got to be the new pretty boy Leon has working for him, so he’s convinced something was planted in his apartment, and after he goes nuts destroying everything in his apartment – a self-inflicted ransacking – he gives up and begins completely dismantling his car. But then he actually finds something! Vindication.

It’s a cool movie because it has some elements familiar to an enjoyable sort of crime story, but it’s a character and world that’s very different from the usual, and it’s well told by a strong writer-director who was on a roll at the time, working in an of-the-time style that has aged really well. I’m always gonna be more of a ROLLING THUNDER guy, but I’m glad I opened my mind to this one too.

But why didn’t they make a sequel with Gere followed by one with a new American gigolo and then one where the two gigolos team up?

Bill Duke Giorgio Moroder Hector Elizondo Lauren Hutton Paul Schrader Richard Gere
This entry was posted on Monday, September 30th, 2019 at 11:46 am and is filed under Crime, Drama, Reviews. You can follow any responses to this entry through the RSS 2.0 feed. You can skip to the end and leave a response. Pinging is currently not allowed.