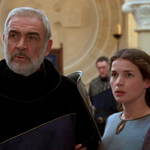 Before he disappears he plants a kiss on her, and she’s got that BRIDGES OF MADISON COUNTY look of suppressed lust on her face, but she tells him to cool it, she’s engaged. And when she gets to Camelot we see that she’s not just being chaste, she really does love Arthur. Yeah, it’s an arranged marriage, and he’s old enough to be her ancestor, but in his defense he does give her a sincere opportunity to back out, pledging to defend her kingdom of Lyonnesse regardless of marital arrangements. You want him to be a sleazy old bastard so you can root for her to kick him to the medieval equivalent of a curb, but he keeps being a gentleman, god damn it. She tells him she’s not gonna back out, she really wants to marry him, and she seems to know what she’s doing.

But Lancelot comes a courtin’. He impresses Arthur so much with an unpadded conquest of The Gauntlet (basically an American Ninja Warrior obstacle course, except with way more axes swinging at your head) that the King brings him into the castle and considers putting him on the Round Table. So Lancelot’s around and keeps making eyes at Guinevere, who keeps thinking up excuses to get him out of there before she, you know, trips and lands on his dick, or who knows what. 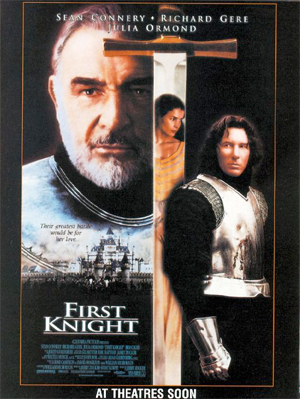 There’s this whole plot unfolding about an impending war between Camelot and ex-Round Tabler Malagant (Ben Cross, UNDISPUTED II: LAST MAN STANDING), who kidnaps Guinevere, so Lancelot has to rescue her again. (Kind of like a second date.) The story is secondarily about this conflict and primarily about the sexual tension between Guinevere and Lancelot. Or actually kissing tension. It’s kinda cool how much lusty passion they squeeze out of one withheld kiss. No boning at all.

It’s interesting that this came out the same summer as BRAVEHEART. There are definitely similarities. Both have an aimless warrior who finds purpose in a war against the troops of a dishonorable imperialist. In both he takes part in large scale battles with horses, swords and arrows, playing clever strategic tricks. In both he’s irresistible to women, and he fucks the king’s lady. Or kisses her at least. I guess in that respect it’s more like POCAHONTAS.

But this king is on his side, so it complicates thing. Then at the end it switches up and the king becomes the braveheart, because he’s the one that goes out in a blaze of proud, manly, stubborn glory in the public square. All he has to do is swallow his pride and bow to Malagant. Instead he’s like “Okay yeah, no problem bud, I am a good bower, let me get ready, do a few bowing stretches here. Okay I am ready to bow to you now, here I go. Actually give me one more moment. In fact, let’s do a count down here actually. Three. Two. One. Begin bowing sequence. Preparing bow. Here goes the bow. I am now PSYCHE I AM NOT BOWING I AM STANDING UP AND WAVING MY SWORD DEFIANTLY TO TELL EVERYONE TO–” [instantly run through by like three swords]

It was bad luck coming out a little after BRAVEHEART, because the battles aren’t as brutal or engaging. A few of those guys look like they have no business swinging a sword, to be honest. Lancelot was much more fun swashing buckles and doing derring to show off to civilians than putting on a helmet and running into a mob of guys who look just like him. But Zucker’s camerawork is pretty energetic and there are some beautiful shots of moonlight reflecting off the armor of an army approaching on horseback.

The character of William Wallace was proud to act like a brute, but these guys see themselves as civilized fancy lads. While BRAVEHEART is about protecting the homeland, FIRST KNIGHT is about protecting ideals. Arthur loves Camelot not just because it’s beautiful at night, and because he built it, but because it really stands for something he believes in. The Round Table, where everybody comes and lays their swords down on the table, and nobody is at the head, is no bullshit. And he goes around telling people, including Lancelot, that he loves them. And he’s a hugger! So when his rage over his protege kissing his woman causes him to betray those ideals, and put on a public treason trial over the passive-aggressive objections of the other knights, it’s genuinely disappointing. Man, just because you pulled a sword out of a rock one time you think you get everything you want.

The stakes seem high. Luckily he quickly falls into “what have I done?” mode and thinks about the future of Camelot.

Gere is very charismatic as Lancelot at the beginning, but I think as the movie focuses on him less he has a hard time keeping it up. Then there’s a part where he hides behind a bush and cries, and for a second it seems like it’s because he can’t get the girl, and you feel like telling him to man up. But then you realize it’s because he’s remembering his family getting killed. I guess that’s okay. Even though Batman wouldn’t cry like that.

Connery is really good as well. I think I’ve confessed this before, but I don’t have the same love affair with Connery that the world does, especially in this era. When he’s supposed to be wacky, like in INDIANA JONES AND THE HILARIOUS RELATIONSHIP HE HAS WITH HIS OLD MAN he’s like nails on a chalkboard to me, or a bomb on a lead-lined refrigerator. But here he’s charming and inspirational. A rugged man who cleans up well. I wonder if Guinevere ever considered a PAINT YOUR WAGON type marriage scenario?

Ormond really is the highlight. Her Guinevere is glorified as an ideal queen, introduced playing games with kids but stopping to take charge when informed of an emergency. (Draw your own 9-11 parallels.) She’s not a fighter, but frequently goes into danger with the men. But it’s her vulnerability that makes her interesting, and all of it is in her eyes. In scene after scene Ormond conveys many conflicting emotions without saying a word. It’s hard to imagine someone else making such a perfect corner on this love triangle.

FIRST KNIGHT did okay. It opened against SPECIES, which came in above it at the weekend box office, and below the previous week’s APOLLO 13. But of those three only SPECIES got three sequels, so who’s laughing now, knights and astronauts? Not you.

Director Jerry Zucker, of course, started out making spoof movies like THE KENTUCKY FRIED MOVIE and AIRPLANE! with his brother David. Remember how David came out as conservative, made that terrible movie AN AMERICAN CAROL and complained about how hard it was for right wingers in Hollywood? That’s funny, because in the last 20 years he got to direct that, BASEKETBALL, MY BOSS’S DAUGHTER, three SCARY MOVIE movies and a TV movie called H.U.D. Jerry has only done 2001’s RAT RACE. He has been a producer on a few things though, including MY BEST FRIEND’S WEDDING and, weirdly, FAIR GAME, the movie about the outing of CIA agent Valerie Plame.

Screenwriter William Nicholson, who had been known for SHADOWLANDS, has worked on many classy period pieces since, including GLADIATOR, ELIZABETH: THE GOLDEN AGE, THE MISERABLES, MANDELA: LONG WALK TO FREEDOM and UNBROKEN. Meanwhile his co-story-providers Lorne Cameron & David Hoselton, who had gotten their start on LIKE FATHER LIKE SON, found their way into animation, working on BROTHER BEAR, OVER THE HEDGE and in Hoselton’s case THE NUT JOB.

Connery is primarily known today for turning down THE MATRIX and LORD OF THE RINGS and winning a 1999 Outlaw Award for Inspirational Catch By An Old Dude for his dalliance with Catherine Zeta Jones in ENTRAPMENT (age difference: 39 years), an achievement which unfortunately dwarfed this fine movie where he married a lady only 35 years his junior.

Ben Cross Jerry Zucker John Gielgud Julia Ormond King Arthur Richard Gere Sean Connery William Nicholson
This entry was posted on Tuesday, July 7th, 2015 at 11:11 am and is filed under Fantasy/Swords, Reviews. You can follow any responses to this entry through the RSS 2.0 feed. You can skip to the end and leave a response. Pinging is currently not allowed.