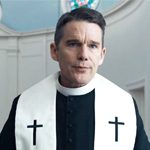 He cares about the job, but it seems like it’s one of those transferred-to-Antarctica type situations. We slowly piece together some of the problems he has, the things he’s punishing himself for and how his life went south after the death of a son in the military. He writes journal entries in a spiral-bound composition notebook which we hear as calm, reasonable sounding voiceover, but sometimes he’ll casually drop in some bit that makes you do a double take, like when he laments, “If only I could pray.” Uh… you seem like a guy who would pray, is all I’m saying.

Maybe he could just go on living like this and get by, lonely and sad but keeping a stiff upper lip going through the motions in his barely furnished living quarters with its tightly-made bed. But he gets a push from a younger couple among his congregants. Mary (Amanda Seyfried, THE MISERABLES) asks him to talk to her husband Michael (Philip Ettinger, BRAWL IN CELL BLOCK 99), a depressed environmental activist who believes it would be immoral to bring their unborn child into this dying world. At first he seems kind of thrown off, like “Why would somebody want my advice?,” even seems like he’s trying to convince her she’d have better luck somewhere else. But she wants his help so he gives it. 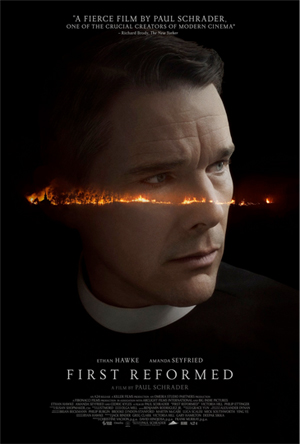 The conversation is intense. Michael sees nothing but doom. He’s bitter and angry and he’s armed with scientific data and personal stories of friends murdered for their activism. But Reverend Toller has the story of losing his son, and he takes a valiant run at explaining why despair doesn’t have to be surrender. Later, in his notebook, he describes the debate as “exhilarating.” It’s rare to see a movie where theological and philosophical conversations actually do feel deep. I guess that’s Schrader’s strict Calvinist upbringing we always hear about. He’s not faking it. He really thinks about this shit.

I don’t want to say too much, but the problem of trying to help this couple gets weirder and worse, and leads to the Reverend getting in trouble with The Man. See, Michael opens Toller’s eyes to the notion that the damage mankind is doing to the earth is an affront against God. Because of this, Toller’s name is mentioned in a newspaper article related to environmental activism, and that raises the ire of Balq (Michael Gaston, SUDDEN DEATH), some local businessman who happens to be underwriting the upcoming celebration of the 250th anniversary of First Reformed, to be simulcast at Abundant Life, the megachurch presided over by Toller’s boss Jeffers (Cedric the Entertainer, credited as Cedric Kyles so as to not create unrealistic expectations of entertainment).

These are very believable antagonists – Jeffers seems genuinely well-meaning and understandably concerned about Toller’s well-being, but gets impatient with religious purity because how do you have time for that shit when you have to run a giant organization? And Balq seems like neither a mustache-twirler or a fake-saintly hypocrite. He’s kind of a macho capitalist who thinks he’s a cool, rich good guy. Exactly the asshole to say that talking about the environment is too “political.” It’s feels so real when Toller argues that point with him, because he’s so right but what he says goes over about as well as you’d expect in real life. Infuriating.

Schrader uses a classical style he wrote about in his 1972 book Transcendental style in film: Ozu, Bresson, Dreyer – long, static shots, no music (except I guess ambient sounds by Lustmord, a.k.a. Brian Williams [music sound designer, BRIDE OF CHUCKY]). He says the 4:3 aspect ratio was inspired by Pawel Pawlikowski’s IDA, which is a fancy way of saying Jonah Hill’s MID’90S. This sparse simplicity is a perfect reflection of the protagonist’s lifestyle, but I wish it was on film because this squeaky clean digital video feels a little more cheap-indie than beautifully minimalist. And of Schrader’s two single-minded self-flagellating zealot movies of course I prefer the ornate visuals of MISHIMA. But those wouldn’t work here.

It’s funny – since I’ve seen movies before I had to keep wondering if there was gonna be some twist like Mary is trying to set up Michael or get insurance money or something. Normal thriller shit less interesting than what the movie is actually about. No, it’s pretty straight forward – it’s a story how if you’re in a bad place and you’re a certain type of person, martyrdom might seem like a pretty good solution. Toller’s cause is much more persuasive than Travis Bickle’s. The world is in big trouble and Balq is a pretty example of why we might not be able to stop it.  So it’s a kick when it starts to become clear what Toller is planning, and especially when he unexpectedly starts doing extreme shit like (BIG FREAKINESS SPOILER) wrapping a bunch of barb wire around himself. You go from “you gotta admit he’s right” to “hey, I don’t know this guy, I just met him.”

Obviously Schrader is also saying something about organized religion, and in such a perfect way – this sad idea that the older, presumably purer version of Christianity is relegated to being a fuckin tourist trap, a cute thing people visit just to say they did, and the version more people follow is molded by a corporation that needs a Christianity that doesn’t cut into profits. And I don’t really think it’s meant this way, but religion in the movie can also be a metaphor for any other thing that gets watered down and compromised and that being a purist about it makes you a crazy person.

The Q&A podcast has a real good episode where Schrader bluntly lays out his formula for this type of screenplay. He also says that (ENDING SPOILERS FOR TAXI DRIVER AND FIRST REFORMED) he never intended people to think Bickle might be dead at the end of TAXI DRIVER but he liked that interpretation so he intentionally planned for this one to be able to be read two different ways. Oh great – encourage the fan theories, why don’t you?

I kinda dug Schrader’s Nicolas-Cage-starring THE DYING OF THE LIGHT, at least with the understanding that it was taken away from him and presented incorrectly. And I still haven’t seen THE CANYONS or DOG EAT DOG, which I heard only bad things about, but I respect the idea of Schrader just being a fringe weirdo doing offputting don’t-give-a-fuck crime movies. So I really didn’t expect to see him suddenly doing something so controlled and personal and deservedly Oscar nominated. It’s such a good mix of that dark character study he does so well with this smart theological commentary we sort of knew he was capable of. And for Hawke it’s a career highlight, a role taking full advantage of his inherent likability to make us empathize despite his flaws and follow him right off a cliff.

Just like its lead character, FIRST REFORMED is simple and easy but also passionate and then it sneaks up on you and makes you spit out your coffee and then keep thinking about it later. Can’t wait for SECOND REFORMED.

Amanda Seyfried Cedric the Entertainer Christianity Ethan Hawke Michael Gaston Paul Schrader Philip Ettinger
This entry was posted on Tuesday, February 26th, 2019 at 11:05 am and is filed under Drama, Reviews. You can follow any responses to this entry through the RSS 2.0 feed. You can skip to the end and leave a response. Pinging is currently not allowed.