The Taking of Pelham One Two Three 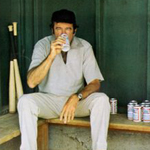 The first and most important thing that must be said of THE TAKING OF PELHAM ONE TWO THREE is that it has one of the most badass theme songs ever, and without even leaning on the crutch of wah wah guitar. A deep ominous BA-DUMP-BUMP-BUMP alternates with tension building horns and violins or something in a higher pitch… well, I’m dancing about architecture here but trust me, this theme song WILL kick your ass. The score is by David Shire, who strangely has done mostly TV movies but recently did ZODIAC. But it has that catchiness and strutting quality of the best Lalo Schifrin, like ENTER THE DRAGON or something, where after you see the movie you can’t help but walking around picturing it as your theme music.

(By the way, if you watch the original theatrical cut of PAYBACK you can tell that the badass music during the opening montage is inspired by this. They did a good job, but not as good.)

And the movie does a pretty good job of living up to the theme song. It’s directed by Joseph Sargent who is also mainly a TV guy, but the feel is cinematic. Watching it now I realize this must’ve been a huge influence on many of the DIE HARD type movies and especially DIE HARD WITH A VENGEANCE. It doesn’t have the one guy in over his head and physically fighting the bad guys, but the criminal plot, setting, characters, sense of humor and tone are all very DIE HARD.

A group of men (all wearing matching hats, coats, glasses and mustaches) commandeer a New York subway train. They dump all but one car, keeping the passengers under the watch of some machine guns, and call in to demand $1 million in one hour. If they don’t get it they will begin killing one hostage each minute.

The hero is Walter Matthau, head of the transit police, and he spends most of the movie at headquarters talking to the hostage-takers on the radio and trying to figure out how to stop them while trying to follow their instructions enough to keep them from killing anybody. The lead villain is Robert Shaw as Mr. Blue, who we learn is a mercenary but who Matthau just says is “a fruitcake” because of his accent. Come to think of it he’s kind of like a Grueber… a cold-hearted, European-accented villain with an air of superiority. He has some great lines like when he’s holding a gun on a guy who shot at him and says, “You a cop?” When the guy nods Mr. Blue says “Well done. The mayor will go to your funeral.”

And by the way, yes, this is the movie that had thieves code-named after colors before RESERVOIR DOGS.

Like DIE HARD it is not a comedy, but has you laughing all the time. It’s a serious movie with a wiseass sense of gallows humor. The situation is never played for laughs, but the dialogue between the transit authorities is constantly funny. They all have that New York attitude so while negotiating with these dangerous men they can’t help calling them maniacs or lunatics in the middle of otherwise compliant sentences. They are all quick with insults and with grim jokes about the deep shit they are in. One of Matthau’s colleagues is Jerry Stiller, by the way. So these are regular working class type shlubs, not action heroes. If it was made in the ’80s instead of 1974 Dennis Franz would be in the movie for sure.

And Matthau is fantastic as a hero who mostly works from behind a desk but who, as soon as he sees a window, runs in there himself and takes care of business. It’s believable because Matthau is not exactly a tough guy but he does have some grit, he seems capable.

And as a thriller it’s pretty effective. You have the innocent people in close quarters with scary villains, the city workers in control rooms looking at lights, making phone calls, dramatically assessing the situation. And the suspense about what exactly these guys are planning to do. I mean they must have some plan for escaping, right?

Tony Scott is doing a remake now. I’m not sure if I’ll be watching that after MAN ON FIRE and DOMINO, I’m afraid I might die from his editing. And I guaran-fucking-tee you they won’t match the theme song (I doubt they’ll even make an attempt.) But who knows, maybe it will be good and if not at least it will remind people of the original and get them to watch it. It’s good stuff.

This entry was posted on Friday, May 2nd, 2008 at 10:30 am and is filed under Reviews, Thriller. You can follow any responses to this entry through the RSS 2.0 feed. You can skip to the end and leave a response. Pinging is currently not allowed.

7 Responses to “The Taking of Pelham One Two Three”