The film is directed by the Hughes brothers. Now I can’t remember if these are the brothers behind Fargo, or the ones behind Dumb and Dumber, or possibly the ones who did the Matrix. WHO the fuck knows. But whoever they are THESE are the individuals who ought to be doing the Iceberg Slim movie! They are a-class type filmmakers and obviously after this movie they know a thing or two about pimps. Now in my opinion there are a LOT of directors in hollywood who have intimate knowledge of the prostitution industry, however not necessarily the pimp part. Yes it is important to understand prostitutes in order to do Pimp: The Movie however please keep in mind hollywood these are street hoes we are dealing with, not callgirls or escorts. The Hughses know these pimps. Hell I’d like to see some of these individuals in small parts in the movie. Philmore Slim would DEFINITELY fit right in in the world of the book. 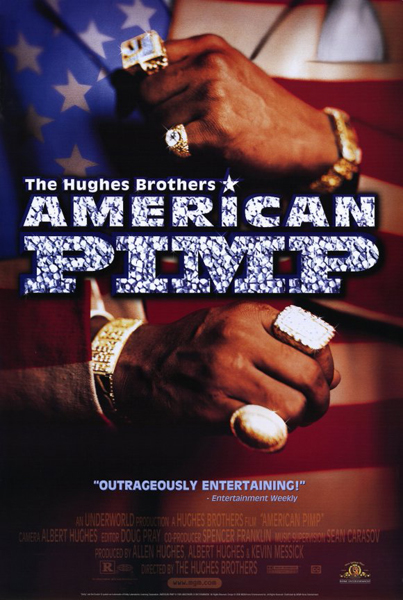 Anyway, let’s talk about American Pimp. This is of course made up mostly of interviews with real pimps, talking about their profession and their experiences. Dudes with names like “Rosebudd, with two d’s for a double dose of pimpin’.” There are many different types of pimps here. There’s an old legend who must be 70 years old. There’s a short little guy who seems more like a graduate student than a pimp, who talks about how his dad was a pimp but he didn’t ever push him into the industry.

There are some amazing moments in this picture. There is one pimp whose mom has a picture of him in his pimp outfit hanging on her wall. She’s proud of him. She says, “The doctor told me he was gonna be special.”

There’s one pimp whose cell phone rings during the interview and he says, “Lemme see which bitch this is.” When he talks to her he breaks the world record for most times saying bitch in the least time. It’s like, “Hey bitch what’s up bitch, don’t worry bitch everything’s okay bitch just go get my money bitch, thanks bitch.” I mean even if her name was bitch, it would sound wrong. “Hey Vern thanks Vern don’t worry Vern go sell your pussy Vern.”

Most of these guys are very likable. The legendary Philmore Slim seems like a harmless, nice old grandpa. These dudes have alot of charisma and flair and they have the same kind of passion for their alternative lifestyles that those fuckjobs in Trekkies have. But jesus you still gotta feel sorry for these poor girls they are using. I mean there is this girl in the movie who must’ve just turned 18, if that. She’s going out on her first job and the motherfucker is talking to her like he’s training her to flip burgers.

I mean nothing against friendly bosses. It’s better than one of those assholes that’s always threatening to fire you if you’re late for work one more time or whatever. But this girl looks so dead in the eyes, she obviously doesn’t want to do it, and probaly wouldn’t be if not for the drugs and molestation and etc. How these fuckers can get off with a girl like that is beyond me.

And then every one of the pimps admits that their hoes don’t get a percentage of the profits. Not even stock options as far as they mention.

This is a real well made movie. There is lots of funky soul from the seventies on the soundtrack. You get to see these boys on the job, or in retirement, or in jail. They show off their photo albums of them wearing giant hats and gold chains. There is even a giant gold ring shaped like a gal sucking a dude’s johnson. Which in my opinion is a little on the tacky side but then I’m not fashion expert I tend to dress down a little and not wear jewelry so don’t listen to me. I guess it looks pretty nice as long as you don’t wear it to church or a job interview or something like that, that might be considered inappropriate I don’t know.

There are also some clips of pop cultural representations of pimps which these pimps don’t take kindly to. They even brush off The Mack and Iceberg’s book as being unrealistic. There is a clip from Monkey Hustle which has Rudy Ray Moore playing a pimp, but I can’t find the fucker on video so please send it to me thanks I will review it. I think it’s funny how they always interview the pimps while they’re driving around, like it’s that tv show COPS or something.

I really like how it is all put together, it gives a great look into why the pimp world is so attractive to many people but also shows why the others are right to be repelled by it. But even if you come out thinking these dudes are total bastards, you will at least have a human face behind the giant sunglasses and snake skin boots. You will understand where they are coming from a little bit more. You might even feel a little sorry for them when they talk about how sad it is when someone from your stable is murdered, although… I mean you gotta put some blame on the pimp, I think. He sort of failed in his job of protecting the poor gal.

Hughes Brothers pimps
This entry was posted on Saturday, June 10th, 2000 at 10:39 am and is filed under Documentary, Reviews. You can follow any responses to this entry through the RSS 2.0 feed. You can skip to the end and leave a response. Pinging is currently not allowed.