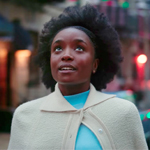 But Fonny is, as Tish puts it, “behind glass” when she brings him news that they’re going to have a baby. And not for the last time we will hear firm, assurances that things will be okay, people will stick together, odds will be overcome. END_OF_DOCUMENT_TOKEN_TO_BE_REPLACED