Chris Thor Hemsworth plays Sam, a Chicago knucklehead who thinks the Lord is smiling on him when a suitcase full of money is thrown over an overpass and lands on the hood of his station wagon. He’s not a streetwise tough guy of any kind, not a guy that knows how to handle the situation. He’s just a dipshit who thinks since nobody saw him take it as far as he knows he can just live off the money and there will be no consequences. At first his wife Leslie (Victoria Profeta) is nervous about it, but she decides to go along with it anyway. They pay off their debts in cash, buy a new Range Rover, a new house, new furniture, new TV.

One problem: it turns out it wasn’t magic elves in the sky that dropped the money as a gift to whoever found it. It was actually dangerous criminals in the middle of a robbery who feel that they should probly get it back. The man who stole it (Sean Bean from FELLOWSHIP OF THE RING) has been caught, but he sends his twin brother (Sean Bean from THE TWO TOWERS) to find the money.

I like the systematic way he goes after it. All he knows is that it was a dude in a station wagon with wood paneling. But he finds a way to track all of the recent cash purchases of nice cars in the area, and goes to talk to each of the buyers until he figures out which one used to drive that crappy car. He finds Sam and Leslie in their new house and terrorizes them by making a big ugly scratch across a brand new table. You expect him to grab Leslie (fresh out of the shower) and threaten her in order to get what he wants out of Sam, but he goes the other direction: he starts smashing all their nice new stuff, and they give in in time to save the TV. 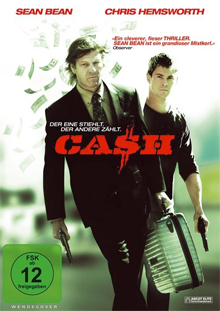 Usually in a story like this the scary bad guy would just point a gun and say “You have 24 hours to get me my money” or whatever. Bean is more of a hands-on enforcer, so he invites himself to sleep over and go along with them as they go get all the money they can from each of the banks and stashes that they hid it in. They think they might get away with just that and keep all the shit they managed to buy already (in fact, that’s what behind-bars-Sean-Bean is willing to settle for) but this guy insists on making them repay the entire sum, and goes with them to sell back the car, the house, etc. A couple times it actually comes in handy to have a scary smart guy with them. He knows more about the law than they do and tries to help leverage the best deal.

Of course after that there’s still a balance, so he forces them to begin committing armed robberies. He’s just not gonna leave them alone until it’s all paid back.

I really like the absurd levels he goes to, and the performance by Bean, but the tone of the movie is all wrong. The music leads me to believe that it’s supposed to be a comedy, but it’s not very funny. For the most part it seems like it’s played as a serious thriller, which I think is the right idea, but the music seems to disagree and keep trying to push it to be hilarious.

There is definitely some satire about materialism and greed, so the couple’s exaggerated attachment to their belongings works. But there are many points where I feel like they’re not acting believably enough, it doesn’t ring true anymore. For example the first time Leslie is forced to rob a convenience store she should be practically shitting her pants, instead she instantly gets excited, calls the clerk an asshole, steals a Ding-Dong and smiles on her way out. It’s a betrayal of the tension that the movie has built up to that point. They could keep the joke about her being proud that she got more money than Sam, and treat everything before that as real, it wouldn’t deflate the thriller part of the movie and I think it would also be funnier.

It seems like the robbery spree is less thought out than some of the other aspects of the movie. They do 10 robberies in a day in broad daylight with no masks without getting their faces on a security video. They’re all over the TV and they keep doing it and never have to run from any cops. And there’s both an Asian lady and an Indian Sikh whose victimization is played for funny-accent hilarity.

Director Stephen Milburn Anderson previously did SOUTH CENTRAL, a lesser known entry in the ’90s wave of independent hood dramas. That movie starred Glenn Plummer (SHOWGIRLS) so he has a cameo here as one of the people who bought a car with cash. And his name is Glenn the Plumber! He has it painted on his van. And before they show him they first show his butt crack. Do you get it? Because he is a plumber. Because his name is Glenn Plummer. It’s hard to explain.

Mike Starr (ON DEADLY GROUND) also plays one of the cash guys, but his character is named Melvin Goldberg instead of Mike the Star.

I have to admit, Sean Bean is one of those actors alot of people flip for but I had a hard time remembering who he was. I guess Brits might know him for the SHARPE series or something. I’d seen him in GOLDENEYE, RONIN, the LORDs OF THE RINGSes, EQUILIBRIUM, NATIONAL TREASURE, SILENT HILL and DEATH RACE 2 without paying much attention to it being the same guy, but then I finally watched season one of GAME OF THRONES, so I get it now. That’s a good show, but I gotta admit that it’s too complicated for me to follow on my own, like the first part of RED CLIFF without the built-in excuse of not having a background in Chinese history. My recommendation is if possible do what I did, watch it with a girl who has read the books who can remind you who all the different families are and shit. At one point I asked where this Kal Drogo barbarian guy was in relation to all the armor guys, she jumped up and said “Let me get the map!”

This is two-thirds of the way there to a real good movie. The combination of Bean’s performance and the ridiculous lengths his character goes to get the money back are worthy of a great thriller, but the lapses in believability and tone control fuck it up. I want my money back!

No, I don’t want my money back. I just said that, because of CA$H. You get it? Money.

NOTE: Don't talk about Game of Thrones season 2 in the comments, I haven't seen it yet

Chris Hemsworth DTV Glenn Plummer Mike Starr Sean Bean Stephen Milburn Anderson Victoria Profeta
This entry was posted on Thursday, June 21st, 2012 at 10:49 am and is filed under Reviews, Thriller. You can follow any responses to this entry through the RSS 2.0 feed. You can skip to the end and leave a response. Pinging is currently not allowed.