Despite competent filmatism and the best efforts of a strong-for-DTV cast – Gary Daniels, Zoe Bell, Robert Davi, Ernie Hudson – this is a completely flavorless wafer. You guys know I can enjoy a good formula movie, but this is the formula without any movie attached. No tiny little touches of distinction, no mildly original new half-spins on the old cliches, and most of the dialogue sounds like placeholders quickly typed in where somebody would write the actual dialogue later on if they had a couple free minutes. You can’t tell me there was a second draft or a proof read on this thing. 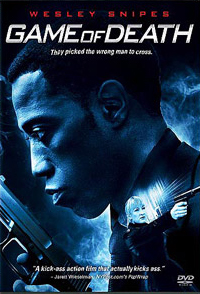 A few lazy, obvious lines like that you can get away with; a whole movie where everything that happens is a cliche and everybody talks about it in that straightforward expository type of way is just weird. For example instead of establishing a mentor/father figure relationship with his boss they just have Gary Daniels say to him, “Yeah, we killed Dietrich. Your beloved mentor. He was like a father figure to you, right Marcus?”

For most of the movie the CIA stuff doesn’t seem to quite fit. I’m pretty sure Snipes was originally just a bodyguard for Davi, because he mostly just does that. Davi has a heart attack, Snipes takes him to the hospital and has to defend him from rogue CIA agents led by Daniels who want to kidnap him and take him to some other guy to withdraw a bunch of money from a vault.

(When they do it’s three suitcases that are supposed to hold $100 million in $100 bills. Can you really fit a million bills in three suitcases? I guess I wouldn’t know.)

Anyway I think they were worried it wasn’t working, or they wanted to get away with some shit when Abel Ferrara was out of town, so they added a whole wraparound story where actually Marcus is a CIA agent and he feels bad about what happened and confesses to Father Ernie Hudson. Because in movies anything Catholic = themes of redemption.

The Internet’s Movie Data Base credits Jim Agnew (Argento’s GIALLO) for the screenplay and Megan Brown for the rewritten one. Brown doesn’t have any other writing credits but has many bit parts as an actress, ranging from “Mileena” in one episode of MORTAL KOMBAT: CONQUEST to “Woman Kissing Benjamin (uncredited)” in THE CURIOUS CASE OF BENJAMIN BUTTON. I don’t know if it’s either of these two or a producer or what, but what I would really like to know is who is responsible for the movie’s title, and how do they explain themselves? If your job is to play “Cross-Eyed Mom” in ROBODOC then that’s fine, I don’t necessarily expect you to know that there is a very famous Bruce Lee movie called GAME OF DEATH, although you might happen to know that. But if you are in the position of making up the title for the new Wesley Snipes action movie then yes, I’m gonna assume you know that one was already used, or could find it out by using the new computers they have now.

It might be more forgivable if there was something going on the story, some sort of a game that involves death. A death game. But there’s not. He runs around in a hospital shooting for a little bit. They try to steal the money. Nothing very gamey about it, in my opinion. Might as well have been ENTER THE DRAGON. He did enter a couple buildings. And a car. He might be sort of a dragon, it’s hard to say.

They should’ve had a part where he’s wearing a yellow suit and he shoots a really tall guy, just to keep us wondering.

The only real parallel between GAME OF DEATH and GAME OF DEATH is that both kinda suck. The original GAME OF DEATH is more offensive because it takes footage from an unfinished masterpiece and turns it into a bunch of bullshit using obvious fake actors. Maybe it would’ve been a good title for this if Wesley only got to shoot a few minutes before he got locked up and the rest was done showing the back of his stunt double’s head. But that’s not the case. The thing is, Snipes is as good as always. He’s into it. This is serious, good-posture Wesley, but he gets in a little subtle humor here and there, like the pained look he gives when a nurse tells him “I always wanted to date a bodyguard.” The fight scenes, choreographed by BEST OF THE BEST 1 and 2’s Dae Han himself, Simon Rhee, are pretty good. They’re shot and cut way better than ART OF WAR 2 but similarly showcase the great fighting style of Snipes and his stunt double (not that I noticed a stunt double, but that’s how I know he does good work). Snipes gets lots of good moves and poses and even does a Seagal style aikido handslap defense.

And he looks good, honestly not much older than in the BLADE movies, not any slower, if anything a little thinner. It’s not like the fickle public is turning on him for getting fat and grey, ’cause that ain’t happening. So this brings us back to that great riddle: why is BROOKLYN’S FINEST the only one of Snipes’s last ten movies that was a theatrical release? (and a small one at that.) Of course I’m not saying those other ones are good enough to be theatrical, I’m just saying why the fuck doesn’t anybody hire him for a good movie?

Meanwhile rumors fly of various other actors being considered to play Blade in new movies. Okay, I understand that we’re now in a disposable or cannibalistic type pop culture that believes only shiny new things are good and as soon as they’ve been exposed to air for over 18 months they must be destroyed and replaced with a newer, more expensive version starring younger actors. Within five years I predict that every comic book character or shitty ’80s sci-fi movie will have one or more $600 million 3-D prebootquelmakes starring an all child cast like BUGSY MALONE.

So I get it, of course they don’t want to make another awesome Blade movie that would be great, make people happy, improve our world and culture, etc. They would rather lose more money making one that’s not as good. They call it the movie business, not the making lots of money but also trying to do a pretty good job so that it’s better for everybody and so they can look themselves in the mirror and not shame their parents and countrymen business.

My dream is to transfer John McTiernan into the same joint Wesley’s in and have him direct a new UNDISPUTED. It’s minimum security, so maybe we could smuggle some cameras and Ed Lover in there, I don’t know. Short of that we’re gonna have some weird supernatural western called GALLOWWALKER and then we’ll have to wait a little while for a new Snipes movie. Maybe during that time you Hollywood types can get your fucking shit together, stop shaming yourselves and write some scripts worthy of this largely wasted national resource. I mean you could do a surprise party, make a “Welcome back Wesley” banner and some snacks or whatever, that’s fine. But I’d rather you take this opportunity to have a great fucking movie ready for him. Tax deductible if possible.

GAME OF DEATH comes to DVD and Blu-Ray February 15, 2011. According to the back of the screener it will do well because “Wesley Snipes enjoys huge awareness and a loyal fanbase” and because “Rogue CIA Agent Films are Hot! (Salt, Bourne, Mission Impossible)”

DTV Ernie Hudson Gary Daniels Robert Davi Wesley Snipes Zoe Bell
This entry was posted on Wednesday, January 5th, 2011 at 1:27 am and is filed under Action, Reviews, Thriller. You can follow any responses to this entry through the RSS 2.0 feed. You can skip to the end and leave a response. Pinging is currently not allowed.