To answer your question, no this is not the movie where Jackie is only 3 inches tall and then at the end he turns giant like Godzilla. That’s RUSH HOUR 3. And it’s not a remake of LITTLE BIG MAN either. The title I guess refers to the two lead characters, one a small–time foot soldier, the other a big time general and member of the ruling class. 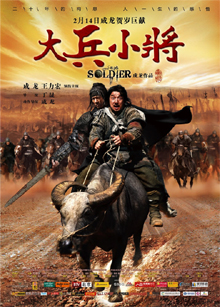 This is an odd Jackie Chan movie, a period piece taking place during what apparently is called the Warring States period in China, in the year A Long Fucking Time Ago. It opens after a huge battle, in a pile of thousands of corpses. Jackie plays a lowly soldier who has managed to survive the battle, and as he’s crawling through he finds a hotshot general (Leehom Wang) from the other side who’s barely alive.

To Jackie this is like finding a bottle that he can turn in to the recycling place for a deposit. He invokes the law of Finders Keepers and takes the general prisoner, hoping to drag him back to his people to collect a reward. He believes he’ll get some farming land in exchange for this guy and he keeps singing a song to himself about what he should grow.

It should be noted that Jackie didn’t survive the battle by being some kind of super badass. He did it by having novelty fake arrows in his chest and playing possum. Same way a young Steve Martin would’ve survived. The enemy general criticizes him for being a coward but over the course of their journey he learns that he’s more of a pacifist. His two brothers died in war and he’d promised his dying father that he would live.

It’s kind of a cool twist because in these period movies you usually root for whoever is the coolest warrior. You think of them as these heroes but you don’t really think about how shitty it is that everybody gets conscripted into being a warrior. They give up their whole lives to fight, and to fight over what? So much senseless killing. Jackie just wants to have some soil and grow some fuckin beans or something. Leave him alone. So you root for the deserter to get away and live peacefully.

But he’s kind of an eccentric goofball too. He constantly says “How marvelous” and quotes things his dad told him a long time ago. He becomes friends with a little bird and carries it around as his pet. When he steps in bear shit he explains that it’s good luck.

As Jackie the martial artist gets older he has to find more roles for Jackie the actor, roles like this with more emphasis on the acting performance than the physical stuff. It’s a funny character who’s kind of inspirational and lovable with his relentless “how marvelous!” positivity and his complete lack of self-consciousness. He doesn’t give a shit if people think he’s a coward, he has very little interest in looking like a bad motherfucker. Dignity is clearly not one of his priorities. And he knows how to use a shit-eating grin or to act stupid to save his ass. Whenever he comes face to face with a horde of ax-wielding savages or a platoon of elite warriors with crossbows this is his reaction: 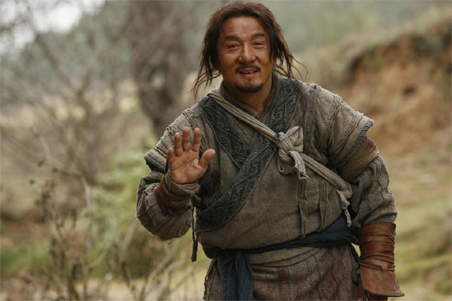 It’s brilliant, ’cause if he came running at them like Bruce Lee they’d probly shoot him, but when they see him standing there like that they hesitate.

LITTLE BIG SOLDIER is light on action compared to the old days, but there are definitely some bits in there that would be hard for a non-Jackie to do. He scurries up trees, falls down cliffs and he does have a couple fights with props, acrobatics and real long bendy poles. They get taken prisoner and have to work together while bound to a big piece of bamboo. He rides some kind of a water buffalo thing through a mud wall, and from the behind-the-scenes shit it looks like that was real.

Alot of it is a two character piece like HELL IN THE PACIFIC, with these two guys sniping at each other, gradually learning about each other’s lives, making bargains with each other, trying to trick each other, eventually bonding with each other (SPOILER). But also they come across other people with other agendas. For example the general’s brother and a band of other well-dressed warriors are on their trail trying to kill the general so he doesn’t inherit the crown, and there’s a group of barbarians that come across them and would like to involve them in some type of savagery or something. Not to be racist, but you guys know how SOME barbarians can be. Not all, but some. There’s a reason for the stereotypes.

But Jackie can compete with the barbarian people. He’s so filthy, so accustomed to bad smells that he’s able to scare them off by breaking off what I assume must be guano or something from the side of a cliff and throwing it at them. It’s like a smell version of Rambo being “trained to eat things that’d make a billygoat puke.”

Apparently Chan’s been trying to make this movie since the ’80s. It’s good but doesn’t have the feel of a passion project like that. He didn’t direct it himself either, he got this guy Sheng Ding who previously only directed something called UNDERDOG KNIGHT.

I have to wonder if he had been able to make the movie a while back if it would’ve had a different ending. It would be a sweet sort of humanistic buddy movie if it wasn’t for the very last part of the movie, which is a total bummer. Sorry to be spoilery. I won’t tell you the specifics, but the movie ends with a horrible tragedy that’s played as a heroic fulfillment of destiny. It seems to be saying don’t worry Jackie, you’re not a coward after all, you can still die for a flag that, according to the historic text at the end, won’t even exist for much longer. Your dad was wrong! War isn’t senseless so much as heroic. How marvelous!

I probly wouldn’t read it that way if it wasn’t such a common trend in modern Chinese movies. They’re making alot of really good movies but they gotta throw that nationalism in there. They’re worse than us in the anti-communist RED DAWN/ROCKY IV days. In this case it’s not Chinese nationalism, it’s nationalism for a long-extinct kingdom. But it’s this nice pacifistic story and then at the last minute it goes: “PSYCHE! Actually the best thing you could ever do is stubbornly stand in front of a bunch of soldiers and get slaughtered over a bunch of bullshit you never even believed in until now! Hooray!” It comes across worse than jingoism, more like brainwashing to crush individualism and create mindless drones willing to die thoughtlessly for their master.

Other than the brainwashing/drone thing though it’s a fun movie, I liked it.

Actionfest Jackie Chan Leehom Wang
This entry was posted on Wednesday, April 20th, 2011 at 1:38 am and is filed under Martial Arts, Reviews. You can follow any responses to this entry through the RSS 2.0 feed. You can skip to the end and leave a response. Pinging is currently not allowed.