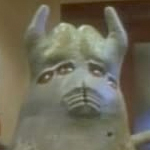 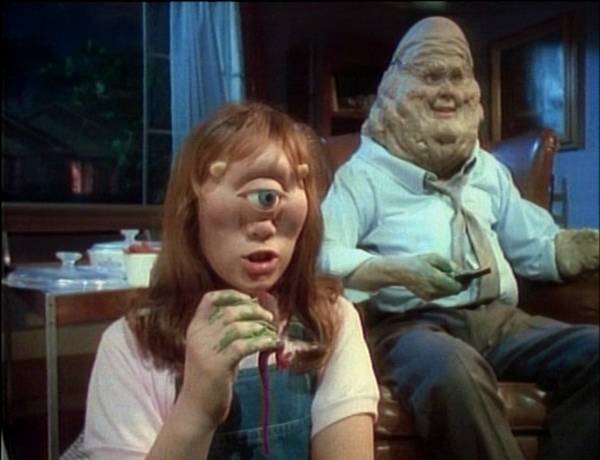 Anyway, there were two Christmas-themed episodes. Glim-Glim, the 13th episode of the first season, was directed by Peter Stein (director of photography for FRIDAY THE 13TH PART 2, C.H.U.D., PET SEMATARY and BRENDA STARR) and written by F. Paul Wilson (author of the novel that THE KEEP is based on).

A tough guy (Mark Hofmaier, one episode of Law & Order: Special Victims Unit) and a calmer guy (Brian Fitzpatrick, ART OF WAR III: RETRIBUTION) and the calmer guy’s daughter (Jenna von Oy, “Six” from Blossom) are hiding out in the basement of a school or something. I knew that dude was supposed to be a tough guy because he wears an undershirt under a flannel shirt under an army-green jacket. But in case you missed those cues he also says “I’m tough. I was raised that way!”

Nevertheless, he’s totally losing his shit, attacking the others in panicky angry guy voice and compulsively blabbering exposition that does not need to be explained to them but is helpful for us. For example, he tells us that everyone else in the town died in one weekend after the arrival of a weird alien blob guy (Ken Walker, mechanics: close up elf, ELVES, also credited as “creator” of this character), who we’ve seen a few shots of. The kid calls him Glim-Glim, which outrages the tough guy. 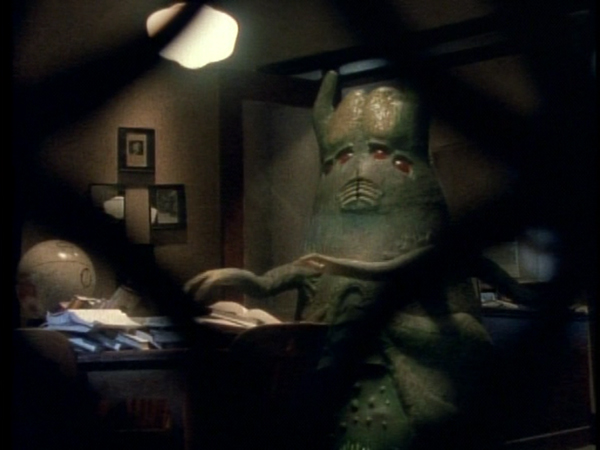 Glim-Glim is always jibber-jabbering high-pitched sounds, but sometimes we hear it translated in an eloquent narrator voice. He sits in the library going through books to learn more about humans, trying to figure out how to communicate with the kid for help in stopping a virus from destroying the human race, and talking about it into a glowing cube. “Must find another way.”

The girl watches him through a vent, holds his tentacle, becomes his pal. She learns to communicate with him and tries to help him in his mission to convince the adults that he’s “a friend.” They don’t trust him at all and the tough guy says shit like “A great hunter aaaaalways needs to know his prey” while gripping a very small wrench that I’m not convinced would even count as a weapon if he hit Glim-Glim with it. To be fair, their fear of Glim-Glim is not strictly xenophobia. It’s also because they keep finding severed heads and shit laying around. (I didn’t really understand that. The episode acts like Glim-Glim is just misunderstood, but apparently he’s ripping heads off like a Predator?)

They lose their shit when they see the alien (consensually) taking a blood sample from the girl using weird alien equipment. The ironic ending is that the dad shoots Glim-Glim, thinking he did something to the daughter, but then he finds her in the other room enjoying a Christmas tree that Glim-Glim made to prove to them that he’s a nice fellow. They forgot it was Christmas Eve!

The girl is excited to tell her dad about the tree, but after a minute remembers that there were just fucking gun shots in the other room, maybe she should find out what that was all about.

Uh, well, you see sweetie the thing is… I mean let me ask you this: who is to say what counts as hurting? 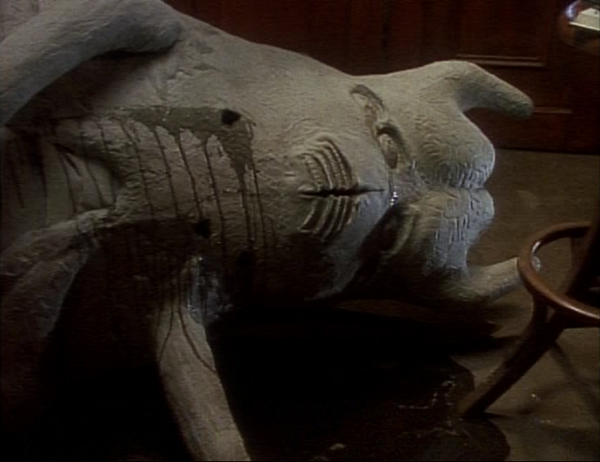 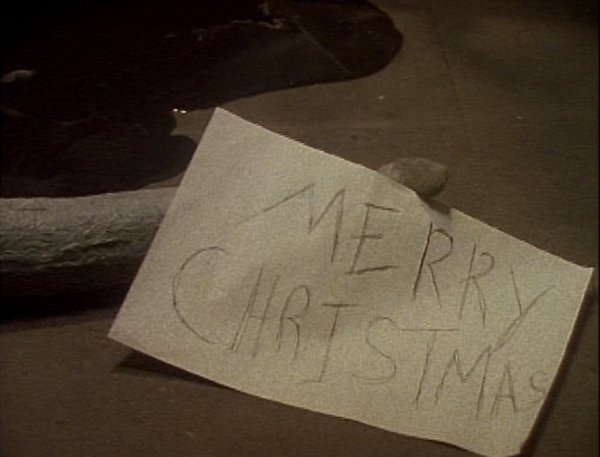 (The episode aired in February, though, so it’s like when DIE HARD, BATMAN RETURNS and some of the HALLOWEEN movies came out in the summer. It transcends seasons.)

The other Christmas episode is “A New Woman,” the twelfth episode of season 3. This one was directed by Brian Thomas Jones (THE REJUVENATOR, POSED FOR MURDER) and written by Edithe Swensen (LOLLIPOP DRAGON: THE GREAT CHRISTMAS RACE).

This one actually aired on December 16th, and it starts out with a Christmas tree and Christmas music. Thomas (Tom McDermott, the Archbishop from GHOSTBUSTERS), the head of a business empire, is not having a great Christmas Eve. He’s in bed, dying, with nasty boils on his face, mostly unconscious but occasionally he’ll sit up and yell “Help me! Help me!” 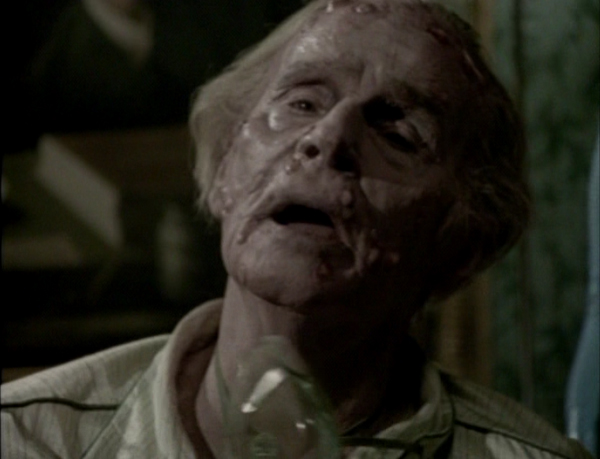 Jessica (Linda Thorson, “Tara King” from The Avengers, THE GLADIATOR, HALF PAST DEAD), a cold Julia-in-HELLRAISER-esque former mistress who will become company president upon Thomas’s death is hanging around trying to close “the Morrisey shelter deal.” She needs to get him to sign a paper before midnight to knock down a homeless shelter and build a highrise. But his nephew David (Dan Butler, MANHUNTER) is there too and wants to make sure that “this heartless act” doesn’t happen and soil his uncle’s memory with greed. “Leave a legacy of kindness behind you as well,” he counsels.

Thomas at first harangues his nephew about not knowing how to make money, but it doesn’t take much to change his mind and have him musing “I wonder if I should’ve cared more about others?” like an amateur hour Scrooge. But he has to trust Jessica to help rewrite the contracts and his will, which doesn’t seem likely.

She’s actually literally about to pull the plug on him when Mason Adams (TOY SOLDIERS, voice of The Cat in the Hat in The Grinch Grinches the Cat in the Hat), as the awfully-fond-of-his-own-voice guy who claims to be a “heart specialist” but says lots of mystical things that imply he’s something else, walks in on her.

She pulls out a checkbook to bribe him to let her murder the old man and he says “Wrong currency. What I need from you is reformation.” These actors are pros, and they do their best with exchanges like:

“Did it ever cross your mind that there might be a spiritual world deeply offended by your crass pursuit of material gain?”

In case we don’t sense a reference to A Christmas Carol, or in case we might think the makers of Monsters are trying to pull a fast one on us and rip off A Christmas Carol, Jessica brings the book up to scoff at it. And the heart specialist causes her to fall over and get an electric shock and have a vision of a future when Thomas is dead and comes back as a ghost or zombie or something, now with much bigger and grosser boils. 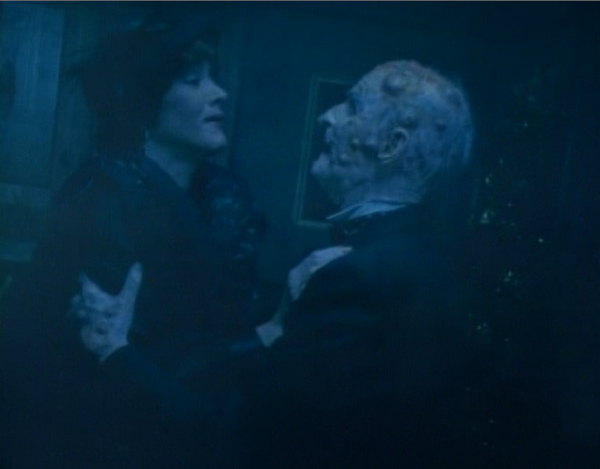 A nice touch is that he doesn’t try to shame her for her greed, in fact quite the opposite. He professes his love for her, declaring “We’re two of a kind, Jessica. Two against the world. And we always won.” She’s looking at this disgusting monster who died an asshole and maybe him saying “you’re like me” isn’t such a compliment.

He’s lonely because these are his only pals: 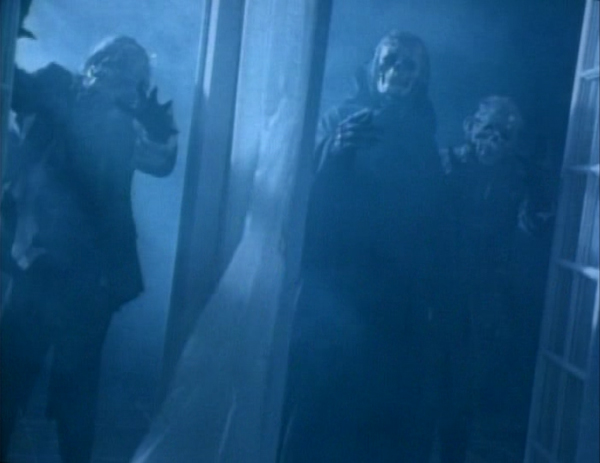 I mean, nothing against those guys. I’m sure they’re cool guys. But it’s gotta be limiting spending all your time with just three ghouls who are always bursting through doors and windows reaching out at people.

To Jessica’s great discredit, she doesn’t seem truly horrified until she sees in a mirror that her face has turned monstrous like his. But at least that convinces her to do the right thing on the homeless shelter deal. When that turns out to give her her looks back she promises to always be a good person.

The so-called doctor tells her “you got scared into reforming” and gives her temporary disgusting hands as a threat. Regret your selfless act and this is what your complexion will look like. So this is more of a “better watch out” approach to goodness than a true transformation. But I guess that’s what you get on a horror anthology show, especially one called Monsters. It’s not Amazing Stories. It’s gotta be kind judgey and mean and ironic to get that Rod Serling cred.

Still, seems kind of unfair that the man “reforms” just by suggestion, the woman has to be threatened with supernatural ugliness.

Anyway, I semi-enjoyed/didn’t hate this visit from The Ghost of Mediocre Syndicated Television Past.

Christmas Christmas horror F. Paul Wilson Richard P. Rubinstein TV
This entry was posted on Thursday, December 20th, 2018 at 11:33 am and is filed under Monster, Reviews. You can follow any responses to this entry through the RSS 2.0 feed. You can skip to the end and leave a response. Pinging is currently not allowed.