DIRECT CONTACT is the new Dolph Lundgren DTV movie directed by Danny Lerner (SHARKS IN VENICE) and written by Les Weldon (RAGING SHARKS). It comes out in the US on Tuesday and has already been released in Thailand, Kuwait, Italy, the Netherlands, Norway, Finland, Denmark and Sweden.When we first meet Dolph as Mike Riggins, life is not the best. #1, he lives in a Balkan prison. #2, he owes a bunch of gangsters money, and some guy spits in his food, so he has to fight everybody and stab a dude in the eyeball. #3, the screws come in and club him like a baby seal. #4, he gets put in solitary. #5, when he pukes up blood a rat comes over and starts eating it.

On the other hand, it’s kind of a cute rat eating the blood he puked up. Not RATATOUILLE cute, but he doesn’t look like he has fleas. Well-groomed. So it could be worse. 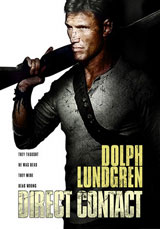 Riggins was an ex special forces soldier busted for weapons smuggling. (We later learn that he was smuggling weapons out, to stop the violence.) But a mysterious CIA type gets him out and offers him enough money to pay off his debts if he’ll rescue some kidnapped girl. So he goes for it.

He doesn’t break out the strawberries and cream right away though. He gets beat up again. He gets tossed out of a car. When he finds the girl she knees him in the balls. He throws her in the trunk and when he takes her out he learns that she was there willingly, she hadn’t been kidnapped, not until he came along and threw her in his trunk.

So he brings the girl around trying to figure out why they wanted her so bad, who to trust and how to get his money without throwing her to the wolves. Along the way of course there are some huge explosions, some cars flipping through the air (both with and without flames), a motorcycle chase, etc. He does some karate, some shooting, lucks out and gets missed by snipers. There’s a respectable amount of violence. Most of it’s not that memorable except the guy who set him up, who goes out like one of Gallagher’s watermelons.

This is completely competent DTV action with a fairly involving (if generic) plot and the usual solid performance by Dolph as a gruff but sweet-hearted tough guy. But in DTV it’s nice to have at least a couple unintentional laughs, so I was happy for the scene that in Seagalogy I’d call the “Just How Badass Is He?” scene. This is the moment where a bad guy looks at the hero’s file and freaks out at how badass he is, listing his areas of expert training, medals, wars he was in, etc. For example, in UNDER SIEGE they say, “Expert in martial arts, explosives, weapons and tactics. Silver Star. Navy Cross. Purple Heart with cluster. Security clearance revoked after Panama.”

But for Riggins all they got is “Ex marine corps, weapons transporter, honorable discharge, prison time, solitary. Guy’s a god damn out of control mercenary! This is worse than we thought!”

Like he’s about to shit his pants because the guy was in both the marines and prison. Funny scene.

This is definitely a decent and watchable DTV, but I prefer more flair. More rats eating bloody puke, more mid-air body explosions. The only other thing that seemed very unique to me is an irony in the story involving Helsinki Syndrome. In the beginning the CIA prick warns that the girl may have developed feelings for her kidnappers, and that’s a lie because she hasn’t really been kidnapped. But then Riggins accidentally kidnaps her himself, and sure enough she develops feelings for her kidnapper. And yes, they consummate their kidnapper-kidnapee relationship using adult situations.

But I don’t know, Dolph is handsome enough that I can buy it when he has relations with much younger women. If there are any straight women or gay men in the talkback maybe they can help me out. What do you think: Helsinki, or pure Dolph magic?

Dolph seems determined to replace Seagal as the most prolific DTV star. This year he already released an older (and terrible) one called RETROGRADE, and he still has three more on deck: COMMAND PERFORMANCE, ICARUS (both directed by him) and a UNIVERSAL SOLDIER sequel. Then of course next year he has THE EXPENDABLES. More than any of the other ’80s action stars I think Dolph deserves a comeback. He’s worked hard on the fringes while maintaining dignity, and he looks more badass now than he did in his so-called prime.

I hope THE EXPENDABLES will knock down some doors for him. Shit man, Stallone should make IVAN DRAGO to go alongside ROCKY BALBOA. Somebody should at least give him some supporting roles in some real theatrical movies and see if he knocks ’em on their asses. I bet he would, but oh well. If that never happens at least he has a good record of mostly watchable DTV and seems to be having fun as a director. Long live Dolph, and may a rat never eat his bloody puke.

Dolph Lundgren DTV
This entry was posted on Wednesday, June 10th, 2009 at 2:49 pm and is filed under Action, AICN, Reviews. You can follow any responses to this entry through the RSS 2.0 feed. You can skip to the end and leave a response. Pinging is currently not allowed.