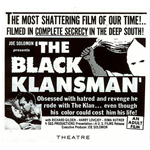 It all starts when a young black man in Turnerville, Alabama, fed up with the bullshit, decides to exercise his right to go into a still-segregated coffee shop and order some coffee. The white customers stare, then insult him, then all get up and storm out. That night the Klan – led by one of the guys who was in the restaurant – murder him, then firebomb a black church, killing a little girl. She was the daughter of Jerry Ellsworth, a singer in L.A. He’s introduced showing up late to his job at the club because, he claims, he was out heroically helping people during the riots (not pictured).

The jazz community that Jerry is part of seems to be very integrated – he’s cool with the white club owner and has a white girlfriend. But when he gets the call about his daughter he channels his rage by choking his girlfriend, yelling at her about being white. I didn’t know if I should be more bothered by the hero doing that or by the implication that it’s a black thing. (But I’m glad she survives.)

Jerry has a plan. He’s light skinned enough that he’s able to go out and get his hair straightened, shave his goatee and comes into Turnerville under a false identity and armed with a file on the local KKK. Cool premise. The trouble with the movie is that, just like the Iceberg Slim adaptation TRICK BABY, they approached the challenge of casting a black man light enough to pass as white by just hiring a white actor. Richard Gilden (THE UNKNOWN TERROR) wears a fake goatee and has a perm, but thankfully doesn’t have skin makeup or try to do an accent or anything. 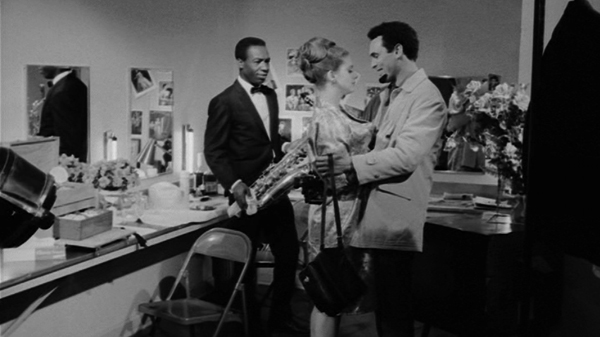 If you can get past that, it’s hard to deny that the movie is on the right side. People laud George Romero for having a black hero in NIGHT OF THE LIVING DEAD. This came out two years earlier and has numerous black actors, an explicit anti-segregation, pro inter-racial relationship/friendship message, a positive portrayal of civil rights activism and legislation, and a rage against bigotry. I mean, it’s no NIGHT OF THE LIVING DEAD. Not even close. It’s a sloppy drive-in movie with some crude dialogue and acting. But it also had something to say.

And it was current. The opening few scenes alone reference the Civil Rights Act of 1964 and the Watts riots of 1965, as well as alluding to the the 1963 bombing of the 16th Street Baptist Church in Birmingham. Not all that different from Lee connecting his story to the deadly white supremacist rally in Charlottesville.

Unlike in BLACKkKLANSMAN, the police here can’t go undercover in the Klan, because they’re already members in good standing. So Jerry gains the trust of local Grand Wizard Rock (Harry Lovejoy, THE FARMER’S OTHER DAUGHTER) by convincing him he plans to open up an L.A. chapter of the Klan. As an extra fuck-you he dates Rock’s blonde daughter Carol Anne (Maureen Gaffney, HAWAIIAN THIGH), who is not rebellious, she’s just as racist as her old man.

Jerry’s white girlfriend from L.A. and his black saxophonist friend Lonnie (the first role for veteran supporting player James McEachin, EVERY WHICH WAY BUT LOOSE, SUDDEN IMPACT, Perry Mason) come into town for the funeral without knowing what Jerry is up to. There’s some tension about them getting a hotel room together, and their presence raises suspicions no matter what part of town they go into.

Max Julien, a legend to me because of starring THE MACK and writing CLEOPATRA JONES, has a showy supporting role as a guy brought in from Harlem to give a pep talk to the local black men about how to stand up for themselves. Specifically the men – they ask the two women in the bar to leave before it happens. At first I thought he was some kind of militant activist, but he turns out to be a gangster. His plan is rejected by the locals, but he sticks around and becomes both a secondary antagonist and a victim of the Klan.

One parallel to BLACKkKLANSMAN is that at the end Jerry takes great joy in revealing to the Grand Wizard that he was outsmarted by a black man. Jerry has Rock at gunpoint, gives him a speech and dramatically pulls his wig off. (It turns out the “Squire Permanent Hair For Men” establishment he was seen leaving is actually a toupee store, not a hair straightening place.) 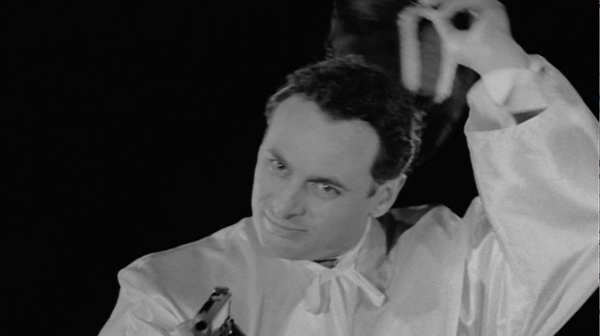 I gotta tell you, the ending is weird. The Klan are about to hang Max Julien and his henchman and kill Jerry’s friends. Jerry frees his friends, chases all of the Klan except the leader away with a gun and does his big reveal. Meanwhile, Julien and his friend are still in nooses, not scared but giving this look like “Come on buddy, can you hurry up and get us down from here?” Jerry commands Rock to get them down, but instead the asshole kicks the chair out, runs for the truck, hits Jerry, backs up and runs over Jerry’s hand.  Sure, Jerry manages to shoot him, but those two men just got murdered, and that doesn’t seem to be weighing too heavily on him during the scene where he tells his girlfriend he’s not going back to L.A. as their bodies are being taken away. 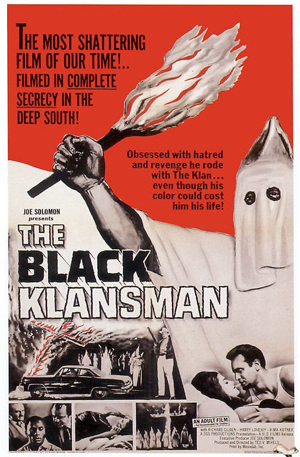 The movie begins with a theme song by Tony Harris that says “The Ku Klux Klan killed my little girl / Now I’m all alone in this hostile world,” and it ends with an anti-segregation quote from John F. Kennedy. Its heart is in the right place. I didn’t expect this from a guy who makes sexy farmer’s daughter movies.

The Code Red DVD has a Mikels commentary track. He tells a story about how the Bakersfield Highway Patrol came across them filming a Klan rally and tried to break it up, but understood that it wasn’t real when they were shown that most of the extras under the hoods were black. Hey wait a minute, the poster says this was “FILMED IN COMPLETE SECRECY IN THE DEEP SOUTH!”

There’s also an interview featurette with Gilden, who doesn’t seem to think it’s that weird that he played a black character. He says he was “olive skinned” and tells a story about being rejected both as “a little too dark” and “not quite dark enough” to play Egyptian in THE TEN COMMANDMENTS. He doesn’t point this out, but he also got many jobs playing Indians in the movie BLOOD ARROW and on TV shows including The Adventures of Rin Tin Tin, My Favorite Martian, Gunsmoke and Death Valley Days. IMDb says he played “Arab Student” in ESCAPE FROM ZAHRAIN. In those days I’m sure they didn’t think anything of it. You took the jobs you could get.

There’s also an extra listed called “A documentary on white people who act black,” but when you click on it it says “We licensed this documentary but the rights owner changed his mind even with a valid contract he chose to not lend us his master tape. The Director has a vision of submitting this short for the oscars.” Some drama and passive aggression going on in the fringe home video business I guess.

It is, of course, pathetic that this is a clunky disposable torn-from-the-headlines quickie made over 50 years ago, and yet it’s kind of relevant to today. How the fuck are we not rid of these dumb assholes who don’t believe in freedom and equality for all? Just like in the movie we have people in cities who are more used to living and working with different types of people and see it as a good thing, and then some areas where they try to stick with the old ways. And we have these semi-secret organizations of racist thugs. And some of them working as police and abusing their authority. And there’s this backlash toward the oppressed who stand up for their rights. I guess as the majority of civilized people continue to work toward a fair society, there will always be these pockets of weirdos who feel threatened by it.

I’m afraid BLACK KLANSMAN is not entertaining enough for me to recommend, but I do think it’s interesting that it exists. I’m sure there were people wanting Mikels to keep his politics out of his movies. How ’bout instead you keep your racism out of my country, asshole?

Harry Lovejoy Jmes McEachin Ku Klux Klan Max Julien Richard Gilden Ted V. Mikels
This entry was posted on Tuesday, November 6th, 2018 at 11:59 am and is filed under Drama, Reviews, Thriller. You can follow any responses to this entry through the RSS 2.0 feed. You can skip to the end and leave a response. Pinging is currently not allowed.