In the 1994 sports ‘n action drama PENTATHLON, Mr. Dolph Lundgren plays Eric Brogar, an East German athlete trained since childhood to be the ultimate pentathlon competitor. David Soul (Hutch from ‘Starsky & Hutch’!) plays the authoritarian (later revealed to be Neo-Nazi) coach Heinrich Müller, who slaps little Eric around and drills him to believe that if he trips on a rock or something he’s “failed the German Democratic Republic,” as well as himself and all his friends. I mean, this coach is such an asshole that you know he’s not even gonna be the kind of asshole that turns out to be lovable at the end like James Earl Jones in BEST OF THE BEST. 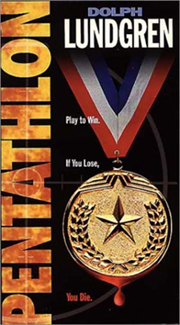 By the time of the ’88 Olympics in Seoul, it’s clear that Eric is itching for a little of the ol’ freedom. He gets a crush on an American Olympian (Renee Coleman), manages to score a Team USA windbreaker, and teaches himself to say “Hey dude, what’s shakin’, man?” so he can sneak into their compound. He seems like a big silly goofball, but the fuckin Stazi who keep an eye on him aren’t laughing. Müller turns blatantly racist, freaking out on an African-American athlete for no reason and saying “You will speak when you are spoken to!” He also says “You embody the purity and the power of Germany!” and “I am your future, Eric!” which means he himself embodies the purity and power of Germany. He takes winning very seriously, but Eric takes fairness very seriously, and refuses to take steroids to win.

Eric wins the gold anyway, then excuses himself to the shitter. That would explain why he ran so fast in the race if he had to take a dump real bad, but that’s not it. The bathroom is his excuse to slip into the USA uniform and make a run for it. It would be better if he made a run, swim, horse ride, shoot and swordfight for it, but I’ll take what I can get. To me his plan comes off like a youthful prank, but the Stazi disagree and actually fire bullets at him. He gets the American bus to pick him up and for some reason the driver is willing to drag the guy who’s chasing him. You’d think that would turn into an international incident.

Well, Eric successfully defects to the States, and that oughta be the happy ending to the story of Olympic gold medalist Eric Brogar and his asshole coach Heinrich Müller. But those two have been through too much together. They’re connected now. Back in Germany, a destitute Müller shows up at Eric’s dad’s house, steals a photo of Eric and beats the dad (to death?). In Los Angeles we find Eric drunk and depressed in a bar, watching the wall come down on the news and turning violent against the American bar patrons who don’t understand what it means to him. Just his shitty luck that he lost everything to defect and could’ve just stuck it out a little longer.

He’s flipping burgers in a little diner, working for an older guy named Creese (Roger Mosley), who regrets even hiring Eric until he teaches him to smile and laugh. About damn time too, the guy was getting insufferable, and had a bad habit of completely ignoring people who say “How ya doin’?” or “good morning” or “buenos dias” to him. But when Creese finds out about Eric’s Olympic past he decides to help him get back into shape, teaching him not to smoke while jogging, etc.

Of course Müller shows up again and gets a big idea for a Neo-Nazi attack on some kind of Holocaust memorial rally and making Eric take the fall for it, so there is fighting and what not.

This is a pretty cool action premise, because as it explains in text at the beginning the pentathlon was designed to use the skills that a soldier needs. So of course in battling Müller and his men Eric ends up using his running, his shooting and his sword skills. I don’t think he swims or rides a horse though, which is wasted potential, but otherwise this is a very satisfying movie.

It also takes advantage of Dolph’s qualities, because as a huge, muscular, blond, square-jawed super hero it makes perfect sense that he’d be some Nazi asshole’s ideal specimen. He even says, “the idea of the superman was born in Germany” (when explaining why he plans to jump out a window). It’s not one of his monosyllabic meathead characters, he gets to use his humor. He does start out with broken English and fake German accent, but switches to regular Dolph when he becomes American.

PENTATHLON is the last movie by director Bruce Malmuth, who had previously done NIGHTHAWKS with Stallone and of course HARD TO KILL with Seagal. According to his IMDb biography, Malmuth was “a single parent who raised his son from the age of six” and was passionate about doing workshops at orphanages and stuff like that, believing “it is easier to build a child than to repair a man.” In my Seagalogical studies I thought this life experience might’ve influenced the relationship between Mason Storm’s son and his adopted father, and I definitely think it influenced PENTATHLON, which Malmuth is credited as writing along with William Stadiem, Gary T. McDonald and Gary DeVore (RAW DEAL).

There’s some cool action here and there, but not a huge amount of it. In that department it’s only average for an action movie of 1994. But in my opinion the relationships and several other unusual touches make PENTATHLON stand out as something special. Eric is this German Superman with three different proud papas trying to claim him as their son. There’s his real father, a good man but he was taken away like a little buddha or a jedi padawan. There’s his Nazi coach who mentally and phsyically abuses him his whole life, but clearly has a “that’s my boy!” pride for Eric. And there’s Creese, the anti-Müller, a humble working man who not coincidentally is of one of the races that Müller is bigoted against.

At the end, after Müller has escaped capture, common sense would tell him to go back to Germany and lay low. Instead he shows up at Eric’s next pentathlon wearing a filthy Adidas jacket with no shirt underneath, trying to disguise himself with sunglasses. He’s there to assassinate Eric as he crosses the finish line, but I swear he’s also there to see his boy win the race. Even as he points the gun the look on his face isn’t anger or hatred, I think it’s pride and love: 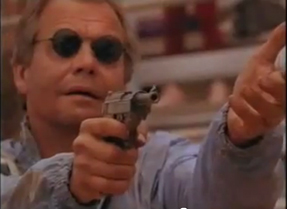 But of course Eric turns the tables and Müller’s the one who gets shot. And the movie ends on Eric’s face. Fittingly his look isn’t love. I think it’s something more like indifference: 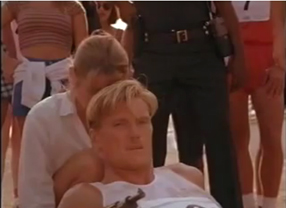 And there are plenty of other nice splashes of flavor. During the traditional alley-mugging incident the lead creep is for some reason climbing on a wall monkey-style. There’s a reverse Radio Raheem incident where a white villain blasts a boombox (and does a hilarious dance) in a black-owned establishment. When the Nazis beat up one of Creese’s old buddies one of them angrily yells, “You fuckin killed Germans!?,” so the old man must be a WWII vet. Doesn’t make you sympathize with these assholes, but makes them a little more human.

I like that the lead villain is ultimately pathetic. In his big moment when he tries to broadcast a taped speech he loses the signal in the control room and nervously freaks out, not sure if his plan is working or not.

And unless I misunderstood something there’s a real clever moment when the Nazis are sneaking into the rally disguised as a TV crew. A cop on security detail is hassling them about their equipment. When asked they open a case, clearly showing their rocket launcher. “See? Microphone,” one of them says, and the cop just lets it pass. It’s weird but I believe it. He doesn’t really know what he’s looking at.

I swear there’s almost a subtext going on with the footwear, too. The Germans all wear Adidas shoes and clothes. Adidas is a German company, and in fact its founder Adi Dassler was a member of the Nazi party (although unlike Müller he didn’t support Hitler, was cleared of any wrongdoing and proven to have sheltered potential victims and soldiers from the war). When Creese takes Eric under his wing he buys them both brand new Asics and they put them on together. But Asics is a Japanese company. I wish it was Converse or something so it would be more symbolic of Eric becoming an American.

(fuckin Nazis get the better shoes, though.)

Man, it kind of blows my mind that Starsky went on to direct THE RUNNING MAN and Hutch went on to play a Nazi trying to shoot Dolph Lundgren out of fatherly love. You know what they say: it’s a world of laughter, a world of tears.

Anyway, PENTATHLON is a real good one, very unique and easily one of Dolph’s best. I highly recommend it, although it doesn’t have a region 1 DVD. 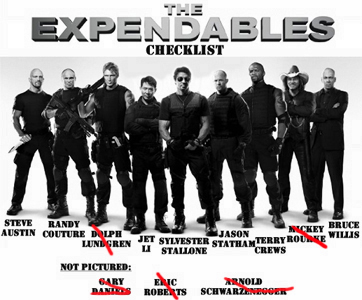 Bruce Malmuth Countdown to The Expendables David Soul Dolph Lundgren Olympics VHS
This entry was posted on Thursday, August 5th, 2010 at 2:38 am and is filed under Action, Reviews, Sport. You can follow any responses to this entry through the RSS 2.0 feed. You can leave a response, or trackback from your own site.