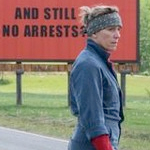 I probly don’t need to tell you that this creates some tension in town. Chief Willoughby (Woody Harrelson, SEVEN POUNDS, SEVEN PSYCHOPATHS, TRIPLE 9, THE EDGE OF SEVENTEEN, 2012) tries to reason with her politely about taking it down. His deputy Dixon (Sam Rockwell, TEENAGE MUTANT NINJA TURTLES), who is locally infamous for an unexplained incident involving the torture of a black man, is not as cool-headed about it, and threatens poor Red Welby (Caleb Landry Jones, GET OUT) at the billboard company. The woman’s son Robbie (Lucas Hedges, MANCHESTER BY THE SEA) is traumatized and hurt by the graphic details of the murder he had previously avoided knowing. Her ex-husband Charlie (John Hawkes, STEEL), a domestic abuser and a cop, is embarrassed by it and doesn’t think it helps anything.

But she stubbornly persists. More than anything the movie is a tribute to the greatness of Frances McDormand (DARKMAN), who plays this character, Mildred Hayes. Her mourning status gives her license for a BAD SANTA type campaign of assholery, cursing, assaulting and not giving a fuck all over town. She’s a tough lady who even though she runs a gift shop for a living wears coveralls, has a macho posture and part of her hair shaved. She’s on the warpath – she takes “burn it all down” literally, by the way – but she has a big heart. When, in the middle of a confrontation, the chief suddenly coughs blood on her face, she instantly drops the fight and comforts him, even calling him “baby” in a motherly sort of way. 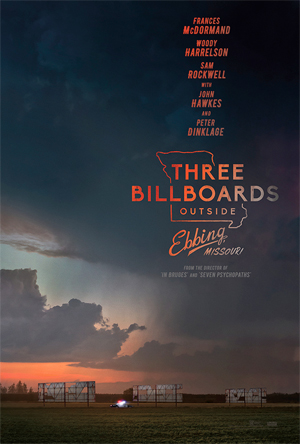 McDormand could’ve turned this into a tear and snot drenched Oscar reel if she’d wanted to, but apparently she resisted that for this character, choosing instead a more interesting repressed grief covered with shit-stirring wrath.

And it’s another great role for Harrelson, whose character has to face this case, this controversy and a terminal disease simultaneously. Since the chief is the one she singles out on the billboard you expect him to be an antagonist, but he’s the most understanding about the whole situation. He’s more hurt than anything. And though he wants her to take them down he also tries to stop Dixon from harassing her, and is lenient about the things she does, which sometimes constitute serious crimes. And he has a bond with her that goes beyond death.

It leans harder on the tragedy than on the comedy, but there are some big laughs, and they come out of nowhere sometimes. The feeling of inappropriateness only makes them stronger. We feel the catharsis of Mildred’s rampage, but also the weight of her guilt for its unintended consequences, and for her equally messy parenting choices. It’s an unsettling and emotionally harrowing experience, mostly in the ways intended, but I think also in others.

McDonagh has a gift for characters who do horrible things but are still funny and kind of charming, a little sad, a little sympathetic. People, and life, are complicated. It’s both troubling and novel to hear that Charlie was abusive, and then see him put his hands on Mildred’s neck, but also have him be kind of right in some of their arguments, and have moments where he seems okay, like he’s genuinely trying for them to get along as divorced parents. He does end things on an asshole note, which is a relief. Anything else would feel like a lie, because I can’t not worry for his young girlfriend Penelope (Samara Weaving, MONSTER TRUCKS). We only see him being nice to her, but I don’t trust it.

Chief Willoughby is one of the most likable characters, but how much of a good guy is he really? This is a movie that delights in making you squirm by using the N, C, F and R words and repeatedly calling Peter Dinklage a “midget,” yet for me the most uncomfortable line was the first, slur-free part of the chief saying, “You got rid of every cop with vaguely racist leanings, you’d have three cops left and all of them would hate the fags.” It feels like a throwaway joke, and Harrelson makes it funny, but man, it cuts deep. We’re trying to get behind this chief of police, but he may really believe it’s not worth trying to remove bigots from the police because they would lose too many guys. Not to mention he’s downplaying what Dixon apparently did as only vaguely racist.

(Speaking of “vaguely racist,” Mildred, I know you’re only using the n-word to tauntingly implicate Dixon as a bigot, but let’s not be using that loophole.)

This is my one issue with a very interesting movie. Starting with Mildred saying “It seems to me the police department is too busy torturin’ black folks to solve actual crime,” it takes on systemic racism in policing as one of its main themes. Therefore, (SPOILER) I think it’s being much too easy on Dixon when he  goes out of his way to try to solve the case and bring Mildred some closure, thereby proving his worth as a cop and giving him some sense of redemption. It works as a story, as a character evolution, but not as subtext, as symbolism. I don’t think two white people are able to decide this matter is settled. You tried to help me catch a killer, so I absolve you of your racism. It doesn’t work that way.

McDonagh’s work proves that it’s easier to laugh about hitmen taking life lightly than police officers. I only know hitmen from movies, and I don’t have high hopes for them. Police officers I see everyday, and society counts on them. When they’re assholes it’s bad for everyone.

I do like that all of the white people in the movie, especially the heroine, are wackos getting into crazy fights all the time, while the three black characters are the normal people having to witness all this shit. There’s a great moment when (SPOILER) Dixon finishes the outrageous assault of an innocent citizen, and walks right past a man watching the whole thing from the sidewalk, and you see that it’s Clarke Peters (RED HOOK SUMMER, JOHN WICK), and that he has a badge on his hip, and then it turns out he’s the brand new interim police chief. You get to watch these fuckos on the force exhibit at least a tiny bit of shame and self awareness about their shittiness now that there’s finally an authority figure who will draw a line. We can hope he’s able to enforce a strikingly different “vaguely racist leanings” policy than the last guy.

Abbie Cornish Caleb Landry Jones Clarke Peters Frances McDormand John Hawkes Lucas Hedges Martin McDonagh Peter Dinklage Sam Rockwell Samara Weaving Woody Harrelson
This entry was posted on Monday, December 11th, 2017 at 11:46 am and is filed under Comedy/Laffs, Drama, Reviews. You can follow any responses to this entry through the RSS 2.0 feed. You can skip to the end and leave a response. Pinging is currently not allowed.