Assassination of a High School President

In ASSASSINATION OF A HIGH SCHOOL PRESIDENT Bruce plays Kirkpatrick, a grizzled Gulf War vet turned private high school principal who must use his elite combat skills and overcome great odds to retake the school when it comes under siege by an army of guerillas intent on murdering the student body president because they don’t like the theme for the homecoming dance.

That’s not true. I made up everything after the word “principal.” Bruce does play the principal and he does always talk about Iraq. He could almost be the same character from PLANET TERROR. He’s a hostile disciplinarian who’s driven into a fury when students chew gum. He also leads the school in a singalong of a patriotic song he wrote. But it’s not an action movie and he’s not the star. 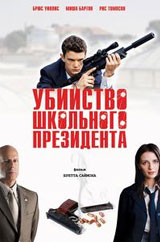 This is one of those movies like BRICK where they take a typical adult story and recreate it in a teenage world. Isn’t it cute what teens do? They’re just like people only little. Technically this one’s probly not as good as BRICK, but personally I found it a little easier to swallow because the hero is kind of a friendly dork and the tone is lighter, so I didn’t feel pushed to take it all seriously.

(See, that’s the assassination. It’s a metaphor. I wasn’t sure going in but I in retrospect it would be weird if the school president actually got his head blown off and some kid had to figure out who did it. Because that seems like more of a police matter. I guess in that movie the debate team would be the Warren Commission.)

They have a detention room that’s treated like a prison or an insane asylum, and he even gets to go in to question an inmate – it’s that kind of stuff. He follows somebody and spies on them for clues while taking his driver’s license test. I thought that was pretty clever.

Thompson is a likable protagonist, Mischa Barton (from a television program that the youths watch, I imagine) fits in well as the unobtainable (but somehow obtained) girlfriend of the president, sort of the femme fatale even though I said this wasn’t a noir. Bruce is good of course, though obviously I prefer roles where he gets to use his humor and charisma. He’s got those on the shelf lately I guess, recharging.

THE ASSASSINATION OF A HIGH SCHOOL PRESIDENT was directed by some guy and written by two production assistants from SOUTH PARK. It’s a perfectly decent sold-at-a-film-festival type of indie movie – you know the type. You read about it on the internet and some people who saw it first act like it’s one of the best movies ever, and then everybody forgets about it the next day. A year later you catch it on DVD or cable and it’s fine. I wouldn’t necessarily tell you to watch it, but from a Bruce completist perspective it’s pretty decent.

back to school Bruce Bruce Willis
This entry was posted on Wednesday, September 30th, 2009 at 10:55 pm and is filed under Bruce, Comedy/Laffs, Reviews. You can follow any responses to this entry through the RSS 2.0 feed. You can skip to the end and leave a response. Pinging is currently not allowed.

7 Responses to “Assassination of a High School President”