Seven strangers. One man connects them. Or some stupid bullshit like that, is what the commercials said. They had a hard time explaining what the hell this movie was supposed to be about, and didn’t make me curious to find out. That is, until somebody gave away the ending.

Whether or not you go in knowing the ending like I did, you’re pretty much just thrown in there without an explanation of what’s going on, and it takes its sweet time getting to solid ground where you feel like you’ve got your footing in the story. Smith is on the phone with a blind meat salesman (Woody Harrelson) chewing him out for no good reason, trying to pick a fight with him. Why is Will Smith being such an asshole? And what is he babbling about when he gets off the phone? He starts yelling out a list of names and knocking over furniture. The guy is obviously traumatized. 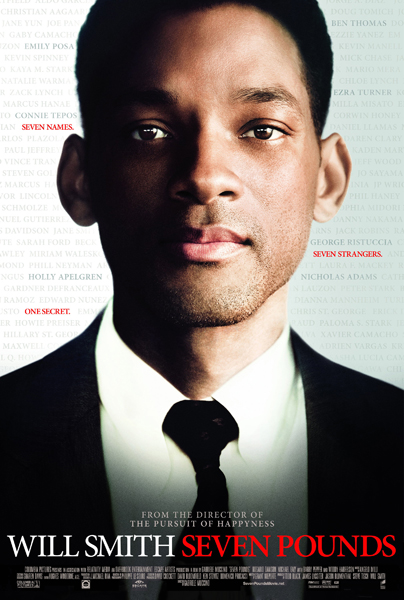 We see some glimpses of his past. He had a wife or girlfriend, apparently not with him anymore. He was rich, now he’s in a dingy hotel. He was the head of an astronautics corporation. Now he’s going around saying he’s an IRS agent, talking to various people in debt because of health problems, butting into their lives.

Honestly I went in thinking this movie was gonna be Nic-Cage-ludicrous and I was gonna get some laughs out of it, but it quickly defeated me. Even though I had heard pretty much what he was gonna be up to, all this careful of withholding of information was successful at creeping me out. Is he really an IRS agent now, or is he making this shit up? He seems like he’s stalking these people. You and I both know Will Smith is not playing a crazy stalker, he’s obviously gonna try to help these people. But then he’s telling Rosario Dawson that he’s cutting her a break on the money she owes to the government, and we suspect he doesn’t really have a say in that. What is the dude up to?

And he seems so miserable. He’s going around doing these incredibly nice things for strangers but then all the sudden he’ll turn harsh and upset them. He might turn out to be some kind of angel or some shit, but not the cuddly kind.

You ever been to a movie where some annoying person keeps asking their boyfriend or girlfriend questions the movie purposely hasn’t answered yet: why is he doing that? Where is he going? What is he trying to do? And you want to tell them for God’s sake, it will answer the question when it’s time to answer it, your boyfriend doesn’t know either because he is not in the future, he’s watching at the same time you are, and to be honest we’re mad at him for not telling you to shut your dumb mouth? Well this would be the all time worst movie to see with one of those people in the theater. And I guarantee you it happened somewhere. Anybody out there who suffered through that, I feel for you.

It’s an unusual movie and a real ballsy one for somebody like Smith to make. While it gets most of its mileage from making you wait to find out what exactly he’s up to it also takes a left turn and becomes a love story with Rosario Dawson, who has a good chemistry with Smith and seems genuinely charmed by him. He falls in love with this girl who’s fighting to live past her life expectancy, and if she does she wants to be with him. But she doesn’t know that he’s been hinting he’s gonna die and that he gave away his house to a stranger. This could get ugly.

It’s the same guy who did THE PURSUIT OF HAPPYNESS, and it’s similarly well directed. That one was a very effective crowdpleaser type movie but I still had that nagging feeling that it was bullshit, telling us that a dude should raise his kid in a subway bathroom so he can have a shot at becoming a millionaire investment banker. SEVEN POUNDS has more selfless motives than that. The cynic in me still felt like kind of a chump getting choked up for the love story, but then it really got me with the last scene. And this is a bigger spoiler than the last one:

Smith has sacrificed himself to save Rosario from her heart condition. She has his heart now and she’s recovered nicely. Some time later she comes to some kind of a children’s music recital. Woody Harrelson is the teacher. We have long since figured out that Will was gonna donate his eyes so Woody could see again. But what I didn’t see coming was Rosario walking up to him and staring lovingly into his eyes… Will Smith’s eyes, transplanted into Woody’s head.

That last scene is such a weird combination of romantic, tragic, and disgusting. I’ve never seen anything like it. If you ask me that’s a brilliant ending. Never occurred to me I’d see something like that. I’m sure many people will laugh this one off like I expected to, but it worked for me.

And here’s something stupid to think about: SEVEN POUNDS is the anti-SAW. SAW is about a brilliant engineer who feels he got fucked over, so he tries to get his revenge on humanity. SEVEN POUNDS is about a brilliant engineer who knows he fucked up, so he tries to redeem himself by helping humanity. The guy in SAW concocts elaborate schemes to prove people are immoral so he can kill them, the guy in SEVEN POUNDS concocts elaborate schemes to prove people’s morality so he can reward them. In SAW they get tortured by convoluted Rube Goldberg type machines, in SEVEN POUNDS he pulls a maneuver like that on himself. In the SAW movies he’s dying of cancer and can’t stop it, in SEVEN POUNDS he ought to live but wants to kill himself. The guy in SAW is a real prick who thinks he’s better than everybody else, the guy in SEVEN POUNDS is a charmer who hates himself. And I’m sure one of the SAW movies must’ve had some reference to “seven pounds of flesh,” but I can’t remember for sure. Plus they both start with the letter ‘S’.

I guess we’ll just have to see if they put out a SEVEN POUNDS movie once a year for the next half a decade, but so far I like this series better than SAW.

Will Smith
This entry was posted on Tuesday, March 31st, 2009 at 11:24 pm and is filed under Drama, Reviews. You can follow any responses to this entry through the RSS 2.0 feed. You can skip to the end and leave a response. Pinging is currently not allowed.