Anyway what this BAD SANTA one is about is Billy Bob Thornton is a character called Willie, a self loathing alcoholic safecracker who every year gets a job as a department store Santa. His partner Marcus (Tony Cox from FRIDAY) is a dwarf who is his elf. Then after closing time on christmas eve Marcus will be disguised as a snowman decoration or something, he runs and turns the alarm off and they rob the place. 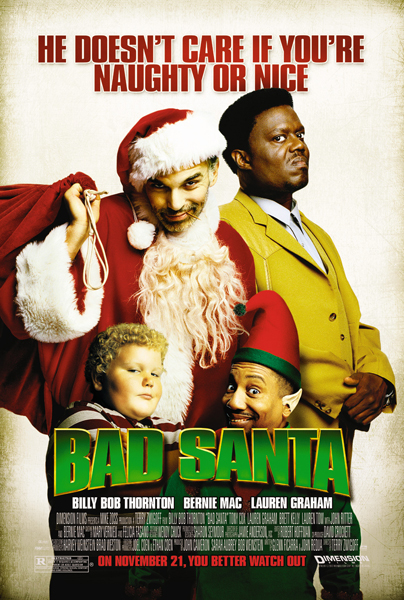 The robberies seem to go pretty easy but the tough part is in the lead up to the robbery, the actual Santa part. Having to get his picture taken with a bunch of kids on his lap. This is hard because he hates everybody (especially kids, himself, and his boss, John Ritter), he is always drunk, he has no social skills, he says fuck more than I do, he often pisses himself, etc.

Now I could imagine a movie with this premise but it pulls its punches, it tries to make the bad santa charmingly mischeivous, and then he learns his lesson at the end. This is not that movie. This is a movie with a heart, but it’s a dark, cruel, dried out heart with thorns on it. This is a character who swears at kids, goes to bars in his Santa costume, takes his beard off in front of kids, passes out while kids are waiting, etc. In one scene a kid sneezes chocolate ice cream cone onto his face and he spends the rest of the day looking like he was dragged face first through mud and doesn’t give a fuck.

This character is so mean and low that he does not have to be redeemed at the end. He just makes one small gesture of friendship, and in the context of the story, for me it is sweet and moving. His heart doesn’t have to grow 3 sizes. Because it’s a small gesture, that makes it seem more sincere. This guy really is a huge fucking asshole, so the fact that he makes one measly bit of effort is a big fuckin deal. A normal guy, you would expect to be nice to somebody. But this guy? Give him a fucking trophy he does something for somebody other than himself. Good job bad santa.

The heart of the movie is in Willie’s relationship with this fat kid, who is called “kid” for most of the movie. Not only does Willie not call him by his name, it doesn’t even occur to him that he has a name until 2/3 into the movie when he reads it on his report card, then gets confused. The kid is introduced getting off the bus with snot all over his face, pretending not to notice the bully skateboarder kids calling him a fag and pegging him in the head with cans. He comes into the mall and talks to Santa, who does not treat him any nicer than the kids did. Then for some reason he creepily follows Santa around all day.

If the wrong kid had been cast in this role, it would’ve ruined the movie. But this is the perfect kid. You look at this weirdo kid, you got no clue what he is thinking or feeling. All you know is he lives alone with his grandma, he’s obsessed with sandwiches, and he believes his dad is “having an adventure in the mountains.” There is also one mention of a talking walnut but I don’t even have a clue what that’s about. This kid is not cute or perky or sassy. He is a complete blank. It makes me laugh just thinking about him.

When Santa brings the kid home and decides to rob his house, it’s so easy that he seems almost disgusted by it. Then he moves in for a while.

The other main characters are John Ritter in his last role, the uptight mall manager who tries to be sensitive about disciplining Willie when he catches him cornholing a fat lady in the big & tall dressing room, yelling “You ain’t gonna shit right for a month!” Also Bernie Mac as an intense mall security chief. Like pretty much all of his movie roles, you don’t get to see him quite as much as you want to, but this one takes advantage of his talents in a subtle way. He doesn’t get alot of jokes but he gets to be both funny and menacing and it’s mostly in his gestures and facial expressions.

Also the older Gilmore Girl is the love interest, who seems a little too wholesome for the movie but she is interested in Willie because she has a fantasy about fucking Santa. It’s not really believable that this guy would be able to charm her. I mean if this was real, he would probaly smell like piss and bad aftershave. And he would probaly get pissed off when he’s drunk (i.e. always) and hit her or at least say some stupid shit to her and scare her off. There’s no way their relationship would work out as well as it does. But luckily this movie doesn’t try to get serious or get too deep into the love story so you can just pretend not to notice that.

There is one scene that involves three different characters getting punched in the balls, but I feel I can still say this is not that kind of comedy. This is the kind of comedy where Billy Bob gets real drunk and ends up eating all the chocolates from the kids advent calendar. But then the next day the kid cuts his hand real bad so Willie feels bad and he tapes the advent calendar back together, but all he can find to put inside it is candy corn and aspirin. Also there’s a real funny scene where Billy Bob almost suffocates himself in the garage but decides not to. Merry Christmas, America.

The movie is directed by Terry Zwigoff (CRUMB, GHOST WORLD). The script is by just some dudes but they based it on a story by the Coen brothers, whose humor comes through in some of the narration and what not. This is a movie that is not for everybody, or most people. Alot of people will think it’s too dark, too mean, too repetitive in its constant abuse of human decency, common courtesy and civil discourse. To me though it’s funny as hell. It’s like the funny Christmas version of BAD LIEUTENANT.

Bernie Mac Billy Bob Thornton Christmas Christmas crime Coen Brothers John Ritter Lauren Graham Terry Zwigoff Tony Cox
This entry was posted on Monday, December 26th, 2005 at 1:54 pm and is filed under Comedy/Laffs, Crime, Reviews. You can follow any responses to this entry through the RSS 2.0 feed. You can skip to the end and leave a response. Pinging is currently not allowed.