In the opening, a quick clip montage (as was the style in those days) and Charley’s narration recap what happened in the first film, only for him to then say that he imagined most of it. Yes, Jerry Dandridge was a serial killer, but “vampires aren’t real.” Charley says he’s returning to “the real world” after three years so I thought he’d been hospitalized, but I guess he just means he’s mentally returning to a world where monsters don’t exist. He says he’s worried he’ll run into Peter Vincent, which is weird because in the next scene he goes to visit him.

Peter’s show Fright Night is back on the air, which made me realize that I’m not sure how the events of part 1 led to him having the show again in the epilogue. But that’s okay. He now lives in a big gothic looking matte painting of an apartment building, and this time it’s him who has a vampire as a neighbor. I thought it was a good joke that both goth vampires and corny horror stars would be attracted to this building, but we find out later that she deliberately came there to find them.

I like that these vampires are some kind of New Wave or art world hipsters, or “bohemians” as one character calls them. When Charley sees them walk across the building lobby to the elevator he literally sits up straight and stares at them like “oh jesus I stopped believing in vampires but look at these fucking people.” 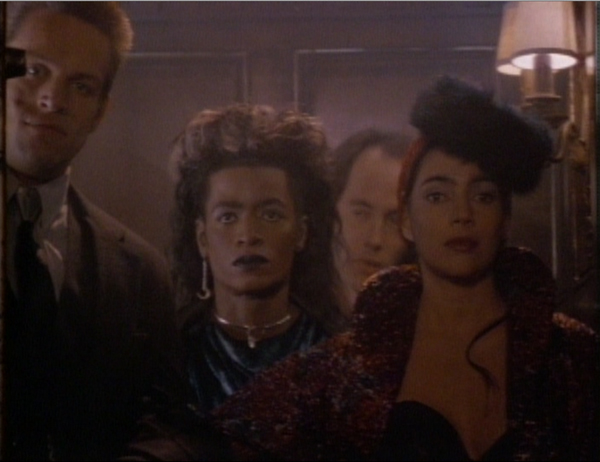 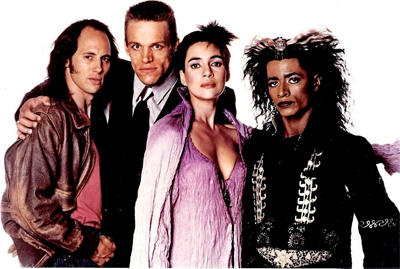 The lead vamp is Regine (Julie Carmen, GLORIA, IN THE MOUTH OF MADNESS), who stalks and seduces Charley. After he first spots her he makes out with his girlfriend in a car, not knowing that Regine is on top of the car posing sexy and that’s what causes him to get too rough. Then he has a dream about her – OR IS IT!? – and later seems to be exhibiting symptoms of vampirism. Regine looks like she could date Prince, so it’s funny to see her aggressively moving on this nervous dork in a bathrobe.

(Note: Charley’s college apartment does not have car posters, now he does have movie posters, including WOMEN’S PRISON, TEENAGE CAVEMAN, PUSHOVER and SEX KITTENS GO TO COLLEGE. Also I’m pretty sure there’s a magazine pinup of Predator, but I can’t tell what this other thing is beneath it.)

Like Jerry before her, Regine makes a big scene dancing seductively and vamping out on a dance floor, but then she plays it off as fake – everyone at the party knows she’s a famous performance artist. Peter thinks she’s “Astonishing! Absolutely astonishing!” until she replaces him as the host of Fright Night. The show’s producers are shown as sleazy Hollywood assholes who don’t get it. You can tell it’s a biting satire of Hollywood because Peter gets called “babe.” But let’s be fair, aren’t they kind of edgy if they hire a performance artist for this local horror host gig? Bad idea, but daring. They’re playing weird music and she’s doing modern dance in a bunch of fog, rubbing blood on her face. You can’t accuse them of pandering. 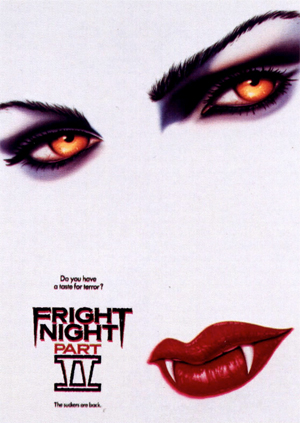 Because of the scene she runs in, one member of Regine’s entourage is way over-the-top in the fashion department, the androgynous Belle (Russell Clark, BODY ROCK). I was gonna say he looks like he could be a backup dancer for Michael Jackson, and in fact it turns out he’s a choreographer, including for this movie and for the earlier New Wave vampires movie VAMP with Grace Jones. Anyway Belle is funny because he charges his victims on rollerskates. I actually think the movie could use more weirdo shit like that, and maybe a hip soundtrack. Fangoria did think enough of these fashionable touches to compare the sequel to an episode of Miami Vice, but I think that’s a bit of an exaggeration. Hats off to the Nagel-inspired movie poster, though.

The most enjoyable character is their token werewolf friend Louie (Jon Gries, MORE AMERICAN GRAFFITI, TAKEN 1-3), who gets close to Charley’s new girlfriend Alex (Traci Lind, SURVIVAL QUEST, CLASS OF 1999) but keeps failing to seal the deal because he’s kind of a dipshit. I think my favorite joke is when he’s climbing up a building and his intended victim, not even noticing him, slams the window down on his fingers, severing his claws so he falls and turns back into his human form. There’s another well-timed one where he turns and wolfs out to scare a dog without Alex seeing it. Also I like the recurring joke that he doesn’t kill somebody and the group’s bodyguard Bozworth (Brian Thompson, COBRA) deadpans “You’re supposed to bite her on the neck, asshole.” He seems like a Renfield type character, because he keeps casually eating bugs.

In a reverse of my memory of FRIGHT NIGHT, I remembered this not-very-successful-and-still-only-available-in-shitty-pan-and-scan-DVD-in-the-U.S. sequel as being kind of underrated. Not really. It has its moments of inspiration, but the remixing of part 1’s story isn’t enough to make up for the lack of freshness, and the new characters aren’t as good as the ones they’re replacing. Maybe part of the problem is that, according to Marc Shapiro’s August 1988 Fangoria cover story on the movie, Evil Ed was originally scripted to return, as teased in the end of part 1. But Stephen Geoffreys didn’t want to do the sequel, nor did Amanda Bearse, maybe because she was busy with Married.. with Children by then. So Gries has to fill the wacky-but-sinister hole and Lind has to do what she can with an Amy clone who suffers through Charley’s pattern of standing her up and begging forgiveness until she reads Dracula and decides to help. At least she does get to step up in the last act while Charley is in Amy’s hypnotized-prisoner role.

I bet the reason this was elevated in my mind is that the aforementioned Fangoria is the first one I bought, and I still have it, so I’ve had years to look at these monster pictures: 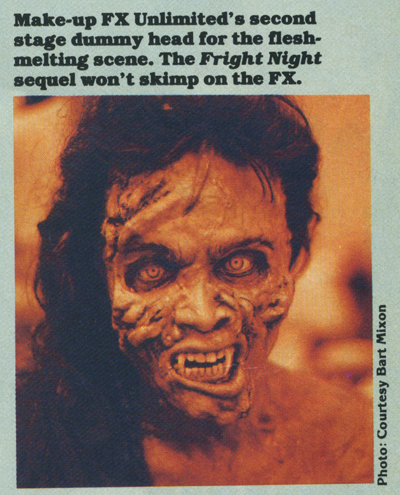 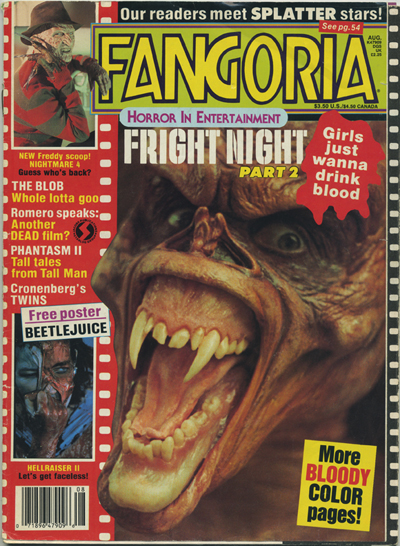 The funny thing is I didn’t even spot that stage of the transformation in the movie, and the awesome cover monster is only in a couple of shots. But the effects – including some makeup by Greg Cannom (VAMP, BRAM STOKER’S DRACULA, BLADE) – are definitely the highlight. After a pretty boring middle section, there’s a nice finale when all the villains get killed off in fun ways. I also like the twist that (SPOILER) Charley’s therapist Dr. Harrison (Ernie Sabella, voice of Pumbaa in THE LION KING) was a vampire the whole time, purposely feeding him bullshit.

Did I understand this right, though? When Bozworth gets slashed, his skin tears open, meal worms and beetles dump out and his body seems to deflate. Was he supposed to be a million bugs working together to control a human body? Oogie Boogie with skin?

The director is Tommy Lee Wallace (HALLOWEEN III: SEASON OF THE WITCH, IT, VAMPIRES: LOS MUERTOS) and he wrote it with Tim Metcalfe and Miguel Tejada-Flores, the team that did REVENGE OF THE NERDS. Yeah, I guess this is about right for that team.

Brian Thompson Greg Cannom Jon Gries Julie Carmen Mark Metcalfe Miguel-Tejada Flores Roddy McDowall Russell Clark Tommy Lee Wallace Traci Lind vampires werewolves William Ragsdale
This entry was posted on Friday, October 27th, 2017 at 12:08 pm and is filed under Horror, Reviews. You can follow any responses to this entry through the RSS 2.0 feed. You can skip to the end and leave a response. Pinging is currently not allowed.