This one taught me who Dolph Ziggler is. I’d heard the name and I always assumed he would be a tall Ivan Drago knockoff, but it turns out he’s just a longhair dude of standard WWE height and build. Here he ties his hair back to play Ray Thompson, Seattle undercover narcotics cop who is totally in trouble for how edgy and not by the book he is. For example he fake kills his asshole partner Kendricks (Josh Blacker, DRIVEN TO KILL, ELYSIUM) during a bust by shooting him in the vest. He saves his partner’s life and gets 200 guns off the streets, and it’s possible that this level of law enforcement awesomeness is actually just acting out due to the tragic death of his son. At least, that’s what we suspect when his wife finds him drinking a beer and reading bedtime stories in their son’s completely-untouched bedroom. 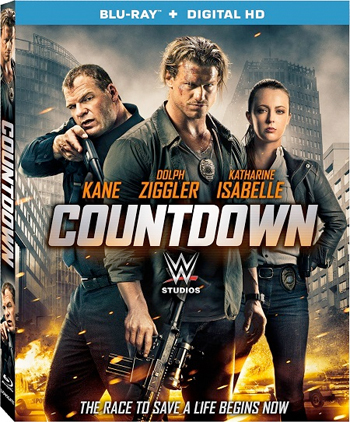 Ziggler is pretty likable, but the supporting cast of people who are uptight about his antics make the movie for me. Katharine Isabelle (GINGER SNAPS, CARRIE tv movie, SEE NO EVIL 2) plays Special Lieutenant Baker, who all the officers hate because she’s “appointed by the OPA to bring this department into compliance.” They insult each other and she suspends him with pay (oh to have a job where you get a free vacation for doing something wrong) while he’s under investigation for misconduct. His fed-up boss is Lieutenant Cronin, played by Kane. I only know Kane as the towering, bald, mute eyeball collector in the SEE NO EVIL movies, so it took me a minute to recognize him as this normal, no-nonsense working class guy. It turns out Kane is a very charismatic character actor, and then also when he stands up out of his desk he’s a giant who can pick a guy up by his neck and slam him against a wall.

In a situation we’ve seen a thousand times in movies before (because we’ve seen DIE HARD WITH A VENGEANCE a thousand times), Thompson gets dragged out of his suspended late afternoon hangover sleep because a terrorist specifically asked for him. But it’s not a Simon Says style puzzle, it’s just a ransom demand and a little boy shown on video with a bomb attached to him.

During the handoff the bomber ends up dead, but not before triggering a timer, so Thompson and Baker partner on an unauthorized rush around the city interrogating bikers and undocumented Russian immigrants trying to find the kid before he blows up. The two learn to like each other and understand each other’s methods, which mostly means Baker abandons her job of keeping officers accountable. She helps him Gino Felino a crowded bar just to get information about Russian tattoos that he probly could’ve looked up on the internet.

Lieutenant Cronin tries to do his job though and sends Kendricks to arrest Thompson (a job he accomplishes using mace). This is when the movie gets most exciting, because Thompson decides to fight his way out of police headquarters, having a fierce but trying-not-to-hurt-people-too-bad brawl with his fellow officers, including the one played by Kane. Which goes kinda like this: 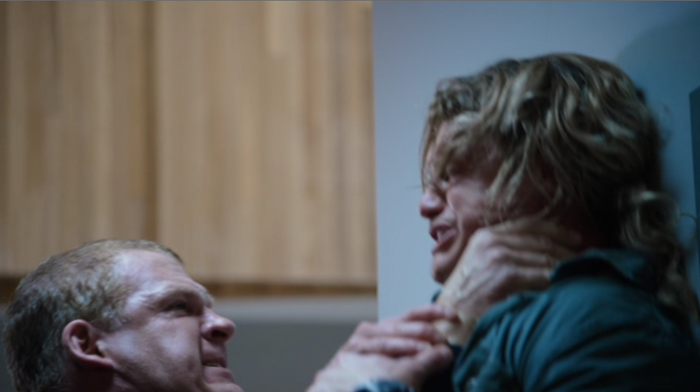 I’m surprised I haven’t seen another WWE Film that does this, but a major sequence happens in an arena during a wrestling event. So they’re able to work in a bunch of shots of famous wrestlers setting up, working out backstage, going to the ring, etc. More importantly Thompson chases a suspect backstage and some wrestler dude (Rusev?) lifting weights backstage sees him and thinks he’s a psycho or something. So the wrestler turns vigilante, breaking him through a wall, taking his gun and aiming it at him.

Thompson doesn’t have time to explain, so he fakes him out, kicks him, gets the gun back and runs. Then a female wrestler (Lana?) with a Boris & Natasha accent says… 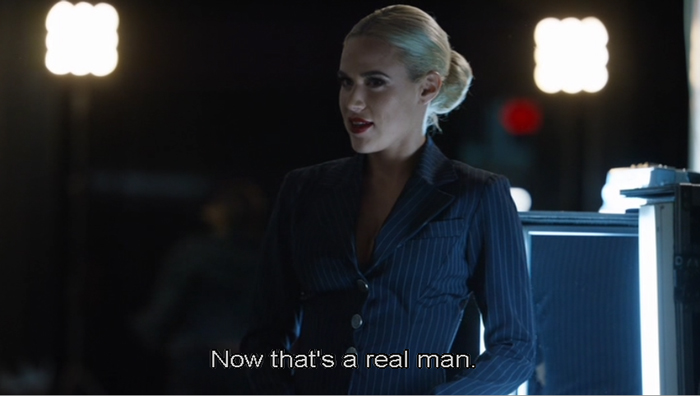 I’m pretty sure this is some kind of wrestling in-joke, but without that information it was still funny to see our hero suffereing the wrath of a wrestler trying to help out and making things worse. Also I like it because of the questions it brings up about the world the movie takes place in. I suppose all of these WWE Superstars exist there, but Dolph Ziggler does not? Or does Dolph Ziggler exist and Thompson just looks like him? And more importantly, is wrestling real in this world? Because it seems like these two are in character backstage.

I would like to highlight one of those little odd character moments that give a formula movie like this personality. Near the beginning we see Baker casually use an inhaler for asthma. Later, she yells to get Thompson’s attention, then uses the inhaler, then yells again and it’s louder that time. It’s never discussed and never becomes any more important to the plot than that, which makes it more interesting than if she lost the inhaler and couldn’t breathe or something more gimmicky like that.

There’s also a moment to show us the type of sexism a woman like her has to deal with every day: 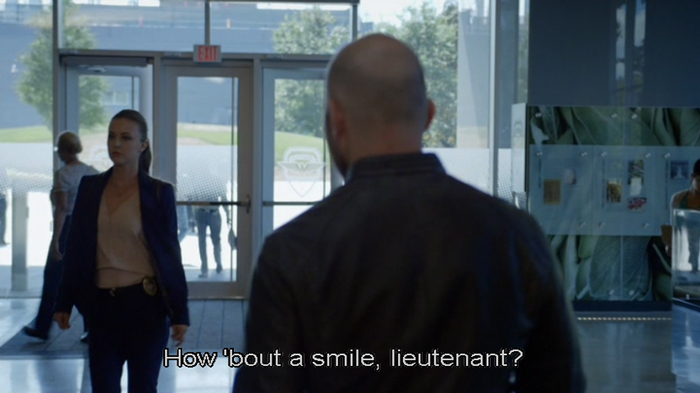 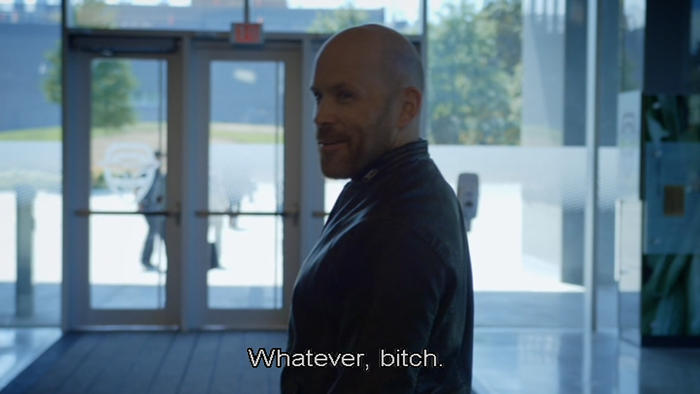 Which is also set-up for her to not care too much about professional accountability when that asshole gets punched in front of everybody.

Another little detail I appreciated has to do with the Seattle setting. Like most movies set in Seattle it has second unit establishing shots during the opening credits and everything else is shot in Vancouver, BC. (They did do a good job of matching up the first location with the real Seattle footage so for a second I thought they really were shooting along Lake Union.) This is a Seattle teeming with Russian mafia and gun dealers, which is not something I’ve noticed going on here. But they definitely did a little research because instead of calling Baker internal affairs they mention the Office of Professional Accountability. That’s a real Seattle agency for police oversight. As Baker explains in the movie, “They just don’t really like it when cops shoot civilians or other cops without probable cause to believe the suspect poses a significant threat of death or bodily injury to the officer or others, yeah.” I doubt they have anyone like Baker working for them – here’s an article from a couple years ago about the agency’s ineffectiveness – but the screenwriters must’ve at least done some internet research or something. I respect that.

Those writers are Michael Finch (PREDATORS, THE NOVEMBER MAN) and Richard Wenk (VAMP, THE MECHANIC, THE EQUALIZER) and the director is John Stockwell, the actor from CHRISTINE and DANGEROUSLY CLOSE. I prefer his KICKBOXER: VENGEANCE and IN THE BLOOD, but he’s a generally dependable b-movie journeyman, and this is no exception.

It’s not half the movie, but the final shot reminds me of STONE COLD: 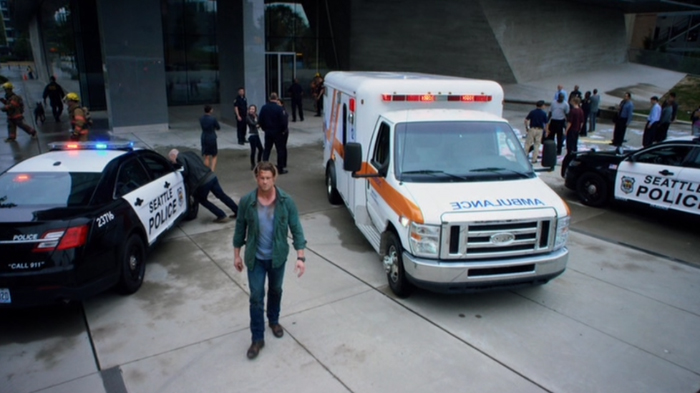 and that can’t be a bad thing.

Dolph Ziggler DTV fake Seattle John Stockwell Josh Blacker Kane Katharine Isabelle Michael Finch Richard Wenk WWE Films
This entry was posted on Tuesday, April 25th, 2017 at 12:28 pm and is filed under Action, Reviews. You can follow any responses to this entry through the RSS 2.0 feed. You can skip to the end and leave a response. Pinging is currently not allowed.