Here’s one from Cannon Films and our friend Albert Pyun, but I’m sorry to say this is the most boring one I’ve seen so far in my back-to-school marathon. The idea behind it, at least, is different from the other ones I’ve seen. This time the school is overrun with troublemakers spraying graffiti and what not, but they’re not the bad guys – that would be The Sentinels, a group of fascist jocks who patrol Vista Verde High School to keep people in line. Their main job at school is just painting over graffiti, but outside of school they actually track people down wearing masks, beat the shit out of them and make them think they’re going to murder them, then leave them crying out in the middle of the woods. Don’t you hate popular kids? 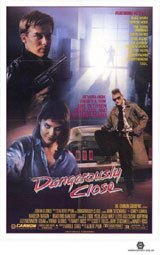 The leader of the Sentinels is Randy, played by John Stockwell (also co-writer). He’s a rich kid (we know from the modern architecture on his house and his Corvette). He’s trying to get the editor of the school paper (also his pool boy, and the wimpy protagonist of the movie) to cover the Sentinels in a more positive light, so he invites him over, offers him a drink, and introduces him to his parents. Then some other stuff happens, muddily photographed. There are some parts with people silhouetted against eerily lit fog. That was kind of cool.

These guys are such assholes they go after a guy at home for “vandalizing” the school. I think their plan is to spraypaint his house or car or something, but he sees them and then they shoot at him. I think they’re really going after him because he’s the only black guy in school. He’s played by Miguel A. Nunez, Jr. – “Demon” from FRIDAY THE 13TH: A NEW BEGINNING and “Spider” from RETURN OF THE LIVING DEAD.

Don Michael Paul is in there somewhere too. Whichever character is “Ripper,” that’s the director of HALF PAST DEAD.

The hero’s best friend (Bradford Bancroft) is named Krooger, but he calls himself “The Kroog Warrior.” He has a mohawk and a Mustang souped up in the tradition of MAD MAX. Maybe the funniest part of the movie is when he’s driving to school and pushes a button on his dashboard that says “deploy” and speakers raise out of the top of the car to blast everybody with cheesy rock music.

I don’t know man, this guy looks like Rambo compared to today’s chicken-legged rock stars, but I still have trouble thinking of a dude wearing eyeliner and dangly earrings as a tough guy. I don’t care how fingerless his gloves are.

These characters are not very interesting, some of them I can’t tell apart very well, the action is rarely exciting and there’s just no momentum to the story. I will give it credit though for a twist at the end that I didn’t expect. (SPOILER.) It turns out that the Sentinels really aren’t the ones who killed the kids who have been murdered – it’s actually their asshole teacher Corrigan. And they get really upset when they realize they helped him figure out which kids to kill. I didn’t expect that.

The video cover makes a big deal about the movie containing Robert Palmer’s song “Addicted To Love.” So when this came out if you didn’t have the Robert Palmer “Riptide” tape yet, and you didn’t have a radio or MTV (which played the god damn thing every other video) then this must’ve been incredibly exciting, because they play part of the song quietly in the background of a scene where they’re driving around. What a great value.

I have no idea why it’s called DANGEROUSLY CLOSE. 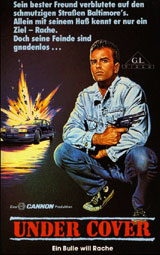 Okay, so that one came out in 1986 and it was a bust, but in 1987 John Stockwell graduated from lead actor to director in an infinitely better Cannon high school thriller called UNDER COVER, written by his DANGEROUSLY CLOSE co-writer Scott Fields. It’s funny, I found these two titles doing a keyword search on IMDb for school themed movies, and happened to pick them up at the same time without realizing the Cannon/Stockwell connection at first. UNDER COVER even has a scene where the main character is watching DANGEROUSLY CLOSE on TV.

It’s called UNDER COVER because of the dark secrets that lie hidden in a school, dangerously close to the surface, under the cover of regular small town life. Also because the main guy goes under cover.

The lead is David Neidorf, kind of a Bill Paxton type. He convinces his boss at the Baltimore PD to make him a narc at some hick school in South Carolina, because his partner was killed while undercover there. Of the school movies I’ve been watching this is the only one to play with the idea of adults playing kids in movies. His boss 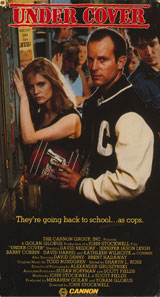 doesn’t think he can pass, he tries to cover up his hairline, some girls think he goes to the state college and when he tells them he’s in high school they say, “you look so old!!” I wanted to use the German video cover above because it was kind of a cool painting, but here’s the American one just to give you a better idea of how old this guy looks.

I never thought about this before, but school movies used to be kind of like kabuki, where women were played by men. They didn’t used to trust actual teens to play teens in movies, but these days they usually do okay. In fact the way things are going pretty soon they’ll cast nothing but 20 year olds to play all the grown ups. You can’t get an actual elderly guy to play an elderly guy, that would be ridiculous. They can’t act. Not to mention all the old people welfare laws and union rules and what not. You’d have to find twins.

Anyway, UNDER COVER does fine – most of the kids look fairly young, and by showing a broad range of little shrimps to hulking jocks they make you realize why Mr. Receding Hairline is able to go undetected.

You gotta figure that would be hard, pretending to be a kid. This movie avoids the issue of what if some girl tries to date him and he’s tempted, or what if a great teacher or mercenary notices he’s distant and tries to butt in and make a difference in his life, or what if a really important election comes up and he wants to vote but somebody spots him and figures out he’s over 18? They do go through the trouble of having him stay with a lady who pretends to be his aunt, but he never really brings any school friends home, so he might as well have just had a cool bachelor pad with a Nintendo and shit.

He’s an interesting character because he seems kind of dumb, and desperate to prove that he’s not. He’s not a smooth talker or clever quipper or supercop. He’s kind of a reformed underachiever, a dude trying hard not to blow it because this is important to him.

Jennifer Jason Leigh is also in here. Never knew she did a Cannon Film. She’s undercover too and works as his partner. If I understood correctly they got a whole squad of narcs in this school, including Mark Holton (Francis from PEE-WEE’S BIG ADVENTURE) whose work I last observed in chapters 1-2 of the TEEN WOLF saga.

As a director Stockwell has a reputation for making movies that you think would be bad but are surprisingly better than expected. I’ve heard that about CRAZY/BEAUTIFUL for example and I thought that about TURISTAS. UNDER COVER is his directational debut and it’s surprisingly well done too, in fact spectacularly well done if you consider it’s a god damn Golan and Globus production. There are lots of little touches and qualities they could’ve and you would think would’ve gotten away with leaving out. The accents are good, not too cartoonish. Everybody’s always glistening with sweat, puddles forming on their shirts, but they don’t comment on it being hot. The dialogue isn’t too direct, they don’t explain everything with talking.

I think it handles race in a subtle way too. David Harris (who is Cochise from THE WARRIORS, but to be honest I mistook him for the gay guy from REVENGE OF THE NERDS) plays a tough car thief kid. A white kid fingers Harris for helping him steal an El Dorado that was connected to the partner’s murder, and casually drops the n-word when describing him. Harris ends up arrested, and without saying it you can tell that Neidorf isn’t convinced he’s guilty and seems suspicious of the chief’s rush to blame him. Why? I think it’s because Neidorf is from Baltimore, a city with plenty of segregation and racism, but at least his world is more integrated than here. His boss is black, for example. So he doesn’t go for this small town blame-it-on-the-black-folks business.

Ironically the chief here thinks of it as “the city” and taunts Jennifer Jason Leigh about coming from a smaller town, saying she’ll stay here because she’s becoming a “city girl.” I think Neidorf misses the real city though, and I love how clear that is in the ending. As he drives off he finds an Orioles game on the radio, and he laughs. You can tell how happy he is to be going home.

Albert Pyun back to school Cannon Films Jennifer Jason Leigh John Stockwell
This entry was posted on Wednesday, September 23rd, 2009 at 2:46 am and is filed under Action, Reviews. You can follow any responses to this entry through the RSS 2.0 feed. You can skip to the end and leave a response. Pinging is currently not allowed.

13 Responses to “Dangerously Close and Under Cover”