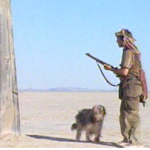 It’s a dangerous world, and they’re constantly on the run. Blood’s job is to sniff for approaching enemies. Vic’s is apparently to find a woman to rape. He has a hard time getting up the nerve to go through with it, though, and Blood nags him about it. I thought the worst thing about dogs was that they eat cat poop out of the litter box and then jump up in your lap and lick your face and try to pass that off as affection. It turns out it goes deeper. 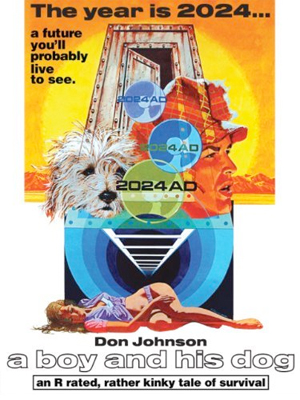 Eventually Vic corners a woman named Quilla June (Susanne Benton, THE LAST HORROR FILM) and threatens her, but before he can do the assault they have to both escape from other attackers. In the process they get to know each other and the relationship turns consensual. This is a movie from the ’70s, when that type of shit was a popular trope, but it’s actually a trick: she was sent by her father (Jason Robards, ONCE UPON A TIME IN THE WEST) on a secret mission for an underground settlement called “Downunder” (also referred to as “the State of Topeka”) to lure in a male for breeding.

Is the raping the most misogynistic part of this movie, or is it Vic’s attitude that Quilla June is a silly nag spoiling his fun by pressuring him to settle down in polite society? Or maybe it’s Blood’s attitude that she’s a treacherous honeytrap, or the fact that they’re both pretty much right? That’s the world and the character, but the movie seems to endorse it with a mean-spirited punchline that Ellison (who seems to approve of the movie overall) called, “that moronic, hateful chauvinist last line, which I despise, and which I urge audiences to ignore, the line I could never get L.Q. Jones to delete, because when he tested the film at colleges, that line was the biggest applause-getter from all the frat boys and jocks and asshole college wimps who were nothing better than Vics-in-waiting… the cheap manipulative demeaning and hateful smartass retort that Blood would NEVER NEVER NEVER have spoken.” (He says the crucial thing about the story is that Vic doesn’t eat the meat, he just gives it to Vic.)

Anyway, Blood never did like Quilla June. I think this is partly because he’s a dick but partly legitimate. You can see how annoying it would be to him when she talks to him like people talk to a normal dog.

Well, if you can stomach that boys-and-their-dogs-will-be-boys-and-their-dogs toxicity then this is a quirky take on the genre. The occasional fights and escapes are simple and clumsy, so it doesn’t feel action-oriented, it’s more arty low budget satirical world-building business like CHERRY 2000. Deciding to stay with the girl, Vic climbs underground and walks through endless maintenance tunnels before he’s somehow in a cemetery (with sky) where propaganda recordings play over loud speakers until he smash-cut wakes being forcibly bathed in front of clean, clothed citizens eating ice cream sandwiches. I like this disorientation even though I wasn’t sure if it was all surrealism or partly sloppy filmatism. 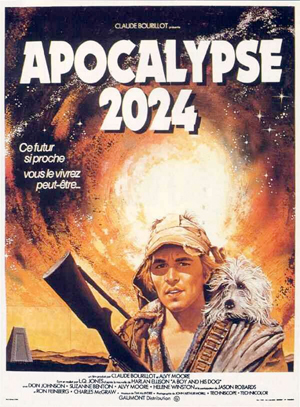 Vic is given the requisite farmer uniform (plaid shirt, jeans, straw hat) that most of the men wear, and joins a big after-dark picnic. Everyone wears mime makeup and there’s a marching band and he gets in trouble for unleashing a dog (I think trying to send a message to Blood). When he learns that they’ve brought him there to inseminate the women he has a big “well why didn’t you say so?” type laugh. Not as funny though when it turns out to mean he’s strapped to a hospital bed cumming into a tube while couples get married in front of him. I mean I’m sure that’s somebody’s fetish, but apparently it’s not Vic’s.

Luckily Quilla June is a rebel, upset by the Committee’s eagerness to marry her off to some dude despite her cooperation with this mission. So she busts Vic out and they make a run for it like THX-1138.

I guess it’s not too much of a stretch to say that Vic is the dog. He spends his life sniffing around for something to eat or hump. In the Downunder people are domesticated, told what to do and who to be with. And they literally try to breed Vic. Use him to make some purebred puppies, with papers. It’s gross. In the end I guess he goes off leash. But I would not say that he has been a good boy. I don’t care if he eats the meat or not.

Still, this is one of the best movies in the whole AIR BUD franchise, at least of the ones I’ve seen.

Don Johnson Harlan Ellison Jason Robards L.Q. Jones post-apocalypse Susanne Benton talking dog
This entry was posted on Wednesday, April 26th, 2017 at 9:27 am and is filed under Reviews, Science Fiction and Space Shit. You can follow any responses to this entry through the RSS 2.0 feed. You can skip to the end and leave a response. Pinging is currently not allowed.

8 Responses to “A Boy and His Dog”