Vern Has Seen The New Seagal, DRIVEN TO KILL! 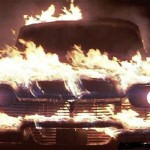 First of all, let’s be honest: no Steven Seagal character really has to be “driven” into killing. He’s never gonna play a peaceful guy living an uneventful life as a librarian or a computer consultant who one day is forced by circumstances to tap into a savage side of himself he never knew existed. That’s just not a Seagal character type. True, in MARKED FOR DEATH he states an explicit isolationist philosophy to Keith David and only starts killing a few minutes later when his sister’s house gets shot up by gangsters. But even in that one he’s already done a whole bunch of killing earlier in life without necessarily being driven into it. He’s never just an ordinary non-violent guy at the beginning of a movie.

And especially in this one, because although he is a very successful crime writer under the name Jim Vincent, everybody knows he’s actually Ruslan (no last name, like Prince, McG or Vern), former Russian gangster. In a rare visual change to the iconic persona, Seagal sports MARK OF CAIN style tattoos on his forearms. There’s a nice badass moment when some young guys are pushing him around, he breaks a glass on one guy’s head and then pulls up his sleeves. The other guy just about shits his pants before he starts apologizing. 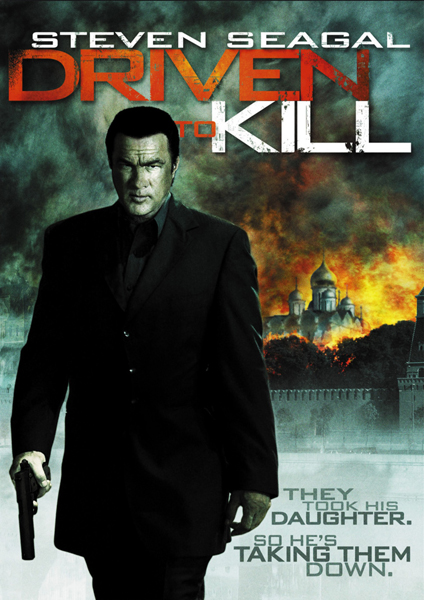 (Come to think of it I’m surprised there hasn’t been a Seagal movie where a guy got so scared he shit his pants.)

Seagal does try for a Russian accent throughout the movie (unlike in HALF PAST DEAD where he was also supposed to be Russian but only had a Kevin Costner level of dedication to the accent). I’m one of the bigger Seagal fans you will find but I have to admit that accents are more one of his hobbies than one of his talents. Still, he’s been trying since movie #3, OUT FOR JUSTICE, so it would be a little late to start complaining now.

Following up AGAINST THE DA RK, my all time least favorite Seagal movie (because he’s barely in it) and the disappointing KILL SWITCH by this same director, DRIVEN TO KILL is kind of a relief. It’s not great but it’s somewhere around the upper range of his DTV work. The photography’s less ugly than usual, the fights are very violent, the story isn’t too convoluted, and he seems like he’s putting some effort into it. I mean everybody knows Seagal is a Buddhist, right? But in this movie he wears a crucifix, because that’s what the character would wear. It’s not exactly Viggo Mortensen going to Siberia and travelling around as his character from EASTERN PROMISES, but it’s better than AGAINST THE DARK where his only character trait was “has sword.”

We know Ruslan’s not exactly fond of himself because of the opening scene where he shows off to his now-customary way-younger-than-him-girlfriend by playing a game where he crushes paper cups not knowing which one has a metal spike under it. She asks what the trick is and he says it’s to “not give a fuck.” He’s a writer who will risk the use of his hand because his girlfriend wants him to show her a trick.

Oh yeah, the plot: right before his daughter’s wedding, some thugs come in, kill Ruslan’s ex-wife, put his daughter in a coma, steal some stuff. It’s obviously a set up and there are a number of suspects: the sleazy lawyer new-husband of the ex-wife, the rival Russian gangster father of the groom (played by Igor Jijikine, the scariest looking Russian in KINGDOM OF THE CRYSTAL SKULLS), I guess maybe the groom himself, and the one-armed man or somebody. So of course Ruslan has to figure out who did it and kill the god damn shit out of them, plus other people along the way.

There are a bunch of themes going on here, and the main one is revenge. Of course, he’s out for revenge (or justice) in a bunch of his movies, but in this one the characters keep talking about it. First, the lawyer-husband tells him he would like revenge, but is not as good at it as Ruslan, and would like Ruslan to get the revenge. (I would chop the wood, but you’re so much better at it than me, maybe I’ll just stay here and drink lemonade while you do it.) Then Ruslan goes to Stephan, the groom, and demands that he come with him to help get the revenge. Co-revenge. Then Stephan’s father reveals to his thugs that he actually (SPOILER) set up the whole thing because he wanted his son to get revenge, to make a man out of him. Rite of passage. Like sending him to camp.

This is also not the first Seagal movie where he still talks to his ex-wife and is better than her new husband. He hates himself but knows the new guy is a scumbag and hits on the ex in Russian right in front of the guy. These are not problems the slim, high kicking action stars of the ’80s and ’90s usually thought about.

Ruslan was obviously not a great father, because he hasn’t seen his daughter in years, but now I believe he’s kind of spoiling her. You see, his daug hter is hard to kill. In other words, she’s in a coma but they told everybody she was dead to protect her from assassins, exactly like Mason Storm in HARD TO KILL. But Mason Storm didn’t have his dad to get revenge for him, he had to wake up 7 years later, re-train himself, then find who is responsible and personally take them to the blood bank. Ruslan has worked hard for his daughter to have a more comfortable life than him, so he’s getting the revenge for her, saying “Those who did this to you will cry tears of blood. This I promise you.”

Stephan’s a square, but his gangster father wants him to follow in the family trade. Ruslan at first seems to think Stephan is a sissy, and pushes him into a situation where he kills somebody for the first time. But ultimately I think he’s trying to give Stephan kind of a SCARED STRAIGHT demonstration so that he won’t be like his father and will be a good husband.

The action is above average DTV. Lots of shootouts and rough early Seagal style hand-to-hand, some of the trademark Seagal knife fighting. No swords. (I guess Russian gangsters do martial arts, they just don’t get into the samurai shit.) Like in KILL SWITCH the fights are almost uncomfortably brutal – there’s enough gore in here to match some horror movies. There’s a couple of impalements with guys still gasping for air as the blood squirts out of them. The best kill (SPOILER) is the last one, when Ruslan uses a gun as a blunt weapon, impaling his opponent’s eyeball.

The best news: none of that Michael Bay on speed editing like in KILL SWITCH. That was literally the worst editing I’ve ever seen in a movie, and thank God they didn’t do that to this one. The only similar part is a weird series of jump cuts as a guy just stands there with his ear bleeding.

DRIVEN TO KILL is Seagal’s first movie under a new distribution deal with Fox instead of Sony. So the fact that it doesn’t suck as bad as the last two might be a sign that they’re letting him do what he wants or that he cares more now or something. Also the Photoshopping on the cover isn’t as bad as usual – that might even be his real body! It’s actually kind of a cool looking cover. “They took his daughter. So he’s taking them down.” It is misleading, though, because he does not actually burn down or blow up Russia. (SPOILER.)

I do think they should’ve stuck with the original title RUSLAN. Less generic and kind of a nod to NICO, the overseas title for ABOVE THE LAW. For some reason DRIVEN TO KILL keeps making me think it’s about deadly ex-CIA race car drivers.

That’s in for my preliminary findings.

DTV revenge Seagalogy
This entry was posted on Monday, May 18th, 2009 at 10:47 pm and is filed under Action, AICN, Reviews, Seagal. You can follow any responses to this entry through the RSS 2.0 feed. You can skip to the end and leave a response. Pinging is currently not allowed.

10 Responses to “Vern Has Seen The New Seagal, DRIVEN TO KILL!”