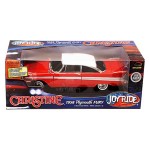 Actually, it’s a better movie than I remember it being when I saw it back in the ’80s, and I’m going to give most of the credit to Mr. John Carpenter. I’m not saying this is HALLOWEEN or THEY LIVE but it’s a good straightforward haunted car movie. The movie stars Keith Gordon (the kid from HOME MOVIES and DRESSED TO KILL) as a nerdy kid whose jock buddy tells him he needs to get laid now that he’s a senior and who gets his ass kicked in metal shop. They stab his sack lunch to death with a switchblade and he suffers the humiliation of everybody seeing that his mom packed him yogurt.

So what he does, he finds this old piece of shit car that he buys from a crazy old coot in a shack (Roberts Blossom, who was fucking brilliant in DERANGED). The old man doesn’t tell him that his brother just died in the car but he does tell him it’s named Christine. And that’s what the kid always calls it, “Christine,” not “my car.” And everybody acts like that’s normal, for some reason.

His parents don’t approve of the car so he gets a space in a garage inside a junkyard and starts fixing Christine up. This was before the invention of Pimp My Ride, so he puts the elbow grease in himself and he gets the job done. As he does it he becomes less nerdy, more manly, wears darker clothes, slicks his hair back, even starts wearing his collar up like he thinks he’s in the ’50s. Suddenly he has a girlfriend and he has the balls to call his dad “motherfucker” but nobody can really stand him because he’s obsessed with the fucking car. I mean Christine.

But worse than that though, the car is going around running people over, causing people to choke and shit like that. The car is jealous of the girlfriend. Christine goes after anybody that wants to harm her man, but you don’t really know if he’s inside there or if the car is going out on joyrides by itself. Like if Knight Rider came back messed up after the war and went on a killing spree. And the kid gets crazier too. I think this is the only movie where a guy gets possessed by a car. Also there’s a scene at the end where a bulldozer sodomizes the car. John Carpenter even says so on the commentary track. I think that is a historic cinematic first and last.

Somehow it’s actually kind of creepy that after he gives her life, Christine can repair herself. She gets totally destroyed several times and then fixes herself. There’s even a scene where she’s driving around on fire and it’s a pretty amazing image. When she gets totalled, she repairs herself. They did this by crushing the car with hydraulics and then running the film backwards. I guarantee you they’d do this now with computers, but this is so much better because you know it’s real metal, it’s a real car. It’s great.

There’s some silly crap in here, I mean aside from the haunted car business. Like Harry Dean Stanton is a cop investigating the murders, and he suspects Keith Gordon. But he asks him questions like “how did you get the parts to repair the car? How did you get this color of paint that they don’t make anymore? Do you have the receipts?” Like he knows it’s a magic car and he’s trying to get him to admit it. Come on cop, you can’t prove it’s a magic car, just lay off.

The depiction of high school is not all that realistic, but it’s kind of like DePalma did in CARRIE, and maybe this is a compliment to Stephen King’s story too: it kind of puts adults in a teenage perspective while watching the movie. Everything is heightened. The guy that picks on Keith Gordon is this muscular giant with huge sideburns. He looks like John Travolta mixed with He-Man. And I think when you’re that age, that’s exactly what the older kids in school look like to you. John Travolta mixed with He-Man.

But what’s best about this movie is the way it shows men’s obsession with cars. Getting a car is how this kid becomes cool, how he becomes a man, how he gets a girlfriend. It’s how he becomes independent from his parents. When the bullies want to get him back, they don’t beat him up, they beat up his car. He leaves his girlfriend for his car. He fondles his car like it’s his girlfriend. The car is the most important thing to him, he and his car become one.

One word of caution, this movie has the song “Bad to the Bone” on the opening credits. I used to be pretty sure that was one of the worst songs ever made. But watching this now, I realized that I was wrong. See, for this movie it works, the words fit, the attitude fits. For this movie, it almost seems like a respectable white rock guy doing a blues song. This was before it was in every other bad movie as a way to say that a guy is tough or, you know, bad to the bone. Or in every movie about a dog. Because get it, dogs eat bones, at least in cartoons. So I realized it’s not really the song’s fault. It’s the way the song has been abused. It’s like the flag. You see the flag on enough ads and pickup trucks and lapels, you start to think you don’t like the flag. But actually you just don’t like these assholes who think they own the flag. The flag itself is fine, and what it stands for to you is great. Those guys are just using it wrong. “Bad to the Bone” is the same way, it’s okay in this movie. Not to say it’s as good as the flag though. I am NOT dissing Betsy Ross, she did a great job. I’m just saying don’t worry, it’s not that bad in this movie. But you can put it on mute if you got a problem with it. thanks.

John Carpenter Stephen King
This entry was posted on Thursday, October 14th, 2004 at 4:54 am and is filed under Horror, Mystery, Reviews, Thriller. You can follow any responses to this entry through the RSS 2.0 feed. You can leave a response, or trackback from your own site.