On the other hand, alot of Bronson’s movies are (by design) pretty formulaic, they’re all about taking the type of basic situations you’d want to see Charles Bronson in and then putting Charles Bronson in them. Therefore if you do have a new action icon to star in some movies, these are the types of movies you might want to try to put him in. And Jason Statham isn’t a bad candidate, in my opinion.
Statham is some weird hybrid of different types of action icons. He has Bruce Willis’s hairline and working man features. But he also tends to wear expensive suits, or pretty boy shit that’s tapered to emphasize his physique. (He wears a high-necked sweater in this thing that no other Expendable could get away with.) Like the Van Damme generation he has martial arts skills (although he doesn’t use them here). With his weirdly sloped shoulders he even has a more regular-sized version of The Rock’s cartoonish super hero body. His face can sell tough, world-weary, street smart, heartless bastard exterior, actually-he’s-a-sweetheart interior. Doesn’t seem to have alot of range, but can always pull off this one type of character.

If there’s gonna be a new Bronson obviously it’s gotta be Danny Trejo, but I do believe Statham is the closest thing we have to a consistent modern international action icon outside of Asia. He dips his toes into other types of roles, but he really seems like his main interest is action movies, and he keeps them coming every year.

You know I hate the fuckin CRANK movies, and I only really liked part 2 of the TRANSPORTER series, but I have to give him respect. He has created a persona and style in those movies plus DEATH RACE, THE EXPENDABLES and very slightly more respectable studio movies like THE ITALIAN JOB and THE BANK JOB. So now just like there’s something you expect from “a Charles Bronson movie” you have an idea what to expect from “a Jason Statham movie.” And THE MECHANIC (remake) is a pretty good version of a Jason Statham movie, the kind that’s more on the serious side and not cartoony trying to be goofy all the time. 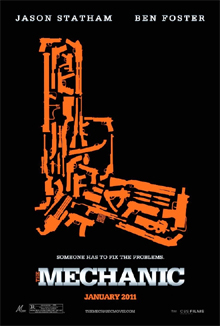 So I’m not offended by it. I just think it would be smarter to make a ripoff of THE MECHANIC that’s about the same basic thing instead of taking the title and forcing us to compare them. I mean, the opening assassination scene in this remake is pretty cool, so it’s too bad I have to compare it against the way better 16 minute dialogue-free opening of the original.

It’s actually a more faithful remake than many these days, including DEATH RACE. They use the same basic situation and character names. The protagonist is still Arthur Bishop, an elite assassin for an international organization, who lives a friendless and isolated life because of his dedication to his craft. As in the original he has a nice house and listens to classical music on vinyl (and man, he has a nice turntable). He still kills his boss, Harry McKenna (Donald Sutherland instead of Keenan Wynn) and then meets the boss’s douchebag son Steve (Ben Foster from HOSTAGE and 3:10 TO YUMA instead of Jan Michael Vincent – an improvement, despite bad facial hair) and takes him on as an apprentice, getting himself in trouble with the organization. The training and killings are different, but that’s the fun of it. You want to see some new shit, right?

I’m not clear how the writing worked on this one. They credit the original writer Lewis John Carlino as if he co-wrote it, not a “based on a previous screenplay by” credit. They also credit Richard Wenk, the writer-director of VAMP, that weird new wave vampire movie starring Grace Jones. The director is Simon West, who did CON AIR, so until I had a whim and went to see it this morning I really wasn’t planning to. CON AIR was one of the first movies that I hated for having indecipherable camerawork and editing, and I’ve never heard anybody claim his movies got better after that.

Well, I’m not sure if he’s improving or not, it’s been so long since I’ve seen CON AIR it probly seems tame compared to the gibberish it paved the way for. But he sure hasn’t picked up a crisp and clear new style. Any of the kinetic action scenes – fights or chases – are garbled post-action, too many edits and not clear enough camera work, like you’d expect from a pioneer of forever-ruining-the cinematic-language-of-action-films. Not the worst ever, but not excusable. Not completely useless, but hardly very useful.

Luckily, in between action scenes the style is pretty calm and straightforward. The movie survives because most of it’s not about that – it’s about these two characters, their inevitably doomed friendship, and the clever plans they put in place to kill people. And it has several little emotional moments that worked for me – between Bishop and McKenna when the shit goes down, between Bishop and Steve when Steve is opening up about his father’s death, between Bishop and a really beautiful prostitute (you know how they have those in movies) during the awkward morning after. Also, the things Steve does that reveal how fucked up he is are pretty effective. Foster is good at playing a dude who goes too far.

I did miss the original’s signs that Bishop was an emotional wreck because of what he does. Bronson’s Bishop took anti-depressants and always carried around a ball of wax that he would squeeze when he was stressed out. It doesn’t have to be the same thing, but I think Statham could stand a little of that vulnerability. Gives you character. Also there’s a distressing lack of motorcycle chases and lip-reading in this one.

But I did feel a little bit of an emotional attachment to the characters by the end, so the best part to me was the tension and sadness between them as they sat in a truck together, neither acknowledging that one is about to try to kill the other. The script does a good job of waiting until the end for Steve to give a couple lines about his emotional state (he has anger in him that he’s able to purge by doing these assassinations) and Foster delivers it well enough to work. I don’t think I saw it this way in the original, but I like how Steve going back to Bishop’s house at the end sort of signals that Bishop became a father to him. He complained that his real father wasn’t there for him and that he didn’t inherit anything from him. But he tries to inherit Bishop’s house, car, and musical tastes. Not the greatest son in the world, I guess.

One difference from the original (if I remember right) is that they actually call him a “mechanic,” and make up an explanation for using that term. And I guess you could say he’s literally a mechanic since he has an old car he’s fixing up. Another difference is that this is produced by Millennium Films, so it has a port of call New Orleans to take advantage of post-Katrina tax incentives.

THE MECHANIC is pretty solid. Don’t take that too lightly, because “pretty solid” is better than most action movies these days. Still, early in the movie I felt the possibility that it could be something more.

Let me explain to you how this movie gained my trust and then betrayed me. Early in the movie Bishop goes to meet with his boss, a guy with a wedding band, and between me and you I’m guessing he’s not the nice family man he outwardly appears to be. That’s just a theory. The boss keeps Bishop waiting as he stays in his limo talking to his teenage daughter on the phone. Bishop stands with a bodyguard, a big guy with a Super Bowl-type ring that says “World Champion” on it.

“You can’t,” the bodyguard says arrogantly. “Unless you’re a world champion.”

To me, this is a potentially great action movie moment because of what it tells you and what it makes you ask. What it tells you is that Bishop’s boss is hard to get at. He has a big bodyguard who doesn’t seem to like Bishop and who has an elite skill of some kind, so elite that he is actually the world champion of it. And the fact that the movie is telling you this also tells you that Bishop is gonna have to get at his boss at some point, and he’s gonna have to get through the champ.

What it makes you ask is, obviously, what is this guy the world champion of? Probly not boxing, because they got a belt for that. Maybe a specific martial art, judo or kenpo karate or something. Or greco-roman wrestling. I’m definitely thinking it’s a fighting sport.

It doesn’t matter what the answer is (unless it turns out to be kayaking or something). This information, and this question, make an action movie promise. They say hello audience, I would like you to know that toward the end of this movie Jason Statham is gonna have to pit his skills against a world champion fighter. It will be a difficult and awesome fight, but somehow he will win. And it is definitely very possible that after defeating the champ he will take his ring. He said he wanted one, after all, and if he beat him wouldn’t that sort of make him the world champion? Not officially, but off the books at least?

I like when a movie makes a promise like this. I keep it in my head, anticipating it. At some point I forget about it, until something reminds me, and I think “oh yeah, the championship! This is gonna be great!” In this case it’s in a montage where Bishop is on his computer doing his research and making his plans. He types in something and a full screen photo of the ring from earlier pops up. Obviously he’s looking him up. Maybe finding out what his skills are, and his weaknesses. Past injuries or something like that.

Well, nope. It turns out he’s just finding out where the champ lives. They go shoot him in the knee and then threaten his wife and daughters to get him to talk. There is no fight. They never say what sport he played. I guess he was just the world champion of having something you can use against him.

I’m not gonna say it ruined the movie for me. By this point I’d already enjoyed it. But it’s one example of the difference between a not-bad movie and a really good one. Know your badass momentum, filmatists. Make a promise and then either deliver on it or sneak up behind me and deliver something better. Don’t imply awesome and then replace it with pretty cool.

Maybe in part 2, though.

Ben Foster Donald Sutherland hitman Jason Statham Millennium Films remakes Simon West
This entry was posted on Friday, January 28th, 2011 at 7:54 pm and is filed under Action, Reviews. You can follow any responses to this entry through the RSS 2.0 feed. You can skip to the end and leave a response. Pinging is currently not allowed.