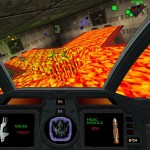 “From the studio that brought you HOSTEL and SAW…”

(comes a British movie from last year that they bought the rights to.)

Let’s say you’re six ladies (5 British) who go together to explore an uncharted cave somewhere in the Appalachians. And after you crawl through a very narrow tunnel, your entrance caves in and as far as you know there’s no way out, you’re under 2 miles of rock and nobody knows you’re there.

Well, you gals are pretty much fucked. So it’s almost beside the point that after you wander around for a while longer you’re gonna run into some weird underground fuckers (or wufs) who are gonna crawl around squealing like fighting cats and try to eat you.

I’ve been hearing about this movie for a year or more now since it took a while to get from England to our shores, or at least to our theater screens. So there’s alot of hype around it and the advertising is embarrassingly over the top, using a quote where some joker claims it’s “the scariest horror-thriller since ALIEN.” (Ever heard of THE SHINING, dude?) After all that buildup it’s easy to focus on the weaknesses, like there’s a couple too many BOO! moments in the first section, and the part where a girl breaks a monster’s neck is maybe a little too Seagal, and one revelation about the character relationships is arguably unneeded, and some of the action is kind of hard to follow. But you know what, that shit’s insignificant in the face of what a truly grueling experience this movie is. It’s a real journey from beginning to end. It’s nice to see a movie again where when the heroine crawls out of the cave you really feel like she’s been to Hell and back. And she certainly looks like hell. Well, actually she looks more like Carrie.

That’s right Brits, you heard me. In our version she gets out of the cave. They made a special American happy ending where she climbs out on a rainbow and gets saved by a unicorn, and everybody hugs. I was concerned about the changed ending, thinking maybe I should just watch the PAL-DVD import instead of seeing it in a theater. But now, having seen only the rainbows and unicorns ending, I’m thinking I like it. After all that poor gal goes through I think you sort of need some relief at the end. I know that Sam Raimi’s rule of horror is “you must taste blood to be a man,” but there’s another rule of horror that says “if you completely submerge yourself in a puddle of chunky blood, then come out and beat a monster to death with a bone, you should get some kind of reward for that.” Yes, some would say that getting to submerge yourself in a puddle of chunky blood and then beat a monster to death with a bone is a reward in itself, but keep in mind this gal has had a long day. That kind of thing can be stressful if you’re not in the right mood.

Anyway, what’s really brilliant about this movie is that it thoroughly stresses you out long before the wufs show up. The most harrowing section of the movie is when the ladies crawl through that long stretch of rock that’s no bigger than the ventilation shaft Tom Skerrit crawled through in the aforementioned alien movie. Only they’re not doing this to save their asses, at this point they’re doing it for fun and adventure. There’s one spot where there’s water almost to the top and you can’t believe they’re willing to crawl through there. And then they start doing the dangerous stuff. I don’t know of another movie that makes you feel that claustrophobic. It’s mostly the idea that’s disturbing but the way it’s shot doesn’t hurt. There’s one scene with a gal in some water. The water’s not a problem for her but they shoot it from an angle where the surface of the water bounces up and down, getting closer and closer to the top of the frame, and you feel like you’re gonna suffocate.

I gotta say also, it’s nice to see an all-woman horror movie. The movie is pretty brutal – lots of blood, some stabbing, some flesh eating, some slow dying, some horrible betrayal, a compound fracture – but it’s not macho. It’s nice to see a movie where when people get horribly injured nobody yells “Don’t die on me!” or “Fight it! You’re a fighter!” or shit like that, they try to comfort each other and say everything is going to be all right, and they really mean it. As they get all covered with blood they do go primal and turn into mama bears, but it doesn’t have that feel of a male director trying to give you a Hot Chick Who Kicks Ass. They don’t give them any Ash oneliners. The little Ripley moments feel completely earned and genuine.

The director is Neil Marshall, who did that low budget soldiers vs. werewolves movie DOG SOLDIERS (which, come to think of it, everybody compared to ALIENS). I liked DOG SOLDIERS but I think he still deserves some kind of most improved ribbon for THE DESCENT. This one’s way scarier, the tone is much more controlled and man, the effects are a big improvement. I know it’s mostly a budget issue, but I’m still impressed that he jumped from dudes running around with unmoving wolf masks to these wufs. The makeup effects are great, almost Del Tororific. These almost seem like real creatures – weird albino naked bat children who crawl on the ceiling but thankfully are all mushy so they’re easy to kill with your bare hands. It’s like fighting a baby mole except it’s big as a human and it’ll bit your throat out if it gets half a chance.

I enjoyed this movie. It made me uncomfortable. I wouldn’t say it actually scared me, but I can imagine if you’re the type of person who gets scared by movies, this might do the trick on you. Unless confined spaces and weird underground fuckers coming at you in the dark help you relax. Come to think of it, those little guys are kind of cute. I bet some day they’ll domesticate them and Paris Hilton will carry one around as a prop and everybody will laugh at how silly THE DESCENT is. So let’s enjoy it while we can.

Neil Marshall
This entry was posted on Tuesday, August 8th, 2006 at 1:45 pm and is filed under Horror, Reviews, Thriller. You can follow any responses to this entry through the RSS 2.0 feed. You can skip to the end and leave a response. Pinging is currently not allowed.

3 Responses to “The Descent”