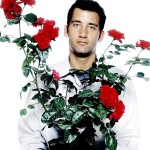 More importantly, the guy is holding a baby in one hand and a gun in the other. Forget what it means. Concentrate on what it is. 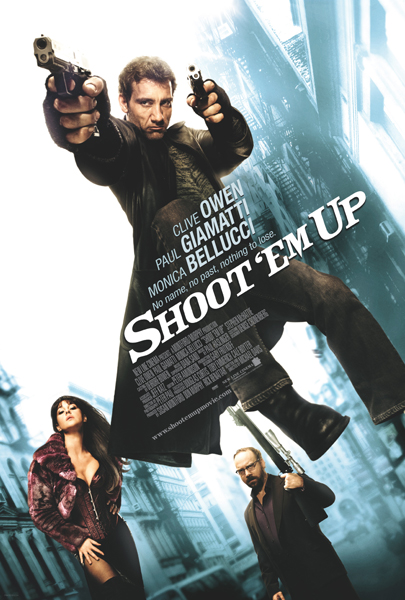 Well, that’s also what SHOOT ‘EM UP is. An entire movie based on the feelings you get looking at that poster. This one has Clive Owen instead of Chow Yun Fat (a worthy successor) and it’s a different baby (they tried to get the HARDBOILED baby but he wanted too much money). The movie has obvious references to Leone and Looney Tunes, and lots of bad puns like a Schwarzenegger movie, its influences are all over the place. But clearly the main one is John Woo, and specifically HARDBOILED. If director Michael Davis (writer of PREHYSTERIA 3) was a baby, John Woo would be carrying him during the shootout. But since he’s only a baby he doesn’t know what the fuck is going on. So the movie is John Woo not in substance or even in style, but in the simple fact that it’s a whole movie about a bad motherfucker carrying a baby while running around, shooting hundreds of people, sliding, swinging, rolling, dropping, flying, falling, catapulting, and, you know, carrying on. While shooting.

The movie is not a masterpiece. I say that only because I believe a movie like this COULD be a masterpiece. This one is not because the editing is too quick, the camera is generally too close to the action, the music is mostly cheesy, some of the oneliners are corny but not a good enough kind of corny, some of the running gags run too many times, some of the exposition of the deliberately convoluted storyline gets a little more clunky than is acceptable. In other words, this PREHYSTERIA 3 guy is no master yet. But the movie is a hell of alot of fun, I would be an asshole to dismiss it based on those flaws. I really enjoyed this movie.

Although it’s way more of a comedy and it’s about ten times sillier, the movie SHOOT ‘EM UP most reminded me of was TRANSPORTER 2. Because it’s action packed, it’s completely ridiculous, it wipes boogers on all matters of logic and science, it is not serious but pretends to be, and it’s less than 90 minutes so it gets in there, gets the job done and then hauls ass out the back door before you can say thank you. And leaves its empty beer bottles in your living room. But this one leaves more beer bottles than TRANSPORTER 2 does if the beer bottles are a metaphor for memorable gimmicks and acts of over-the-top violence. Which they are.

In case this is somehow the first you’ve heard of SHOOT ‘EM UP, I should probaly mention what it’s about. So I will describe the opening, which is a classic. Our nameless hero sits on a bus stop bench eating a carrot. Suddenly a pregnant woman runs by, clutching her stomach as if going into labor. He glances over, mildly curious at best. Then a car tears around the corner and crashes, its driver yelling that he’s going to kill her. He gets out, runs after her, asks our carrot-eater what the fuck he’s looking at. Before the guy turns the corner he pulls out a gun.

And Clive has to think about it for a little bit before he admits to himself that he should try to help her. And then he says, “Fuck.” The definition of a reluctant hero.

Of course he turns out to have black ops training, skills inherited from his father, a meaningful traumatic incident in his past, and every other cliche you would want him to have. (If I were you I would see the movie without reading on, because I’m gonna spoil just a couple of the gags. There are plenty to go around, but still.) So in this opening he winds up shooting an army of killers while simultaneously delivering the baby. And then he shoots off the umbilical cord. Can you believe that? At that point I was sold on the movie, and fortunately I did not find that I had bought a lemon. The movie delivers on the opening scene’s promise.

Gorgeous frenchwoman Monica Belluci plays the female lead (a lactating hooker, of course) and Academy Award loser Paul Giamatti gets to be the lead hitman. I bet he hasn’t fired that many guns in all of his previous movies combined times ten. Including THE HAWK IS DYING and the one where Frankie Muniz paints him blue.

Belluci and Giamatti are enjoyable, but the movie is almost entirely fueled by two things: Clive Owen’s grimacing, angry presence (alot like his character in SIN CITY, except with his real accent) and a constant barrage of preposterous action ideas and jokes. Again, I hate to give anything away at all but I will give you just three examples in case you’re not sold.

1. He’s hiding in a public restroom with the baby. But he’s trying to take a bite out of his carrot and he drops his piece in the toilet. So, while a gunman approaches, he leaves the baby on the floor and uses the diaper changing station to take his gun apart and clean it piece by piece.

(There are many classic restroom fights in cinema, and I am still hoping to see one where the hero washes his hands afterwards. I thought this might finally be the one but no dice.)

2. In a gun factory he duct-tapes guns to various shelves and sets up a complex system of strings and pulleys which he uses like marionettes to take out a platoon of henchmen.

3. Remember in DIE HARD Bruce had no shoes on, then in LAST MAN STANDING he tried to up the ante by getting attacked while having sex with Judd Apatow’s wife and having to shoot a bunch of guys while still naked. Well, Clive raises the bet by being involved in a shootout WHILE STILL PENETRATING Monica. And in fact he choreographs his movements and perhaps even the vibrations of his gun shots for maximum sexual performance. We can only pray this scene does not inspire people the way Marlon Brando’s butter did. Maybe the movie should have a disclaimer like cigarettes or JACKASS.

Now imagine dozens more gimmicks like those crammed into an 80-some minute lighthearted but bloody-as-all-get-out movie. It’s full of all kinds of shit like that. The only thing that would be better would be if it was not actually meant to be funny. It is trying to be funny, but oh well. It achieves its goal.

I gotta be honest, I will be disappointed if this does not become a series. Like I said the director is not a master, but I’d like to see what he’d do with a little more money and an established universe and audience. I think it will happen, because I think it’s gonna be a real sleeper. Of course, I’m terrible at judging those kinds of things, and I do know alot of people would say it was “stoopid.” But the particular audience I saw it with laughed all throughout and applauded at about 3 or 4 different points, all well-earned. If you love guns, or if you are like Clive’s character and you hate guns, then this is the movie for you.

Clive Owen
This entry was posted on Wednesday, September 5th, 2007 at 5:08 am and is filed under Action, AICN, Comedy/Laffs, Crime, Reviews, Thriller. You can follow any responses to this entry through the RSS 2.0 feed. You can skip to the end and leave a response. Pinging is currently not allowed.