In my opinion the opening is the best part of this piece. This one harkens way the fuck back to Bruce Willis’s Die Hard 1 (1988) in which John McClane was introduced as Hollywood’s most fucked up action hero. He’s separated from his wife, he fucks up bad and starts arguing with her, I mean the guy’s falling apart so much he’s walking around without shoes on. 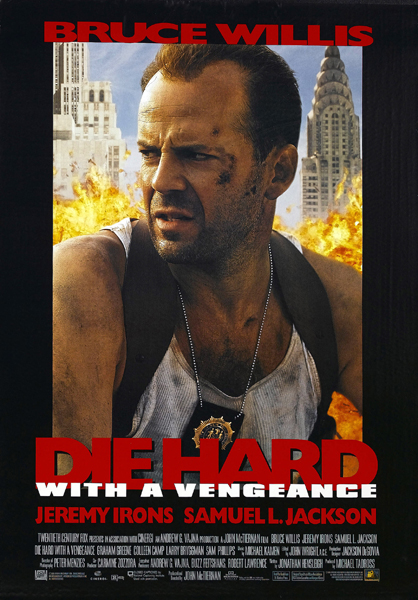 John McClane With a Vengeance is introduced in the same type of way. This time he’s suspended from the force, everyone hates him and makes fun of him. He looks like shit, he complains about his hangover, brags about his dick, and his co-workers enjoy sending him out into Harlem in his underwear wearing a sign that says “I hate niggers” (by special request from this fucker Simon.)

So while in the other ones McClane just wants to get through all this so he can talk to his wife, in this one he just wants to get over the fucking hangover. Unfortunately I didn’t expect this but his relationship with Hollie seems to be down the tubes, they’re living in different cities again and they haven’t talked in months. You don’t even see the dame during the movie although he tries to call her on the phone.

I wish they would have continued with McClane as this drunk fuck, but he kind of turns into Batman somewhere along the way, probably because of all this riddle me this shit Simon is doing. One problem I have is Bruce starts to get cocky. In the other ones, he is in a tight situation and has to improvise, and alot of times he starts swearing cause he knows the chances of this shit working are slim. I mean how are you going to be sure you can tie a firehose around your waist and swing down and kick through a window with bare feet. Well Bruce With a Vengeance wouldn’t be nervous. He knows how to drive a taxi the wrong way on a busy one way street, through a park, off a bridge – doesn’t even hesitate. He knows how to grappling hook from a bridge to a boat. And the cops all hate him at the beginning but then they let him do whatever he wants, like fly up in a helicopter and get on the megaphone and go, “Hey dickhead, did I come at a bad time?” as the cops surround the building.

On the positive side, he doesn’t get his badge back at the end or anything like that. He just blows the dude up and goes to make a phone call.

I like this movie. Simon’s robbery scheme is clever, and his riddles lead to some exciting action scenes. And of course Bruce is still representing for the Badass community which I really preciate, don’t get me wrong.

I don’t know why they needed to give Bruce a partner, but I enjoyed this gentleman Samuel L. Jackson. Like me Samuel is a Positive individual who tries to keep peace in his community. At the same time he does not want anything from no fucking whites and he is suspicious of McClane. And what Samuel shows in my opinion is that you can be a Positive individual and still say motherfucker alot, which in my opinion is a lesson Hollywood needs to understand if they’re ever going to come to terms with a dude like me.

Bruce Bruce Willis Jeremy Irons John McTiernan Samuel L. Jackson
This entry was posted on Wednesday, January 5th, 2000 at 11:58 am and is filed under Action, Bruce, Reviews, Thriller. You can follow any responses to this entry through the RSS 2.0 feed. You can skip to the end and leave a response. Pinging is currently not allowed.

18 Responses to “Die Hard: With a Vengeance”