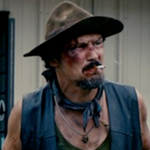 This is cheap but not at all cheesy. It’s artfully moody, takes place in a fully-realized post-apocalyptic world, is thoroughly grim and serious but not without its fantastical flourishes. It’s not one of those genre deconstructions that deconstructs out all the ingredients you paid for – it has cool monsters and gore. What it lacks in humor it makes up for in the warmth of strangers bonding, working together in a disaster and hoping for a promised land. It’s a good balance of THE ROAD with John Carpenter’s VAMPIRES.

It tells the story of young Martin (Connor Paolo, the young version of Kevin Bacon in MYSTIC RIVER and Colin Farrell in ALEXANDER) and his training by Mister (Damici), a grizzled nomad who helps him stake the vampire that killed his family and takes him on the road heading north to “New Eden,” where maybe they won’t have universal health care or Degrassi episodes anymore but supposedly it’s safe from bloodsuckers. Mister shows the kid the ropes about different types of vampires and how to kill them, gives him guns and arrows and a fancy stake. The vamps aren’t as plentiful as zombies are in zombie movies, which is lucky because killing them is much more involved. They can run and leap and hang from rafters and eat babies. I mean, these guys are real jerks. 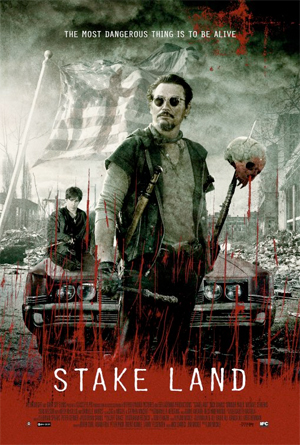 Of course, people should be more worried about people. They’re heading through the territory of The Brotherhood, a sick Christian cult/militia who believe vampires are part of God’s plan and consider our boys sinners for slaying them. Sister (Kelly McGillis, TOP GUN, THE INNKEEPERS) is a nun who Mister saves from Brotherhood rapists, proving he’s willing to kill different types of monsters. She’s the first new companion they pick up along the yellow brick road. Belle (Danielle Harris, HALLOWEEN 4 and 5 and I and II) they first see singing in a tavern, and she needs help because she’s pregnant and alone. Willie (Sean Nelson – holy shit that’s the kid from FRESH!) is a Marine who they save from being vampire bait. He gives us our only reliable information about the state of the world, having recently returned from the decimated Middle East.

I swear, I didn’t know Danielle Harris was in this when I rented it. She just keeps showing up in everything I watch. Also Marianne Hagan, the star of the Harris-less HALLOWEEN 6, shows up as a doctor. And I would be willing to bet that some of the other people in the cast have seen or heard of various HALLOWEEN movies. We live in a HALLOWEENcentric culture, that’s all it is in my opinion.

There are lots of cool little details to how the remnants of society work. I love when they come across some rednecks using a train to block entrance to their settlement. These guys seem like condescending bullies until Mister hands them a bag of fangs he’s pulled out of dead vampires. Then they let them right through.

Mister asks about liquor – it’s “mostly home made” but there is some beer on tap. “It’s a little sour, but it won’t kill you.” There’s another bar run by Larry Fessenden where they trade antibiotics and weed for drinks. And there’s a store that looks like a pathetic garage sale or the most picked over corner of a shitty Goodwill. People gather along certain roads trying to trade random junk.

Alot of the other stuff that happens we’ve seen before, especially after several seasons of The Walking Dead (which started airing a month after this came out). The people forming groups, finding settlements, being better at killing than others, crossing cannibals, hearing voices on radios, getting attacked on freeways filled with abandoned cars, scavenging vehicles, protecting pregnant women, worrying about bringing a baby into this world, dealing with the loss of friends and family, finding stragglers, getting captured and enslaved. The most original thing that happens – SPOILER cultists flying over in helicopters dropping vampires on them – does seem like an idea they might use on Z Nation, but there it would be kind of a tongue-in-cheek sharknado type thing. Here it’s the nightmarish sudden interruption of a joyous celebration.

Most of this is undeniably familiar material, but for me the execution makes it work. The scenery is more varied and appealingly photographed than The Walking Dead, and it manages to put the characters through a whole lot in less time and dialogue than a TV show. Mister’s attitudes clash with the others, and we get that without him having to make a big speech or get in a yelling match about it. They find hope in protecting this pregnant woman – a common trope, let’s admit – but his demeanor and lack of participation in conversations about the baby show that he’s dreading having to avoid danger while carrying around a little crying machine. He’s fallen further into post-apocalyptic living than they have, and it upsets him, but he’s wise enough not to say anything. Let them have their optimism.

Mister is a great character who shows his soft side in mentoring this kid without negating his stoic loner status. He’s actually a good specimen of a certain type of masculinity, the non-affectionate-but-caring father. It sounds funny talking about vampire and rat-zombie movies this way, but it absolutely makes sense that Damici started screenwriting so that he could have better roles as an actor. These are complex, likable characters that elevate genre stories and that he’s uniquely suited to play.

You could say this is a monster movie, but it’s more about people. I like when they kill vampires, but I love when they hug. They’re characters I enjoyed spending time with, even if it’s a terrible time for them.

Connor Paolo Danielle Harris Jim Mickle Kelly McGillis Larry Fessenden Nick Damici post-apocalypse Sean Nelson vampires
This entry was posted on Friday, October 28th, 2016 at 10:22 am and is filed under Horror, Reviews. You can follow any responses to this entry through the RSS 2.0 feed. You can skip to the end and leave a response. Pinging is currently not allowed.