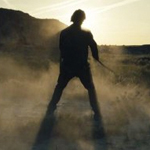 (On the other hand, there seem to be virtually no reviews of it and not even poster art available online. Does anyone even know it came out?) END_OF_DOCUMENT_TOKEN_TO_BE_REPLACED

This is cheap but not at all cheesy. It’s artfully moody, takes place in a fully-realized post-apocalyptic world, is thoroughly grim and serious but not without its fantastical flourishes. It’s not one of those genre deconstructions that deconstructs out all the ingredients you paid for – it has cool monsters and gore. What it lacks in humor it makes up for in the warmth of strangers bonding, working together in a disaster and hoping for a promised land. It’s a good balance of THE ROAD with John Carpenter’s VAMPIRES. END_OF_DOCUMENT_TOKEN_TO_BE_REPLACED