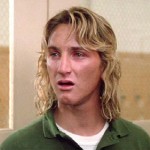 When I saw the first trailer for MYSTIC RIVER I practically flipped out. I guess not like one of those “geek-gasms” my bud Harold Knowles talks about but more like getting goose-shivers or the hair standing up on your balls or whatever the saying is. I already knew it had cleaned up at the Whatsisdick Film Festival over there in wherever it was, and that it was directed by my man Clint, who actually did the narration for this trailer. There was no scenes from the movie, just a helicopter shot of the town with the narration and then the credits start telling me, okay: Sean Penn, Tim Robbins, Kevin Bacon, Laurence Fishburne, Marcia Gay Harden, Laura Linney… and then it says, “A Film by Clint Eastwood.” It gives you no clue what it’s about really, just shows you the setting and tells you the players and figures that if that’s not enough for you then you must be an asshole. “That’s all I need to know,” I said, but really I already knew more – that it was written by oscar winner Brian Helgeland, director of outlaw award winner PAYBACK. 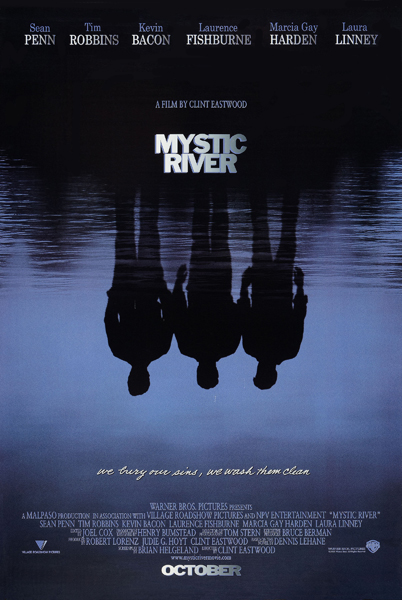 I mean I was very excited for this picture so naturally what I did was, I put off seeing it for months and then when I finally did see it I was kind of disappointed.

Don’t get me wrong though, it’s a pretty good one. Just not by Clint standards. The whole cast is great, especially Mr. Penn as the ex-con who has to deal with his daughter being murdered and then with the suspicion that it might’ve been a childhood friend that did it. Pretty depressing, of course, but especially since it all stems back to a childhood incident where Tim-Robbins-as-a–kid gets kidnapped and molested. I always say, any movie that starts out with child molesting is gonna be kind of a bummer, in my opinion.

For most of this movie I was wrapped up in what was going on, watching the gears slowly grind until they get too jammed with meat, then the whole machine flips out, there’s a bunch of twists and out of the blue Laura Linney (who has had hardly anything to do for most of the movie) makes a big speech like she was the lady from Macbeth, I forget her name, the gal with the blood on her hands. (This out of the blue shakespearianism is one thing alot of people like about the movie, but Clint lost me on that one.)

If I was going to go by running time – you know, percentage-wise – I’d have to say I liked this movie alot, because for the whole middle part of the movie I thought everything was about perfect. It was really only two parts I didn’t like, but those two parts were the beginning and the end. I guess 1 out of 3 is okay but still, the beginning and end are pretty important parts to me.

The opening is the kid versions of Robbins, Penn and Bacon, playing street hockey and then two child molesters dressed as a cop and a priest kidnap little Tim. The whole idea is so scary, but it’s hard to take seriously when the Sean Penn character is wearing a leather jacket and trying to act all tough. Believe it or not he even says, “Hey, you know what would be fun – stealing a car.” I was like, Clint, man, what are you doing? They might as well have the kids all wear the same outfits and hairdos as their adult counterparts, like the Royal Tenanbaums. Or better yet, have Sean Penn and everybody actually play the kids, but shoot ’em in hobbitvision. That’ll get him the oscar.

I never seen that GRUMPY OLD ASTRONAUTS movie Clint made but I heard they have a part where Clint and friends dub their voices onto the actors who play them when they’re younger. So maybe he just has a problem with this younger version business. His one and only weakness. Have at it, fuckers. This is your only shot at the man because otherwise, Eastwood is invincible.

My problem with the end of the movie – you gotta stop reading if you haven’t seen it because I’m about to give away the end of the movie, obviously. Well I would’ve been fine if everything went as planned, and Mr. Robbins was the one that killed the girl, and then Mr. Penn would find out and something bad would happen. I’m a grown adult, I don’t always need a fucking third act plot twist to keep me satisfied at the motion picture cinemas. I woulda been perfectly satisfied to sit there dreading the inevitable until it happens. That’s what suspense is about. But when it turns out that somebody else killed Penn’s daughter, that’s fuckin movie bullshit, even if it comes from a book. The book is fuckin movie bullshit. No way do I believe that there were two murders at the same time on this day, and that Tim Robbins never let on to his wife that it was a child molester that he murdered, or especially that the girl was killed by some kids who were trying to scare her because they didn’t want big brother to leave them. And by the way what’s this shit about the kid is not actually mute – is that like pretending you need a wheelchair, but at the end you’re walking? Or you can’t move your right arm, but then Matlock throws a baseball at you in court, and you catch it with your right hand and the jig is up? They might as well do the whole scooby doo mask thing at the end if they want to treat us like fuckin pokey-man watching little crumb crushers. I mean jesus, don’t treat me like a little fuckin baby. I want grown up movies from my man Clint.

Other than that though, A+ man.

Clint Eastwood Kevin Bacon Laura Linney Laurence Fishburne Marcia Gay Harden Sean Penn Tim Robbins
This entry was posted on Sunday, January 18th, 2004 at 8:07 pm and is filed under Crime, Drama, Mystery, Reviews, Thriller. You can follow any responses to this entry through the RSS 2.0 feed. You can skip to the end and leave a response. Pinging is currently not allowed.

One Response to “Mystic River”