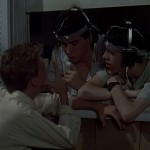 To be honest I had written off the possibility of good Stephen King-based movies a while back. It seemed like that whole thing had run its course, but then I saw THE MIST and that was an enjoyable one. So I gave 1408 a shot, what the hell.

John Cusack plays a writer of haunted places guidebooks travelling around to allegedly haunted rooms, testing them, staying the night and writing about them. But he’s kind of a dick about it and doesn’t even believe in ghosts. And it’s indicated that something tragic happened in New York that caused him to leave his wife. But now he wants to go back to New York for the first time to stay in this room he found out about, 1408 at the Dolphin, where a whole bunch of people have killed themselves. And of course he gets in, the room terrorizes him for real, he learns about himself and explores the traumas of his life and faces why he left his wife. Spoooooky.

This is kind of off-topic here, but over the last year or so I have found myself in strong opposition to the sarcastic “really?” You know, let’s say someone is riding their bicycle on the sidewalk and they crash into you, and they say, “Hey, watch where you’re going!” You would turn your voice real snooty and seay “Really? You’re riding your bike on the sidewalk and you’re really gonna blame me for this?” That’s the sarcastic “really?”, and in that case it’s kind of justified. But more often than not the technique is being abused, used to feign incredulousness at things that aren’t that extreme. It’s overused. Some of my friends use it too much, John Stewart uses it too much, Saturday Night Live Weekend Update even has a whole segment based around it. Really? You’re really gonna do a whole segment called “Really?” I say quit it.

But if you were the type to use that there would be a whole lot of Stephen Kingy elements here to use it on. You would use it to turn your nose up at Cusack writing all these books even though he thinks they’re bullshit. At him having that one book he wrote so long ago that was personal and meaningful. At Samuel L. Jackson, as the manager of the hotel, being familiar with his complete bibliography and hassling him about what the early book says about his relationship with his father. About the hotel staff knowing the room is deadly but having it cleaned once a month. And especially about them letting this guy stay in the room just because his publisher threatens them with a lawsuit. Like they can’t just say it’s being repaired.

Plus you got the usual Stephen King shit: famous writer protagonist, marital troubles, alcohol, old pop song that keeps playing in a spooky context (in this case “It’s Only Just Begun” by the Carpenters – a good choice if you must drag out this old cliche). As part of my October viewing I also watched an episode of the King mini-series NIGHTMARES AND DREAMSCAPES. It’s the one called “Battleground” where William Hurt plays a hitman whose penthouse is invaded by haunted army men toys. At one point Hurt climbs out the window and carefully walks around the ledge, high above New York City. I thought “Hey! That same thing happened in CAT’S EYE!” Well, sure enough, same thing happens in 1408 too.

So, you know, there’s some silliness you have to swallow even aside from the Evil Hotel Room. But I think it’s a pretty decent movie anyway. For one thing, the construction of the story is pretty smart. First it sets up the character in his normal life, including a signing at Borders attended by 3 people, which seems pretty realistic for those types of books. He jokes around but you sense he’s unhappy, and in these scenes they drop a couple hints about things in his life that will come up later, and give him a near-death experience so you can wonder whether what we’re seeing is reality or hallucination.

Then it gets to setting up the horror, with special guest Samuel L. Jackson. He’s the hotel manager intent on talking this author out of staying in the room. In my Seagalogical and other action studies I always talk about the “Just How Badass Is He?” scenes where a military commander, a police captain or a villain hypes up the hero, listing his medals and training, what countries he’s fought in, maybe some story about some incredible thing he did in the past. He ripped off a guy’s leg, only survivor of a poorly timed volcano expedition, it’s like he’s a ghost etc. Well, this is the horror equivalaent of that, Sam Jackson doing the “Just How Evil Is It?” speech to hype up this room. Cusack’s heard it, he recites along with the stats about how many people killed themselves there. But Jackson starts telling him about the natural deaths too. And the sick details. Showing him photos. Telling about the precautions they have to take just to clean the room, and the tragedies that happen anyway. None of this fazes him so Jackson sums it all up succinctly: “It’s an evil fucking room.”

So by the time he walks in there you’re ready for some serious scares. It’s a great buildup. The movie does deliver, but maybe doesn’t live up entirely to the buildup. Lots of weird ghostly shit happens, and it stays pretty entertaining. But I think maybe part of the problem is from me connecting it to this action movie formula. We got this badass room and we got this guy trapped in a small area. What we don’t have is a strong physical goal for him to accomplish. In alot of these stories the hero would have to figure something out, a way to escape or something. There’s a little of that but soon you realize that the only thing he can do is wait it out. Try to sit around not dying for 12 hours and then it will be the next day. That’s cool and all but maybe recreating the feeling of insomnia is not the most exciting use for a movie. Ultimately he’s not passive, it’s through his own doing that the author vs. hotel room conflict ends, but it’s a pretty simple, not exactly clever thing he does all the sudden, so it’s not exactly John McClane material here.

But the other thing that helps the movie overcome its weaknesses is Cusack. He seems angry and tormented enough for you to believe the character but also he has a dark sense of humor that comes through sometimes and livens things up. One of my favorite parts is a little smartass comment he makes. He’s stuck in the room and (again, like a DIE HARD movie) tries climbing through a vent. But when he gets in there he starts seeing other parts of his life through the vents into the other rooms, and gets attacked by some freaky monsters and shit. He goes through this whole long ordeal, doesn’t make it anywhere and falls painfully through the vent back into the same evil room he was trying to escape from. And he says, “Well, it’s good to be back.”

1408 is a pretty solid mid-level Stephen King movie. It’s definitely no CARRIE or THE SHINING but it’s not a bad use of your time.

i stayed in room 1408 as research for a travel/supernatural oriented book. the room is very nice with pleasant wallpaper and furnishings. very roomy with plenty of light and a view of the city. staff is helpful although too scared to enter room. there was a problem with the thermostat but they fixed it. my only complaint is that the room is fucking evil, i kept seeing people jump out of windows, my dead daughter, was frozen, burned, the room was destroyed and repaired several times, i woke up from a near death experience outside of the room and later was back in the room, the police could not find me in the room, a weird zombie baby thing attacked me in the vent, i cut myself, got weird phone calls from the front desk trying to get me to commit suicide, an imposter called my wife on a webcam and told her to come when really i didn’t want her to, and i had to set the room on fire. also the mirrors don’t work properly and the items in the mini-fridge are extremely overpriced. i am somewhat of a travel writer though so i am picky, the layman would find room 1408 to be a charming and affordable place to stay while visiting the big apple.

Stephen King
This entry was posted on Wednesday, October 15th, 2008 at 11:31 am and is filed under Horror, Reviews. You can follow any responses to this entry through the RSS 2.0 feed. You can leave a response, or trackback from your own site.