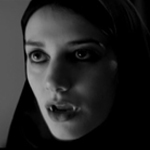 The title refers to “The Girl” (Sheila Vand), a quiet, lonely young vampire woman who from some angles looks strikingly like Winona Ryder. She wears a striped shirt and a black veil, which cuts quite an image in the film’s nice black and white cinematographism by Lyle Vincent (Sesame Street: Elmo Visits the Doctor) as she spookily skulks in the shadows and follows people or just stands there watching them like a creep or a Michael Meyers or an it follows.

Ms. The Girl may have a bit of a vigilante or feminist avenger type streak, because we keep seeing her bite the necks of assholes who mistreat prostitutes. There seem to be less than a dozen people here in Bad City, as it’s called, yet there are hookers, junkies and drug dealers. Not a great neighborhood for raising a family in my opinion if you were wondering. I mean really kids shouldn’t be too sheltered either but I just think you could find a better balance between safety and life experience than this shithole. I mean what are you gonna do after 5 pm other than prostitution or drugs, it doesn’t seem like there’s much else to do there.

There’s also this young guy Arash (Arash Marandi) who seems nice, he has kind of a pompadour and wears white undershirts and loves his car, like the dreamy anti-hero of a ’50s juvenile delinquent b-movie. When he finds a gangster dead at the fangs of the girl he steals his cocaine so he can finally make a good living. Meanwhile he meets the girl and tries to strike up a relationship, not understanding that when she says “I’ve done bad things” it really is stuff worse than what he’s done.

Since she doesn’t talk or do much her personality is mostly up to interpretation. Her wall is plastered in posters: Madonna, the Bee Gees, Michael Jackson. This kind of reminded me of how the Iranian heroine of the cartoon movie PERSEPOLIS seemed very American in her musical obsessions, showing how truly international the phenomenons of ’80s pop music were. But also it’s kind of a social media approach to characterization. “Here is a list of the things I like, that is who I am.”

At one point Arash tries to figure her out by asking the last song she listened to. She says “Hello Hello” [sic] by Lionel Richie. So I guess she’s a lonely voyeur who loves from afar. You’re all she’s ever wanted and her arms are open wide. Good touch. And the music on the soundtrack – obscurities, not pop culture touchstones like what’s on her wall – is pretty cool. Very eclectic, some British, some Iranian, some punk, some like this:

This one is all about tone and mood. The quietness and long takes remind me of early Jim Jarmusch. At one point they go so long sitting in a car not saying anything that I wanted the cat in the back seat to come up with some icebreaker. “So… how did you two meet?” Something like that.

But Jarmusch movies tend to have more ideas than this, more quirks for the characters, more things for them to talk (or not talk) about. For me at least they always have more themes to chew on and decipher afterwards.

The highlight of this one is the character of Saeed (Dominic Rains, MASK OF THE NINJA), the dumbass drug kingpin who takes Arash’s beloved car to cover his junkie father (Marshall Manesh, TRUE LIES, BARB WIRE)’s debt. This guy looks like Roger Guenveur Smith with face tattoos and a six-pack. He’s alot like Alien from SPRING BREAKERS but stupider, more Ali G. He has a tattoo over his Adam’s apple that says “SEX.” It’s like a little boy inhabits an adult body BIG style and got way out of control. He brings the girl to his crib, which is decorated with tigers and pot leaves. He goes and picks up a dumbell and does a couple arm curls for her, then turns on some kind of EDM (electronical dancing music) and dances shirtless in front of her. 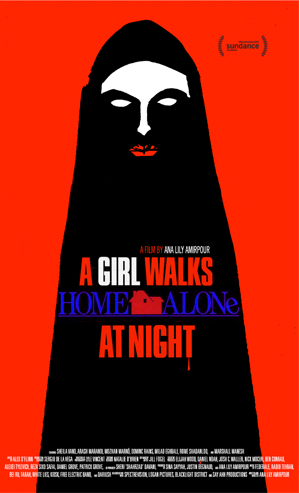 It’s alot of big laughs right at the beginning, but then he’s gone. He deserves what he gets, but be careful what you wish for, because the movie is never as entertaining after his departure. (I was gonna say “after he bites it,” but obviously she does all the biting.)

There’s a quote about director Amirpour that gets repeated alot in the press about her: the creative director from Vice (who distributed the movie) said “She’s the next Tarantino, man. Count on it.” And at least one person I talked to said he heard this movie compared to Tarantino. I’m sure the guy just meant he thought she was an original voice or something. Don’t take him literally, because there’s nothing Tarantino-like in this movie, for good or bad.

I don’t think this one lives up to the hype, or my hopes for it. It certainly does not strike me as as promising a debut as RESERVOIR DOGS, for crying out loud, either in writing or directorial chops or overall entertainment value. It’s got a good vibe to it, I like where it’s coming from, but it doesn’t really have enough story or imagination to stay interesting all the way through.

But I don’t want to be too hard on it. She’s doing her thing, and she’s got enough going that I believe her style could grow into something stronger. I hope so, because her next movie stars Jason Momoa as a cannibal, plus Jim Carrey and Keanu Reeves, and she has described it as “EL TOPO meets DIRTY DANCING” as well as “ROAD WARRIOR meets PRETTY IN PINK with a dope soundtrack.” I mean, I would have to be an asshole not to give a shot to a movie described that way.

So hopefully she’ll do a good job directing that and then she’ll just be executive producer for whichever up-and-comer directs A GIRL WALKS HOME ALONE 2 LOST IN NEW YORK AT NIGHT.

Ana Lily Amirpour Arash Marandi Iran Sheila Vand vampires Vice Films
This entry was posted on Wednesday, April 22nd, 2015 at 9:21 am and is filed under Horror, Reviews. You can follow any responses to this entry through the RSS 2.0 feed. You can skip to the end and leave a response. Pinging is currently not allowed.

35 Responses to “A Girl Walks Home Alone At Night”