But it starts out on a Bruce Lee note. The opening credits have Brandon Lee in a white tank top like his dad sometimes wore, doing martial arts in front of a black void. His character is raised in Hong Kong, and sometimes speaks Chinese, and is living in the shadow of a father everyone admires. In an interview included on the DVD Lee mentions that the movie was written specifically for him, which isn’t surprising. 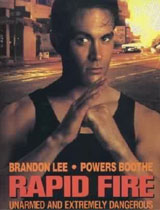 Lee’s character Jake Lo is introduced on a motorcycle, wearing a leather jacket, which means he’s an individualist and an American despite growing up in China. He was there when his father was run over by a tank in a pro-democracy demonstration. Now he’s an American college student and the Chinese political activists on campus try to drag him into their cause because of who his father was, but he’s not interested. You never really appreciate your father in the first half of your movie, do you?

Jake happens to witness a crime boss murdering somebody, and is witnessed witnessing it. So now a cop (Powers Boothe) wants him to be their star witness, some crooked cops and gangsters want him to be dead. The way the two leads meet is great. Lee gets stuck in a gigantic alley shootout, unloads multiple guns, dodges many different calibers of ammunition, jumps through garbage, does a bunch of somersaults. Suddenly Boothe drives up in a car and yells at him until he gets in. They’re being chased by another car so Boothe stops his, gets out and unloads a rifle into the enemy car. It catches on fire, then crashes, then flips and explodes, lands, burns some more, blows up some more. Boothe gets back in his car, peels out, and turns to Lee and says, “Hiya.”

The movie follows my theory of badass juxtaposition, because Jake is an artist. Okay, they don’t keep coming back to it to show his sensitive side, it’s not that big of a deal. But it allows him to flirt with the nude model from his class and also to make a sketch of the suspect for the police.

If you just know Lee from THE CROW you might not know how serious he was about action. This is a full-on martial arts movie, at least in the American sense of Seagal and Van Damme. Lee has lots of great moves flipping tables, doing somersaults, jumping over ledges, shooting, running away just before a bullet hits, ducking as he’s showered with debris from bullet hits, kicking doors into people’s faces, hitting people with freezer doors, kicking through walls, kicking out metal bars, stabbing a guy with a fork, breaking a stick in half to use as two clubs, knocking a column down with his shoulder so a balcony will collapse on a guy. In a tribute to shoeless John McClane he gets into trouble while not wearing a shirt, but in a testament to boy scout preparation he happens to be wearing the shirt tied around his waist so he can put it on later. (Remember in the ’90s how those dweebs would wear their flannel shirts tied around their waist? There was a guy on MTV who always did that and I thought Jesus, you can’t just put it down somewhere in the studio? What kind of security do they have in the MTV studio, a guy has to walk around clinging desperately to his shirt so nobody rips it off?) He drives a motorcycle the longest possible way through a glass cabinet. He does a move where a guy grabs one of his feet so he jumps up and kicks him in the head with the other foot, which I believe was one of his trademarks.

Best of all this is a more badass model of Brandon Lee. In THE CROW he’s the gothy weirdo ghost, in SHOWDOWN IN LITTLE TOKYO he’s the straightlaced nerd, but in this one he’s the tough guy. I mean I already mentioned the motorcycle and it’s not a Kawasaki ninja or nothing. He gets to play brooding and cocky, and has a couple of badass lines. I like after witnessing the shooting, he’s being interrogated by the cops and not being very cooperative. One of the cops says “You know what I think? Maybe this is the guy that did it.”

Lee looks at him in disgust and says, “The guy that did it needed a gun.”

Another good one is at the end, he explains the fate of one of the bad guys by quipping, “He’s at one with his ancestors.” That could be a Seagal line come to think of it.

I remember this as being a pretty good movie when I saw it years ago, but to be honest there was exactly one thing I remembered about it: when the cops who are supposedly defending him try to kill him, he pulls out a drawer and tosses all the silverware into a crooked cop’s face. That is a great move that I recommend everybody remember just in case. The movie itself could never live up to the move, but it’s still pretty good.

It’s got some pretty standard action movie tropes. There’s a female cop who shows him her father’s file, teaches him what a great man his father was, and then they

immediately have sex. It’s got Al Leong in it too. He’s the first bad guy you see, he’s by the villain’s side the whole time and never fights Lee until the last ten minutes. And he puts up a hell of a fight, he almost seems like he could beat him. In some cultures it’s considered a sign of good luck if Al Leong’s character survives even halfway through a movie.

Director Dwight Little is the guy who did HALLOWEEN 4 and FREE WILLY 2. So I’m not gonna build a statue of him yet. But I do think he’s a pretty good action director. Of course I could (and did) write a whole chapter about his MARKED FOR DEATH, a great golden age Seagal picture that many of my fellow Seagalogists consider the big man’s best. If I had to find a common motif between the movies it would be the delight in destruction of rich people’s elegant crap. I believe it’s a Tiffany’s that gets torn to shreds in MARKED FOR DEATH, here it’s somebody’s mansion or something, but in both cases it’s enjoyable to watch. RAPID FIRE  also shares with MARKED FOR DEATH a performance by Basil Wallace (he played the villain Screwface in MARKED, a cop in this one) and a healthy respect for setting up and paying off. For example when Lee goes into a restaraunt as part of an undercover operation the first thing he does is glance around, checking out the layout of the place, where the stairs are, the balcony. And he uses all of these things when the shit goes down. There’s a shot of the bartender using a library-style wheeled ladder to get to his vast collection of alcohol, and later on this same ladder hits Lee in the face (possibly cinema history’s first ladder POV shot).

I’m gonna have to re-watch a couple other Lee movies but so far I’m thinking this is his best.

Al Leong Alan B. McElroy Brandon Lee Dwight H. Little Powers Boothe
This entry was posted on Wednesday, July 22nd, 2009 at 12:17 am and is filed under Action, Martial Arts, Reviews. You can follow any responses to this entry through the RSS 2.0 feed. You can skip to the end and leave a response. Pinging is currently not allowed.