Doing a blaxploitation homage in 2009 sounds good on paper, because there are a finite amount of authentic movies of this genre. At a certain point you run out of blaxploitation to watch, and you need more. It never hurts to have backups. But when you think about it there are a million ways for a movie like this to be disappointing or worse. BLACK DYNAMITE has great posters and trailers, but that doesn’t prove anything. For my tastes it’s a fine line to walk. I didn’t want to see something too jokey or spoofy, something that was mocking these movies more than paying tribute to them. And there’s no reason to assume an independent film out of nowhere from filmatists without that much of a track record will capture a vintage blaxploitation feel. 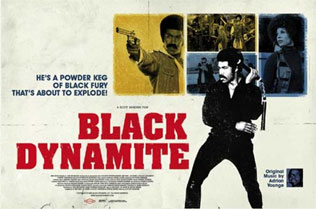 I could’ve worried about that shit but it would’ve been a waste of time, because BLACK DYNAMITE is pretty god damn spectacular. Yes, it could be accurately described as a parody of the genre, but clearly a loving, even worshipful parody done not by some smarmy assholes who want to laugh at funny old clothes and hairstyles, but by dudes who clearly have passion for and knowledge of the genre and a fetishistic attention to the details that matter.

Somewhere I saw somebody compare this to AUSTIN POWERS. I don’t consider that accurate. Those movies are all about riffing on different comedy concepts within some of the trappings of an old genre. You could say the same for I’M GONNA GIT YOU SUCKA. That was an affectionate blaxploitation homage, but it’s coming up with joke concepts, like “this guy has theme music, so what if we show a band following him around playing his theme music?”

Not that there’s anything wrong with that approach, but I was happy to see BLACK DYNAMITE play it much more straight. The laughs (and there are many) mostly aren’t jokes exactly. They fit within the context of a straight-up blaxploitation movie. Sure, BLACK DYNAMITE knows that its story is getting more and more ridiculous, and purposely has messed up shots and clunky dialogue like “I was the best CIA agent that the CIA ever had in the CIA.” But it never winks at you, never nudges you. It could be the blaxploitation movie they would’ve had on another GRINDHOUSE double feature if the first one hadn’t tanked.

Let me give you one example of why I respect this movie. There’s a scene where Black Dynamite goes to a bar called The Hip Pocket to get some information out of a bunch of hostile dudes in Rudy Ray Moore style velvet hats. They’re not helping much so he turns around to head for the door, and they taunt him to his back about never coming back to the Hip Pocket again. But they shut up real quick when he flips the sign on the window to “closed” and shuts the gate. He’s not leaving, he just wants some privacy while he beats them silly.

See, that’s not a joke – that’s a genuine Badass Cinema moment. You don’t do that in AUSTIN POWERS or I’M GONNA GIT YOU SUCKA. White and director/co-writer Scott Sanders can get laughs by exaggerating the plot of THREE THE HARD WAY and imitating the sloppy filmatism of the Rudy Ray Moore pictures, but it’s clear that they also sincerely appreciate and want to re-create the badass screen presence of Fred Williamson, Jim Brown and Jim Kelly. In UNDERCOVER BROTHER, even in DOLEMITE, you laugh at the idea of the hero kicking ass. You don’t laugh at Black Dynamite. When he kicks people through walls you laugh not because it’s a joke but because it’s awesome. He is not a parody of awesome, he actually is awesome.

I gotta admit that it crosses the line into straight comedy about 2/3 in when Black Dynamite spells out on a chalkboard the nefarious plot that they’re up against. From that point on it gets way more silly, especially if I didn’t dream the part where he’s helped in a fight by the ghost of Abraham Lincoln. But it’s funny shit, and I appreciate that at least for a while they were able to treat it not as much like a comedy as like the craziest and most awesome blaxploitation movie you never found out about before.

None of this would matter if it even halfway felt like a modern movie, but they have the blaxplo look and feel dead on. Apparently it’s shot on real film and processed in some forgotten way that makes it grainy. And it uses some stock footage. But I’m unclear how they got all the buildings and streets to look so perfect.

The most crucial and impressive aspect is the music. I’m picky about this shit so if I’d given it much thought I would’ve assumed the music would be the weak link in the movie. It so easily could’ve gotten laughs from some cheap wah wah guitars and cheesy studio musicians. But it’s much harder to make it sound real. How do you compete with Curtis Mayfield, Isaac Hayes, Johnny Pate? Even the musicians who actually played funk back in the day have a hard time recapturing it now.

But somehow this guy Adrian Younge made a completely convincing 1970s soundtrack. It’s not just the wah wahs but the percussion, the organs, the flute. Even the vocals and Lalo Schifrin-type dramatic stings sound completely vintage. And I didn’t notice him imitating specific songs either, just all the best of the styles that were used at the time. I mean, I have seen plenty of actual blaxploitation movies where the soundtracks weren’t as good as BLACK DYNAMITE’s.

I wondered where they found this guy, because I never heard of him. According to this internet here he’s an old friend of Scott Sanders, he also edited the movie and he played every instrument on the soundtrack. I want to give this guy a medal, and I want to give myself the soundtrack on CD (if not vinyl).

So everything is in place, but as with almost all the classic blaxploitation movies the main thing you’re looking at is the star, and how cool he or she is. The whole movie could’ve been ruined if it had been the wrong actor who came up with the idea and starred in it. But Michael Jai White is absolutely perfect in this movie, nothing short of brilliant. He plays it 100% deadpan and has every aspect down to a science – the scowl, the heavy-lidded stare, the strut, the voice, the “kong fu.” There are a few scenes with jokey fake martial arts (one of his allies, Bullhorn, is modelled after Dolemite) but White has seven blackbelts, so there’s tons of real action here. And he uses nunchakas alot.

I consider myself a Michael Jai White fan. I didn’t catch on as fast as some of you talkbackers, who I remember insisting he had to play Blade on the TV series, and I wasn’t sure where that came from. But UNDISPUTED II made me understand. Since then I’ve gone back and watched some of his other roles, like the TV movie of TYSON and the previous Scott Sanders film THICK AS THIEVES (and of course I knew his work in EXIT WOUNDS, where he and Seagal have a sword fight with paper cutter blades).

White is a rare commodity in Hollywood, a legitimate action star/actor. In the old days you had action stars trying to act, and these days you have actors trying to be action stars. White has been able to straddle that line and this is clearly his greatest role so far, giving a perfect performance most other martial arts guys couldn’t do and martial arts that most actors couldn’t do. I’m so happy to see him in a movie that showcases his range of talents.

Sanders was there to give a brief introduction before the movie. Because it was a midnight show I figured he wouldn’t stick around for a Q&A. But right after the wildly applauded end credits he ran up to the stage and to my surprise introduced Michael Jai White himself. Judging by the questions I don’t think most of the crowd knew who he was (what was that movie he was in? DARK KNIGHT? never saw it), but it seemed like they were genuinely excited to see Black Dynamite in person. I was well-behaved and didn’t yell out any questions like “Why is UNDISPUTED II so awesome?”

I’m not sure it was meant as an entirely serious question, but somebody asked if he was worried he would get typecast as “a black action hero.” White semi-defensively talked about being in an upcoming Tyler Perry movie. But I say fuck that, man. If you would rather do dramas that’s cool, but you’ve worked hard to be a great action hero. You’re only getting started here. I want to see more.

In the movie there’s a joke about Black Dynamite never smiling, but when White came up to that stage he was beaming like he was a kid and we were singing happy birthday to him. After all these years taking small parts in Troma movies, in Hong Kong movies, getting a major starring role only to have it become one of the worst comic book movies ever, having a great scene in KILL BILL only to have it cut out… this guy has earned a shot at the next level, but instead of being given it he went out there and made it himself.

BLACK DYNAMITE comes to theaters September 4th. I’m sure some people will see it and say I’m overhyping it. I wouldn’t try to talk somebody who’s not into this type of thing into seeing it. But if you are a fan of blaxploitation and can enjoy an absurd take on it, BLACK DYNAMITE is required viewing, preferably with audience. Please consider seeing it so that maybe we’ll get BLACK DYNAMITE IN AFRICA or BLACK DYNAMITE T.N.T. or something.

blaxploitation Michael Jai White Scott Sanders
This entry was posted on Sunday, June 7th, 2009 at 9:54 pm and is filed under Action, AICN, Comedy/Laffs, Reviews. You can follow any responses to this entry through the RSS 2.0 feed. You can leave a response, or trackback from your own site.

28 Responses to “Vern is down with BLACK DYNAMITE”