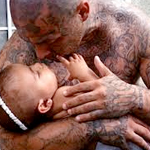 I thought Cinerama got the exclusive because they’re one of the few places that can project 70 mm, which is what this was filmed in (Panavision Super 70 if you want to know the name brand) but then it ended up being released only in digital computer file form anyway, by request of the filmatists. “SCREENED IN 4K” they call it. I would complain except it looked great, so I’m sure they knew what they were doing.
SAMSARA is the story of some monks blowing on some horns, and there are sand dunes and flooded houses and some babies are being baptized, they smash a bunch of cars, hit golf balls, there’s a mummy, that type of thing. Pretty typical Hollywood fare but this one you might be interested to know is from the creators of BARAKA, a movie the hippies enjoy that I haven’t seen. So I’m not sure if this is a sequel, prequel or reboot of this popular licensed franchise property trademark.

I think the only one I’ve seen in this genre is KOYAANISQATSI, the one about how there are factories and traffic and stuff in time lapse while Philip Glass music plays and throat singers chant the title of the movie 750 times in a row. That was the godfather of this type of highbrow mondo movie where there’s footage of different things going on around the world, but instead of fucked up shit with turtles getting their bellies split open and stuff it’s mostly beautiful imagery. Then the bellies split open and then back to beautiful at the end.

Ron Fricke was the cinematographer for KOYAANISQATSI before he said “fuck this shit” and graduated to director for BARAKA and SAMSARA. (Apparently he also shot volcano footage that they used for the historic Mustafarian “I HATE YOU!” light saber duel in Star Wars 3. But keep that on the down low so people don’t show up at his SAMSARA Q&As crying to him about George Lucas this and George Lucas that.) 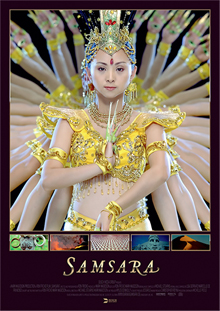 SAMSARA starts out like you’re God on His day off, deciding to float around the world and take in all the good shit: a row of colorful temples that look straight out of a fantasy movie, lava flowing out of volcanoes (no light sabers), heavily bejewelled dancers, wind blowing across sand dunes, smiling Buddhist child monks ringing bells, glorious paintings on the ceilings of cathedrals, colorful mosaics on the floors of temples… we also see the aftermath of destruction, but photographed in such a way that we can’t help but notice the natural beauty that occurs despite everything. Miniature sand dunes inside what was once a house, geometric cracks in the dried mud inside buildings destroyed by hurricanes. I’m thinking it’s Katrina ’cause there’s pinups on the wall that look like American teenagers, there’s a Spongebob doll… but then in another shot I see a book called The Village That Allah Forgot. Is this America? Is this Indonesia, maybe? Is it cutting seamlessly between different cultures, proving how much we have in common?

I don’t think there’s a plot, but maybe I just couldn’t follow it because I didn’t see BARAKA. Or maybe if I did I’d be disappointed because this is too much of a rehash with cute callbacks and in-jokes that were over my head. I wouldn’t know. There’s no talking or explanation of any kind. The non-verbal, world-jumping feeling and all the questions raised about where and who is shown is a big part of what’s great about the movie, but I also would love to watch it with a commentary track some day, because I’m sure every shot has a big story behind it. The locations, the cultures, the specific people. How did you get those Philipino convicts to stand still posing like models? How many takes did you need of that?

Several different religions are represented. Maybe the most impressive footage is of Mecca. I mean, I know what that looks like, but I never saw it SCREENED IN 4K before. There are literally thousands of people on screen and you can pick them out individually and follow them. Hey, why is that guy turning around? Who is he talking to? But you see these awe inspiring sights from entirely different spiritual paths but they seem kind of the same, because they’re people following ancient traditions, putting all their passion and resources into creating these monuments to their beliefs. By weaving between them without discussion they become united.

I love the way one or two edits can say so much, like in the famous 2001 cut from the bone to the space station. My favorite in this one goes from a closeup of an African woman in an elaborate headdress holding her child to a wide helicopter shot of the (L.A. I believe?) freeway system. Then we see an American man completely covered in tattoos lovingly cuddling and kissing his baby daughter. From a tiny village to a sprawling metropolis, but we’re not all that different. Later, after a section about the manufacturing of guns and ammunition, we go back to the African tribe, and now they’re holding rifles. Before they were this exotic beauty, now there’s some threat there.

See, there’s all the beautiful stuff, but then you get into 20 minutes of terror. It starts with chickens as far as the eye can see – fluffy, clean looking chickens, I noticed – getting sucked into some kind of machine. Then it’s a factory assembly line where the carcasses go. We all know where meat comes from, and we’ve seen slaughterhouse footage, but something about this mundane factory setting is upsetting. Huge sows lay next to a pile of shit while all their babies suckle on their nipples. Cut to grown pigs being slit open and having their intestines removed. Before long we watch an overweight family eating at a huge, crowded Burger King. I feel bad for this family. I don’t know if they were told “This is a movie full of gorgeous temples and natural beauty and then you’re gonna be eating burgers to represent the excesses of American culture. It’s gonna be great!”

It gets pretty crazy. It goes from preparing for plastic surgery to painting mannequins to molding sex dolls to auctioning pole dancers. The dancers stand still and are indistinguishable from the sex dolls or the creepy, realistic-ish robots. In the one possibly out of place scene some performance artist dude slams clay all over his face and paints creepy mouths and noses and flips out. (At that point I figured it was Rated PG-13 For Guy Flipping Out With Clay but that was before they showed under-construction sex doll cooch.)

Also there’s a part where they make irons.

There are alot of corny ways you could describe what the movie is. The official websight chose “a nonverbal, guided meditation. Through powerful images, the film illuminates the links between humanity and the rest of nature, showing how our life cycle mirrors the rhythm of the planet.” Which is as good as any. And it says “SAMSARA is a Sanskrit word that means ‘the ever turning wheel of life’.”

To me it’s a beautiful poem. One that doesn’t rhyme, but otherwise a good one. Even with all the fucked up parts it left me thinking what a beautiful world we got here. It’s the shit that Superman would think about before saving the world from a giant comet or something. It makes you want to go to all these places and meet all these people. Even the Burger King family.

And you know what? It’s a non-verbal, non-narrative, not-really-documentary movie, and I sat in a large, full theater and everybody turned off their phones and they shut their fuckin mouths and they watched it and they liked it. And in this day and age that’s as miraculous as anything in the ever turning wheel or whatever.

HUGE ENDING SPOILER at the beginning I was wondering if this picture the monks were making out of colored sand was gonna be somehow preserved. But of course at the end they just sweep it all up. And you realize that this is sort of the wraparound story and the whole fuckin wheel is contained in that picture and all of those places and experiences mix together and become one. The picture is beautiful and temporary, its parts are ancient and colorful, it’s made by a bunch of monks who seem to be enjoying themselves. And then some girls do a dance. SAMSARA, MOTHERFUCKERS.

70mm experimental mondo non-narrative Oscilloscope Laboratories Ron Fricke
This entry was posted on Monday, September 3rd, 2012 at 1:35 am and is filed under I don't know, Reviews. You can follow any responses to this entry through the RSS 2.0 feed. You can skip to the end and leave a response. Pinging is currently not allowed.