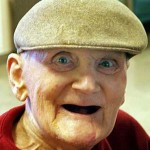 No, this is not the red guy with the giant hand. THat’s Hellboy that’s a different movie. 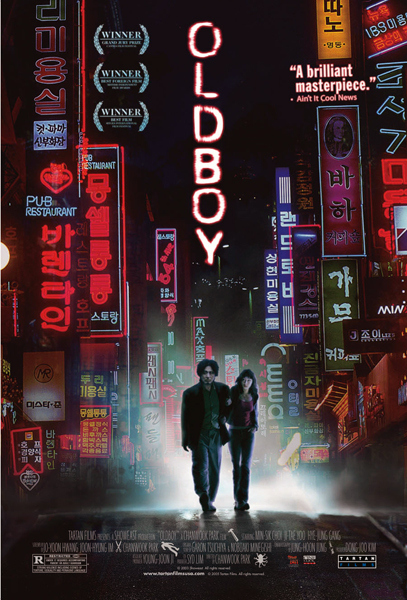 After all the hoopla, somehow I managed to not even know what this one was about. the cover of the american version makes it sound like this guy just got out of prison and is gonna get revenge. A story we can all relate to. However it turns out to be something more surreal. This guy was kidnapped and locked up in what looks like a hotel room. He didn’t know why or who or how long he was gonna be there. Turned out to be 15 years. Sometimes they would do weird shit to him. They would gas him to make him go to sleep and sometimes he’d wake up with a haircut or he’d get hypnotized. He planned his escape and then right before pulling it off they just let him out without explanation.

By the way the guy’s name is Oh Daesu or something like that but let’s call him Oldboy. Detective John Oldboy. So Oldboy gets out and yes, there is some revenge but first of all it’s a mystery where he has to find out who in fuck’s name did this to him and then when he does he has to figure out why. And also, why they let him out. Oh shit. Bad things could happen in my opinion.

In a weird way this reminds me of the great Dave Fincher picture THE GAME. The tone is totally different, but it has a similar paranoia and a world where these elaborate conspiracies can take place. Later there is a really great and ridiculous twist (actually way more preposterous and fucked up than what happens in THE GAME). This is from Korea though so it’s much more sadistic than most americans would do. There’s alot of torture, more mental than physical.

Well, physical too though. I guess the most famous thing about this movie is the way John Oldboy uses a claw hammer. To give you a hint, it is not for removing nails. Definitely the highlight of the movie is an elaborate scene where, in one long take, he fights through a hallway of gangsters using a hammer. About halfway through the crowd he falls down and when he gets back up he doesn’t have the hammer but he has a knife sticking out of his back.

I think maybe even better than this whole scene though is one little moment earlier, where he walks into the office of the guy who watches over the hotel/prison. Oldboy holds up the hammer. Then there is a freeze frame and a red dotted line is drawn from the nail remover end of the hammer to the head of the sorry motherfucker that’s about to feel its wrath. And that’s all you need, they don’t need to show it. (Don’t worry though, you’ll get your horrible hammer violence later.)

It’s actually a very sad movie. Most of it’s not fun. But I liked the part where he was sitting in his cell staring at three chopsticks and said, “All I can figure is the guy next door must be eating with one chopstick.”

This is a stylishly shot and original movie. A good combination of exaggerated colors and silly comic book logic with realistic documentary type techniques like jumpcuts and what not. And the guy that plays Oldboy is really good, lots of good deadpan looks. I liked it alot. At the same time I’m not sure I do understand why this is the one that caught on so big. I guess maybe the hammer is all. Anyway I’m not saying it’s overrated though. I’m glad I caught up with it and that when I did it was still called OLDBOY and not HOTEL VENGEANCE.

Chan-wook Park revenge
This entry was posted on Wednesday, September 21st, 2005 at 4:23 pm and is filed under Reviews, Thriller. You can follow any responses to this entry through the RSS 2.0 feed. You can skip to the end and leave a response. Pinging is currently not allowed.